Why does this government get away with murder?

In the government’s final press conference Chris Whitty, the Government's chief medical officer, said ““I would be surprised and delighted if we weren’t in this current situation through the winter and into next spring.” The significance of that statement cannot be overstated. Deaths in the UK from the virus are currently running 100 every day. (The true total may be higher.) The chief medical officer is saying don’t expect to see deaths running at an order of magnitude lower before the Spring of next year.

I fear we have become desensitized over coronavirus deaths. We keep being told by the government that they are at a much lower level than they used to be, every graph shows deaths are much lower than they were at the peak, resulting in a danger that we regard daily deaths around a hundred as somehow inevitable. But they are not inevitable. They are an order of magnitude higher than deaths in other European countries. Here is a chart of a three day moving average of deaths per day in the UK and some of our nearest neighbours over the past month. 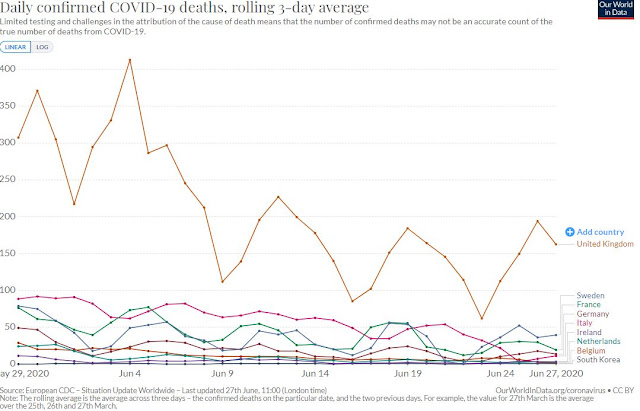 With the possible exception of Sweden, which chose not to lockdown, daily deaths in the UK are an order of magnitude higher compared to our neighbours. If you think this has anything to do with the UK’s population size, there is the same chart per capita. 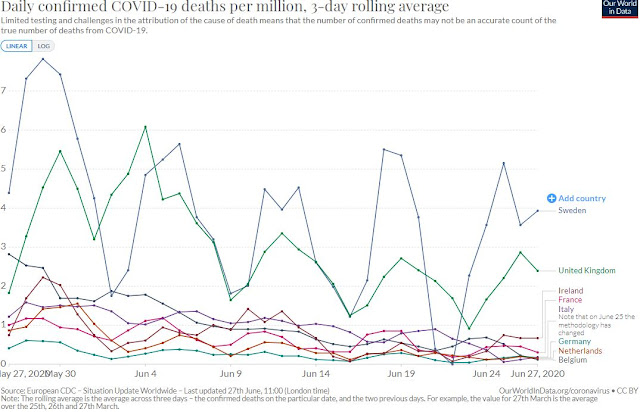 The only change is that Sweden now leapfrogs over us. From all those who write for The Telegraph and other right wing outlets saying we shouldn’t have locked down I look forward to their profuse apologies.

This comparison shows there is nothing inevitable about a hundred or more people dying from coronavirus every day. Other countries have got numbers much lower, so why can’t we? The answer is that our government has chosen not to cut numbers further. Our numbers are higher because our lockdown was less severe than in other countries, and we started reducing an already weaker lockdown while deaths were still high. The government didn’t protect care homes, and it didn’t protect medical staff. And the government decided to farm out test, trace and isolate (TTI) to their private sector friends rather than expand experienced local authorities. In other words there are a host of government failures that have led to deaths going down more slowly than our neighbours.

What is equally scandalous, but largely unnoticed by the media, is the government intends to do little to rectify the situation. That was the gist of Chris Whitty’s remarks. Let’s put 100 deaths a day in context. On average 5 people die a day from road traffic accidents. Far fewer die on average from deaths as a result of terrorism. But just think of the media publicity each terrorist incident gets in the UK. Coronavirus deaths can be just as accidental, perhaps being in the wrong place at the wrong time and being infected by a complete stranger.

One reason the government gets away with it is by playing off the majority against a minority. People are desperate to get back to normal. Businesses fear for their existence if lockdown continues. It seems churlish to spoil the day by saying we need to wait for numbers to come down further. Another reason is that the media seems obsessed about a ‘second wave’, and fails to notice the first wave is still killing more than a hundred a day. But there is no getting away from the fact that the government by its actions appear rather indifferent to people dying.

Their excuse is that they are saving the economy. This is nonsense. If daily infection numbers remain high, people will be reluctant to resume social consumption. This in turn will threaten the viability of some businesses, and lead to a lot of unemployment as other firms slim down. The government, by ending lockdown too early, is creating an economic crisis that will hit the UK in the second half of this year.

The root causes of this failure are two basic flaws in the government’s thinking. The first is penny-pinching by the Chancellor and the Treasury. I hate the word, but the fiscal space is there to save around 500 lives a week by giving support to individuals and businesses. It was the Chancellor who initiated the first relaxation of lockdown by insisting those who couldn’t work from home went back to work. The second is the Prime Minister’s dislike of lockdown which allowed the UK to flirt with herd immunity at the beginning of the pandemic and is now ending the lockdown with too many people dying.

Yet the government remains ahead in the polls. They have allowed tens of thousands of excess deaths, and continue to allow people to die who needn’t have done so, yet more people would still vote for them than the only alternative, an alternative government that does not suffer from the same flaws as this one. Incredibly 44% approve of the government’s handling of the pandemic. Trump famously boasted that if he shot someone in Times Square his popularity would be undented. This government through their incompetence and ideological blinkers have killed tens of thousands and still voters would put them back into government. If tens of thousands of unnecessary deaths cannot do it, just what will it take to diminish the popularity of this government?