Vines and Willis on the future of macroeconomics

I want to talk about the latest Oxford Review of Economic issue on ‘rebuilding macroeconomics’, and particularly the first article by David Vines and Samuel Wills. The first thing I want to say is that the title is pretentious. Academic macroeconomics is reasonably happy doing what it is currently doing and in that sense there is nothing to rebuild. A better title is future directions for macroeconomics.

The Vines and Wills article suggests two major changes in direction. The first, following Blanchard, is to partly reverse the microfoundations hegemony, by allowing models or parts of models that don’t include microfounded models routinely back into the top journals. The second is to focus on models that allow more than one long run equilibrium. I will take each in turn.

I have argued against the microfoundations hegemony for some time. My own article in this issue presents a classification of different types of macromodel that tries to extend Blanchard’s own list of types in a systematic manner. Here is a diagram that splits models according to their bias towards theoretical consistency or consistency with the data, and how detailed the models are. 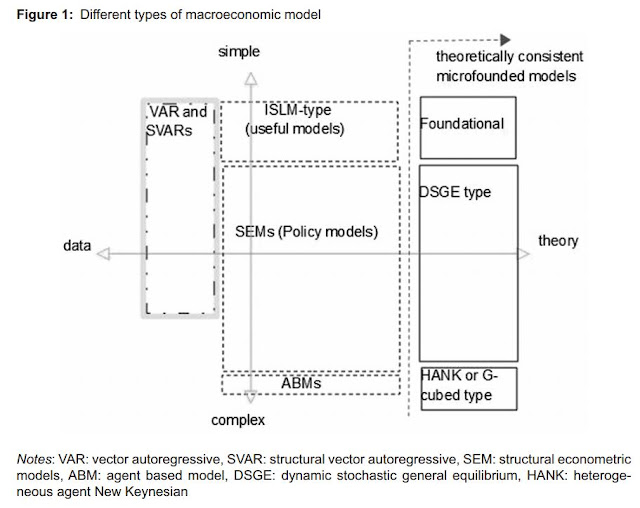 At the most data consistent, we have VARs and variations on them. In a simple VAR the only theory involved comes in variable choice, lag length and identifying restrictions. At the theory consistent end we have microfounded models, where any admissible model has to be internally theoretically consistent. These models can be ranked by complexity. What I call foundational models are things like RBC or OLG models: the kind of very simple model that would be taught in masters courses. DSGE models are the workhorse of today’s macroeconomics, which you will find in most journal articles. Once we start having disaggregated agents or sectors in a DSGE model it becomes pretty complex. However the dividing lines between foundational, DSGE and more complex microfounded models is not rigid.

SEMs are models that academics have largely forgotten about, except when they teach IS/LM type models to undergraduates. Again they can be divided up by complexity, but the dividing lines are not precise. What is precise is that these models are not microfounded, even though they may involve equations which are derived from a substantial and very up to date theoretical base. What these models, which Blanchard calls policy models and I call Structural Econometric models (SEMs), fail to demonstrate is internal theoretical consistency.

Vines and Wills call the set of all IS/LM type models and foundational models ‘toy models’. Their paper includes a nice history of macroeconomic thought focused on which toy modes have been central at different times.

Why use SEMs instead of DSGE? Because they are likely to come closer to describing the real world, and they are very flexible to change. The former is very easy to demonstrate. Imagine a DSGE model, where you take each individual equation to the data, adding in terms that are significant and make theoretical sense at an informal level. You would then have a SEM which almost surely is a closer fit to the data than the DSGE model. Greater flexibility is obvious to anyone like myself who has used both types of model. You can incorporate a new theoretical idea in a SEM in a week. To do the same in a DSGE model takes much longer, because you have to ensure internal consistency.

Most policy institutions outside academia use SEMs, although they may also use DSGE models. The Bank of England is unusual in not using a SEM, and its macroeconomic analysis is poorer as a result. By calling SEMs ‘policy models’, Blanchard makes clear that he thinks that SEMs should be an essential part of policy analysis, wherever that is done. But whatever the merit of this argument, my paper argues that this is not going to happen within academia, because the microfoundations hegemony is well entrenched and progressive in the Lakatos sense.

The only way to end the microfoundations hegemony is for central banks or the IMF to start commissioning work on equations or sectors that could be the basis of changes to their SEM model. That will then put pressure on journal editors to include empirical work which is not either microfounded or general equilibrium. This would mean that work like that outlined by John Muellbauer in his article in this issue, and work done in policy institutions all the time, can get published in the top journals. However, for reasons given in the paper, I’m pessimistic this will happen.

The other key theme in the Vines and Wills article is the need for non-linearities in models. He gives three interesting toy examples of toy multiple equilibrium models, related to asset markets, growth and inflation. Other examples, related to geography (the paper by Venables in this issue) or beliefs (the paper by Farmer) are discussed. This is all interesting stuff.

However I do query that, quoting Martin Sandbu, “there is no question this would be a very big change in how macroeconomics is done.” To just give a personal example, when I taught part of an advanced macro class in Oxford a few years ago, two of the four models I looked at had multiple equilibrium. However it is also true that non-linear models are more complex, which undoubtedly puts researchers off. This brings us back to allowing non-microfounded models to be, at the very least, a preliminary investigation of new theoretical ideas as a prelude to ‘doing it properly’, as most academic macroeconomists would say.

My other question is whether, if you want to model the impact of severe recessions on long run output, two or more equilibrium models of the kind that Vines and Wills look at are the answer. It may be simpler and also more realistic to add forms of endogenous growth to a standard model, as various people have done, which gives you hysteresis. Indeed such an approach is used (in a more informal way) by the OBR to calculate the long run impact of the COVID crisis.

Which brings me back to revolutions. Many people outside the mainstream, such as Servaas Storm here, want a revolution that removes the many things about the mainstream they don’t like. But revolutions happen because mainstream economists see that one is needed. The Keynesian revolution occurred because academics and politicians saw that depressions were not inevitable. The neoclassical counter-revolution was a revolution within mainstream academia. Because the microfoundations hegemony is progressive, there will be no revolution. Neither financial crises or pandemics are impossible to model using standard tools.

I hope this issue of OXREP, together with the earlier companion volume, will do two things. First to help give ideas to younger academics about going beyond models with a single equilibrium. Second to help economists in policy institutions to see that there are other ways of doing things beyond microfoundations, and that many of the stories they were told about why policy models have to be microfounded are not as true as perhaps they once thought.