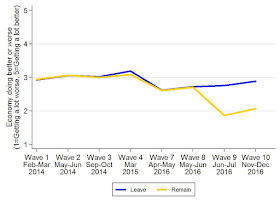 This is why Brexit means more than Brexit. It is an example of how half a nation, included its leaders, can be persuaded to embark on a process that we know will do them great harm. I cannot think of anything like it during my lifetime, and I find that both interesting and appalling. It seems to me to be imperative to understand how this could happen so it does not continue to happen.
Mainly Macro at 01:55
Share