How to pay for the Green New Deal 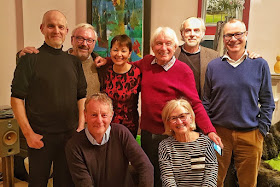 The Green New Deal has recently been promoted by a group of Democrats including the inspirational Alexandria Ocasio-Cortez. I first came across it in a report in 2008 by the Green New Deal group, most of whom are pictured above a decade later (HT Andrew Simms). The view that we face a potentially existential climate change crisis, which politicians seem currently reluctant to sufficiently tackle, and which therefore requires a government led programme on the scale in each country of Roosevelt’s New Deal, is something I share.

Why a New Deal? What is wrong with treating climate change as we would any other kind of pollution, with a mixture of regulations, taxes and subsidies? I think the answer is put rather well at the end of an article in the Economist (HT Laurie Macfarlane) which seemingly complains about the Green New Deal’s departure from what it calls ‘economic orthodoxy’. They write

“In fact, the criticism of the economic approach to climate change implicit in the Green New Deal is not that it is flawed or politically unrealistic, but that it is a category error, like trying to defeat Hitler with a fascism tax.”

I would put it in the following way. Tackling climate change is resisted by powerful political forces that have in the past prevented the appropriate taxes, subsidies and regulations being applied. Which is a major reason why the world has failed to do enough to mitigate climate change despite decades of warnings from scientists. You need something like a Green New Deal to push aside those vested interests, and get the right taxes, subsidies and regulations into place. Just as proponents of a Green New Deal are savvy about the need to overcome the resistance of, for example, the oil and gas industry, they also realise that the Green New Deal needs to be politically popular. So the New Deal package has to include current benefits for the many, perhaps at the expense of the few.

What the most effective measures are to mitigate climate change, and perhaps other global environmental disasters, is a fascinating topic. We can learn a lot from the successes so far. Solar energy is now at least as cheap as coal, oil and gas, but this was not always so. It required substantial subsidies or state help for initial development, despite protests that solar energy would always be too expensive. Once a technology is widely used it tends to get cheaper to produce because innovations continue when a mass market emerges, and that is what happened with solar energy. It is impossible to pick winners in advance, so we need to try a number of things some of which will fail. Partly because of those failures a great deal of the required research and development must come from the public sector. No stone must be left unturned when the future of humanity is at stake.

Which all sounds rather expensive, and in particular will require large amounts of public money. An interesting and important issue is how this should be paid for. In the scheme proposed by among others Thomas Piketty, higher taxes on multinationals, millionaires and carbon emissions generate funds to tackle poverty, migration, and climate change. Others have suggested that this spending is better funded by borrowing or creating money. To examine who is right, I want to talk about some of the work of John Broome, an Oxford philosopher and economist.

John Broome was a key advisor to the Stern review on climate change. He argued, and Stern agreed, that we should not discount the welfare of future generations as much as market interest rates appear to do. The reason is ethical: the current generation had no justification for valuing the welfare of the unborn less than their own welfare. This helped Stern to recommend much more current action on climate change than other US based analysis. As Broome emphasised, the key argument here was ethical not economic.

In terms of the funding debate, ethical arguments are also critical. The polluter pays principle suggests that the current generation should pay to mitigate the impact of the pollution they cause. So we should all be paying more for energy, for example, so that the carbon used to produce that energy is priced to reflect its impact on climate change. The idea that the polluter should pay makes economic and ethical sense. It embodies an idea of fairness that most people would accept.

Unfortunately this does not work well enough in practice because those with an interest in selling more carbon and their political allies make people doubt that climate change is real. In addition the connections between the prices people pay and the emissions that cause climate change are often not transparent. So how do you deal with societies that for these reasons fail to pay enough to mitigate climate change?

The argument that Broome put forward (following work by Duncan Foley) is that measures to tackle climate change can be funded by issuing debt. This breaks the polluter pays principle, but it can still lead everyone to be better off (what economists call a Pareto improvement). If government debt rather than taxes are increased to pay for, for example, investment in greener infrastructure the current generation gets away with not having to pay. If future generations have to pay back the debt used to pay for these measures, that cost falls on them, but it is more than matched by the benefits to them because of the climate change avoided as a result. In other words if you cannot make the polluter pay, it is still better to take action to stop climate change even if future generations have to pay the cost of that action.

The case for using government debt to fund the Green New Deal has been strengthened by recent observations by Olivier Blanchard. He noted that interest rates on government debt have over the last half century been below the growth rate of GDP. What this means is that a one-off increase in debt may not require higher tax rates in the future, because that debt as a share of GDP will gradually shrink.

If both these reasons for using debt finance to partially pay for the Green New Deal fail to convince, just think of it this way. No one in a 100 years time who suffers the catastrophic and (for them) irreversible impact of climate change is going to console themselves that at least they did not increase the national debt. Humanity will not come to an end if we double debt to GDP ratios, but it could come to an end if we fail to combat climate change.

All this means that the question of how a measure is financed should never prevent that measure being implemented if it has a reasonable chance of reducing climate change. The whole point of the Green New Deal is that measures should be judged on how effective they will be at achieving their goal, and not on whether they can be afforded. Funding through taxes should be the first option because the polluter should pay, but if this is not politically possible then government debt should increase.

What are the chances of either of the two main political parties implementing a Green New Deal in the UK? It is hard to see a Tory government doing so because of its aversion to debt finance, its neoliberal reluctance to have government lead the way, and because the party contains many climate change deniers. The Labour party is much better placed, and has already set out plans to create its own Green New Deal. Crucially their fiscal credibility rule makes the distinction between current spending that does need to be covered by taxes in the medium term and investment spending that does not, because future generations benefit from that investment. The Green New Deal is all about investing now to improve the welfare of future generations.