In a previous post I looked at the evidence that there was a competitiveness crisis in the Eurozone as well as a debt crisis. I concluded that it is plausible that Germany is now too competitive (its real exchange rate is undervalued), and that other Eurozone countries may have to experience a period of stagnation to correct this.
If this is true, an obvious question is how this happened. One simple story is that the formation of the Euro reduced real interest rates in a number of countries, which provided a large stimulus to demand, and also helped generate housing bubbles in some countries. A related story is the rapid expansion in cross border lending by Eurozone banks documented by Hyun Song Shin. However here I want to focus on another question: how could this have been prevented?
Standard macro has a simple answer: fiscal policy. The Eurozone outside Germany should have been running a much more contractionary fiscal policy in the years after its formation. If countries had done this, then a by-product would have been lower levels of debt when the global recession hit, which might have reduced the extent of the current debt crisis. But the main point is that it would have diminished the current undervaluation of Germany within the Eurozone, and so reduced the pain that countries outside Germany may now have to go through on that account.
The really interesting question for me is why Eurozone countries did not pursue more contractionary fiscal policies. The evidence that inflation outside Germany was significantly higher than German inflation was clear enough. Here is consumer price inflation in Ireland, Spain and Germany, for example. We can see in 2009 the process of correction beginning, but as my earlier post showed, the correction process for the Eurozone as a whole has only just begun. 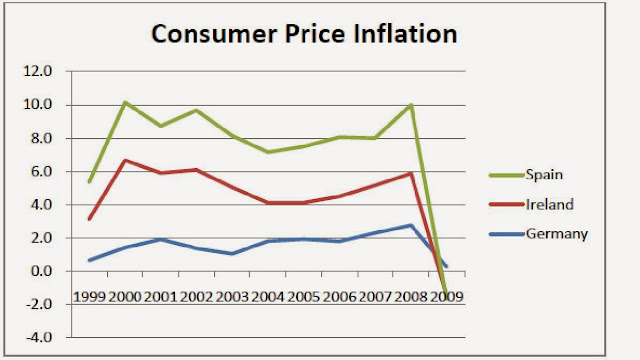 In one sense the answer to my question is obvious. Contractionary fiscal policy involves higher taxes or lower government spending, and governments do not like doing this. However two other factors may have made things worse in this case.
1) In the run-up to the formation of the Eurozone, critics of the whole project focused on the costs of losing an independent monetary policy. Studies showed that an active countercyclical fiscal policy could reduce this, but significant costs remained. (Some of my own work in this area is discussed on my webpage.) One response from those arguing the case for the Euro was to deny the problem. If you deny a problem, you do not prepare for it.
2) When the Euro was formed, the focus was on the problem of debt, rather than the problem of avoiding persistent differences in national inflation. This led to the Stability and Growth Pact, with its famous 3% deficit limit. As many have noted, debt to GDP ratios in Ireland and Spain were falling from 2000 to 2007, while debt to GDP in Germany was rising. So for governments in Ireland and Spain, there was no great pressure from outside to run a more contractionary policy. In these circumstances, what chance would economists have in persuading them otherwise?  (Some did try: for example Lane, P. (1998), ‘Irish fiscal policy under EMU’, Irish Banking Review, Winter.)
Why does all this matter? As everyone knows, the Eurozone is currently revamping how individual countries run their aggregate fiscal policy. With so much focus on the problem of debt rather than the problem of competitiveness, there is a danger of repeating the mistakes that were made when the Euro was formed, and ignoring the need for countercyclical fiscal policy.
One alternative is to in effect hardwire countercyclical fiscal policy by creating a fiscal union, where residents in countries that are growing too fast pay taxes to those growing too slowly. But as Kevin O’Rourke pointed out, proposals at the recent summit do not involve such a fiscal union, whatever they may be called in public. It is quite likely that such a union would be politically impossible at present. If that is the case, then using fiscal policy in a countercyclical way is essential if the Eurozone is to avoid recurring crises.
Posted by Mainly Macro at 13:09