Chris Dillow has a nice follow-up to my earlier blog on balanced budget fiscal expansion. I first read the Kalecki paper when I was at Cambridge, but for better or worse this is not part of the macro lectures I give at Oxford. We all miss Andrew Glyn a lot.
Is this what I had in mind when I said that if the government argued against all the possible balanced budget spending and tax measures that might stimulate the economy, we might suspect other motives? Before trying to answer that, I should say that part of my complaint was that such policy ideas are not part of the public debate, so we do not know what the government’s response would be. (We could infer, from the fact that none of these policies are being pursued, that they would be against them). I should also note that the FT suggests that the Liberal Democrats are thinking about tax switches, although I have my doubts about whether raising the £10K tax threshold would be particularly effective at stimulating demand.
When I drew parallels in an earlier post between the current UK situation and 1981, I mentioned by way of anecdote a little speech I made at the internal meeting of Treasury economists at the time. What I did not report was that at that meeting I made exactly the argument Kalecki puts forward. (Needless to say Kalecki was not normally quoted in discussions about budgets in the Treasury! - I was young, and probably knew I was going to leave fairly soon.) I think what Kalecki says made a good deal of sense in that particular context: as we were to find out, part of the Thatcher agenda was to take on the power of organised labour.
Whether it makes sense in the current context I’m less sure. Some of the factors identified by Chris in a later post could simply be attempts to deflect sympathy for the unemployed (which in turn would translate into criticism of the government) rather than the more strategic design he suggests. What I probably had more in mind on this occasion were two things.
The first involves the point about ideology which I have mentioned several times. If your ideological perspective is that ‘government is always the problem’ and that the private sector is best left alone, then blaming all our ills on the excesses of the previous government (rather than the financial system), and pursuing austerity by government as the means of correcting those ills fits well with that perspective. To use government intervention as a way of correcting a problem with the private sector (insufficient demand) does not.
The second is that nearly all the fiscal proposals I suggest involve redistributing money from the rich to the poor. This makes macroeconomic sense, because the poor are more likely to be credit constrained than the rich. It would also make sense from an equity point of view: the poor are suffering most as the result of austerity, as the chart below from the IFS illustrates. Unfortunately it does not make political sense for the current government. 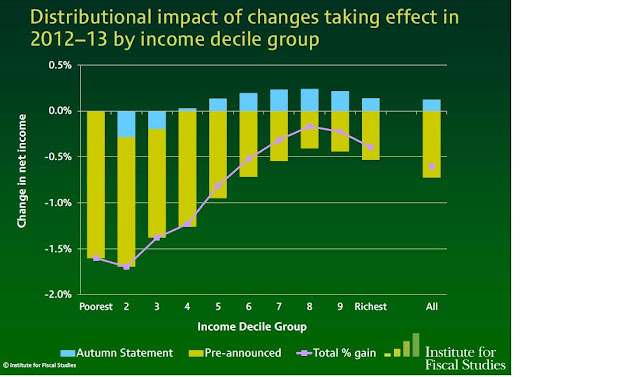 There is also a familiar but important point here about political influence and recognition. Issues to do with debt and financial markets are reported daily and major players in this area have almost guaranteed access to politicians – from whatever party. They tend to be rich, and will complain about being taxed at 50%. The young unemployed, who now make up nearly a quarter of the 16-24 age group, have by comparison very little political voice. Even when they are talked about when monthly figures are released, we are likely to get stories about motivation and how to brush up your CV, rather than recognition that with many times more people looking for a job than there are vacancies no amount of self help will make the problem go away. (See this by Zoe Williams.) These are the political reasons why the ‘counsels of despair’ that Jonathan Portes rightly complained about are able to endure.
Posted by Mainly Macro at 19:20