The language of the latest IMF report on the Eurozone could not be clearer.

“The euro area crisis has reached a new and critical stage. Despite major policy actions, financial markets in parts of the region remain under acute stress, raising questions about the viability of the monetary union itself. The adverse links between sovereigns, banks, and the real economy are stronger than ever. As a consequence, financial markets are increasingly fragmenting along national borders, demand is weakening, inflation pressures are subsiding, and unemployment is increasing. A further intensification of the crisis would have a substantial impact on neighboring European countries and the rest of the world.”

The Fund says that “A more determined and forceful collective response is needed.” The report contains many proposals for action. For example “the first priority is a banking union for the euro area”. But the proposals that I want to highlight are those for the ECB. They include a call for further interest rate reductions.

“Economic weakness and downside risks to inflation in the euro area warrant further reductions in the main policy rates. Although the room for such reductions is limited, they would deliver a strong signaling effect and, in addition, provide some direct near-term support to weaker banks by reducing indexed borrowing costs under existing LTROs.”

“The ECB could achieve further monetary easing through a transparent QE program encompassing sizable sovereign bond purchases, possibly preannounced over a given period of time. Buying a representative portfolio of long-term government bonds—e.g., defined equitably across the euro area by GDP weights—would also provide a measure of added stability to stressed sovereign markets. However, QE would likely also contribute to lower yields in already “low yield” countries, including Germany.”

At first sight this uniform application of bond purchases seems odd, but the report also suggests

“Additional and clearly communicated SMP purchases could ensure the transmission of monetary easing where sovereign bond markets are subject to increased stress.”

Until now such a policy has looked too much like fiscal dominance to the ECB: bailing out irresponsible governments. But as the IMF show clearly with this chart, such action can simply be justified as part of its monetary policy operations. 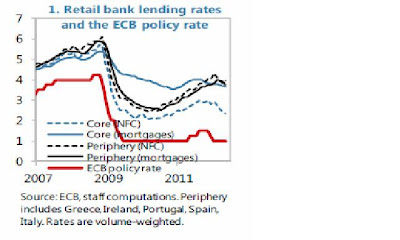 Not only are high interest rates on government debt in Greece, Ireland, Portugal, Spain and Italy producing fiscal austerity, but they are leading to a much tighter monetary policy in those countries. QE can be justified as a means of reversing this completely counterproductive (given the degree of fiscal austerity already implemented) monetary contraction. The idea that ECB bond purchases would induce problems of moral hazard in the periphery countries is absurd. These countries, as the IMF report points out, are already tightening their fiscal policy substantially: deficits are being cut much more rapidly than they should be from a macroeconomic point of view.

“The pace of fiscal adjustment is particularly accelerated in the hard-hit periphery countries: the projected consolidation over this and next year ranges from around 3½ percentage points or more of GDP in Portugal, Greece, Italy, and Spain, compared with ½ percentage point or less in Germany, Austria, and Finland”

In this context, to worry that QE type operations directed at periphery bond markets would induce moral hazard or indicate some kind of loss of ECB independence or fiscal dominance is ridiculous.