Republican voters and the BBC

From a European perspective, the US election should be no contest, as these results from an opinion survey by Pew indicate. 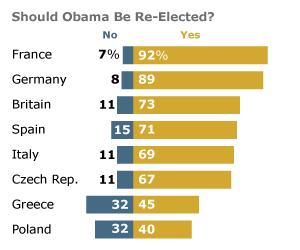 Now if you are a Republican, this may just confirm your view that Europeans are forced to live in just the kind of socialist state that Obama wants to turn the US into, and that we have been brainwashed into not knowing any better. However I think it has rather more to do with things like:

1) Many Republican Party supporters campaign to have intelligent design taught on an equal footing to Darwinian evolution in schools.

2) Climate change denial appears to govern Party policy on what may well be the greatest threat mankind currently faces.

3) Party leaders appear to at best tolerate, if not promulgate, the idea that tax cuts (particularly for the rich) will increase tax revenue, despite all the evidence to the contrary.

4) Veracity seems to be in short supply in Party speeches and propaganda in the current election.

In other words significant sections of the Republican Party seem to have a problem with reality, or as Paul Krugman says, facts have a liberal bias.

Of course the two major parties in the UK have their more extreme elements, but these are either much less extreme, or much more marginal, than in the Republican Party. Indeed, it is generally thought that when this ceased to be the case for the Labour Party in the 1980s, it did Labour great harm in terms of the popular vote. Labour leaders learnt that attacking these extreme elements within their own Party won them votes.

There appears to be another puzzle, and that is that many Republican voters seem to be voting against their own economic interest. Residents of red states tend to receive more government transfers than blue states. More generally, how can the poor possibly vote for a party which is so devoted to tax cuts for the (very) rich and reducing aid to the poor?

Now one possible answer to this puzzle is that facts, veracity and economic benefits are not at the top of many voters list of what they look for in politicians. It’s all about values. ‘Culture Wars’, traditionalists versus progressives, that kind of thing. Perhaps voters in Kansas just value individualism and religious belief more than European voters, and creationism, climate change denial and tax cuts convey these values.

I’m well outside my comfort zone here, but I want to suggest an alternative answer. In the decades around the 1970s, there was much discussion in the UK about the apparent enigma of the Conservative working class voter.  Previously it was argued that voting, and the two political parties in the UK, had been split along class lines – the Labour Party could be said to represent the working class. How then to explain that a growing number of the working class were apparently voting against their own party? In a paper written in 1967, the sociologist Frank Parkin turned that question on its head. The dominant culture, he suggested, was conservative with a small ‘c’. The relevant enigma was therefore not the working class Conservative, but the Labour voter of any class. The latter could be understood by considering the strength of working class networks (e.g. trade unions) that could resist the influence of the dominant conservative culture, and the changing strength of institutions promulgating that dominant culture. Of particular importance was the growing influence of radio and television as conveyors of information and values.

In the UK the state played a central role in the development of radio and television, through the BBC. It appears as if most European countries followed a similar model. Now this can have severe disadvantages if the state decides to take too much control, but in many European countries there are various safeguards designed to minimise the influence of the particular party in power over what is broadcast. I want to suggest that this set up has some important implications. State controlled media will tend to be centrist in its outlook, and dismissive of extremes. It will also try and reflect establishment views and opinions, which include academic scientific opinion and mainstream religious views. Partly as a result, a political party which appeared to tolerate the views listed above would be given a hard time. I’m also pretty sure that party leaders would not be able to get away with being as ‘economical with the truth’ as Ryan’s convention speech was.

In the US public sector broadcasting is not a major force. Now there is a chicken and egg problem here: perhaps the US media model may reflect different values, like a greater aversion to state power. However it could also just be a consequence of the political power of corporations in the US at a particular point in time. As Robert McChesney documents, it was not inevitable that the private sector model that now dominates in the US should have emerged, although once it was established it became easier to sustain this position.  My key point is that this lack of a major state presence in TV and radio makes it easier for those with money to try and control the information and social values promulgated by media.

In the UK we are used to newspaper barons manipulating news and opinion to further their own or a political party’s views on particular issues. However the BBC, together with a legal requirement on other TV channels to be politically balanced, limits the scope of newspapers to manipulate information or change values. Surveys repeatedly show much higher levels of trust in the BBC compared to the media in general. Undoubtedly the press does have considerable influence in the UK, but few would argue that it alone could fundamentally change the political landscape. However, if both TV and radio were able to work to the same model as newspapers, such manipulation becomes a distinct possibility.

Just as Frank Parkin argued that the working class Conservative voter was not an enigma in the UK once we thought about the dissemination of information and values, so the steady drift to the right of the Republican Party could be explained in similar terms. Paul Krugman argues that pundits who describe America as a fundamentally conservative country are wrong.  What I am suggesting is that the drift to the right of the Republican Party may be a function of the ownership structure of the media in the US. If true, this raises two questions. First, has this process in the US been there since the invention of radio and TV, or is it more recent, and if so why?  (Simon Johnson amongst others suggest it started with Reagan.) [Postscript 2: Mark Sadowski provides the answer which I should have known about below: the repeal of Fairness Doctrine.] Second, does the two party system in the US provide a limit to the power that money can have over the media, or does the trend have further to go?

Postscript 1:  To the extent that there is a section in the US media that likes to position itself as centrist, it often appears to deliberately avoid recognising what is going on: see here, for example (HT, as ever, MT)

Email ThisBlogThis!Share to TwitterShare to FacebookShare to Pinterest
Labels: media, Republican, US