The inflation dragon is just around the corner

People who believe this are not confined to the US. In articles in the Telegraph and the FT (HT Frances Coppola), Andrew Sentance says the job of the new Governor of the Bank of England should not involve messing with the inflation target, but to “reassure the British public that under his governorship they can expect stable prices”, which he thinks probably means putting up interest rates and withdrawing QE this year. The article contains the inevitable reference to the 1960/70s: “We have been here before in the UK. A creeping tolerance of higher inflation in the 1960s paved the way for double-digit inflation in the 1970s and early 1980s.”

I would not bother with this if it was not for two things. First, Andrew Sentance was on the Monetary Policy Committee, and his persistent warnings then and since that CPI inflation would be higher than expected have been largely right. Second, the factors that have been helping to keep CPI growth high – commodity prices and fiscal austerity – are not obviously about to disappear, so the Bank of England may still be having to explain why they are ‘ignoring’ above target inflation through 2013.

There is a genuine puzzle about why the influence of the recession has not dominated the impact of these commodity and fiscal effects. Paul Krugman stresses the role of wage rigidity. My own pet theory for the UK is the influence of the financial crisis, but that is for another post. What has to be laid to rest is the idea that we are about to experience the 1960/70s all over again. Have a look at this chart. 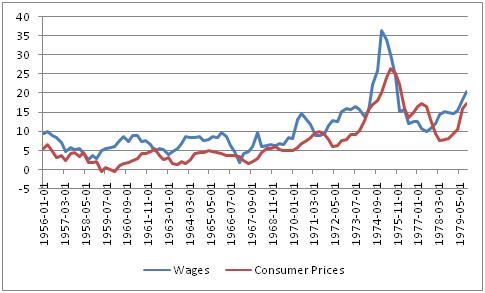 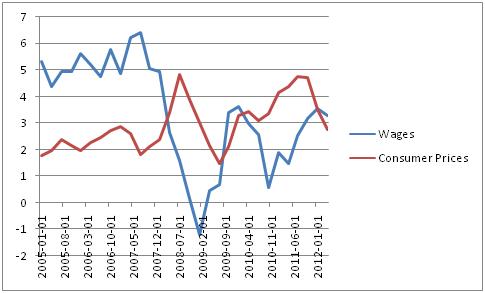 Since the recession hit, we have seen a marked reversal: consumer price inflation has been above wage inflation. There is absolutely no sign of an imminent wage price spiral. (The data for wage inflation I use here comes from the OECD, but if we use the ONS’s average earnings index the latest numbers for Aug-Oct 2012 show wage inflation of only 1.8%.) The only remotely similar period since 1955 was the early 1980s, when inflation was rapidly falling. (Whether the behaviour of real wages over the recent period is unusual given unemployment is examined here.)

I can put the same point another way. If the Bank of England had been given a target for wage inflation as well as its price inflation target, that target would probably have been 4%, reflecting the normal (pre recession) divergence between the two series. If it had only been given a 4% wage inflation target (and there is no clear reason why this should not have happened), then given the numbers above I assume Andrew Sentance  would be complaining that the Bank of England had been doing too little to stimulate the economy. This just shows the danger of having a mandated target for just one inflation measure that I talked about here.

I suggested in a post a month back that if the Chancellor really wanted to stimulate the economy, he should replace the Bank’s 2% CPI inflation target by a 4% average earnings target. He has the power to do that today, and does not need to wait until the new Governor takes over. But the broader point is that any suggestion that current tolerance of above target inflation is leading us back into the 1970s is about as realistic as a world with dragons.

[1] Compensation of employees, source OECD via FRED. It is a real shame that the ONS website is not as user friendly as FRED.
Posted by Mainly Macro at 14:28