Labour productivity in the recession: why are the UK and US so different?

I’m afraid this post is going to seem like an episode of House, except without finding out what the patient had at the end. Indeed it is not even clear which patient, the UK or the US, has the unusual symptoms.

Here are two charts, taken from a new study by the Institute for Fiscal Studies.[1] The first compares UK labour productivity in this recession and two earlier large UK recessions. 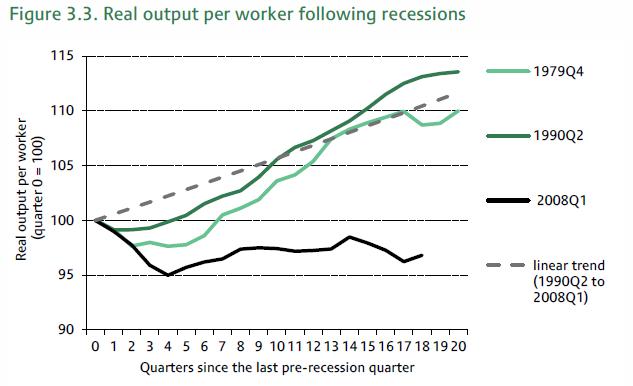 The second chart compares labour productivity growth in this recession across selected countries. 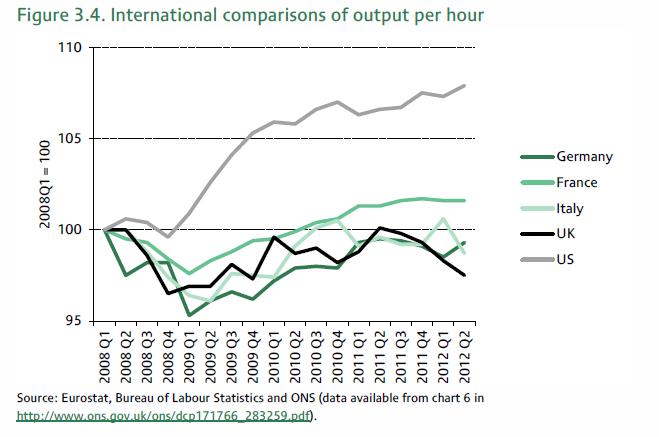 These are startling differences, so what can explain them? The IFS study, which builds on earlier analysis by the Bank, MPC member Ben Broadbent, and others [2], has some ideas about some things that may be going on and some things that are not, but I think its fair to say that we are still in the conjecture phase on this. So this post is mostly conjecture.

Let us start with the first chart. There are two classes of explanation for such a dramatic change. One is that the structure of the UK economy has radically changed. The other type of explanation is that the nature of the recession is different, and so the outcomes are also different. This recession has been generated by a financial crisis rather than by tight monetary policy. However, the fall in productivity growth in the UK is pretty widely spread across industries, so it is not a composition effect caused by a decline in the financial services sector. We need more clues.

One clue may be the unusual behaviour of UK real wages, which have fallen in this recession to a much greater extent than they did in earlier downturns. Unfortunately there is a chicken and egg problem here: does real wage growth reflect productivity growth (as it generally does in the long run), or does it have a causal role? It helps here to look at investment. Investment always falls in a recession, but UK investment has fallen by more in this compared to earlier recessions.

This leads to one possible story: factor substitution. Firms are replacing machines by workers, because real wages are low. Real wages are low because the UK labour market has become more flexible, and workers are cutting wages in response to unemployment by more than they used to. So this is a structural change story. If true, this could be good news. If the economy recovers and unemployment falls soon enough to avoid significant hysteresis effects, real wages will increase again, factor substitution will go into reverse, and labour productivity will make up lost ground.

I’m sure there is some of this going on. But it does not account for why the same thing has not been happening in the US, the archetypal flexible labour market. In addition, Ben Broadbent argues that a much larger fall in investment would be required to explain observed productivity this way.[3] There are also many other reasons why investment in this recession might be relatively low. The size of the downturn is greater, as is probably its expected duration (or at least the uncertainty associated with it’s duration). In addition, firms may just not be able to invest because banks will not lend them the money.

Here is another interesting clue. Large firms appear not to suffer from this problem: they have plenty of cash. There is some evidence that small firms, who are both more reliant in the UK on bank finance and are a more risky proposition, may have been subject to credit constraints. However we should not forget a third category of firms: start-ups.

One final clue. As has been noted by the IFS study and others, company liquidations in this recession have been lower than in previous recessions. (Tim Harford looks at this from a European angle.) In a recession where banks, as well as some firms, were in difficulties, banks may be reluctant to acknowledge failed loans and so may increase forbearance. Equally banks that are particularly concerned about their loan book are unlikely to take on new risk, so it may be much more difficult for new companies to get finance. (There is some support for this idea from the fact that the variance of rates of return and productivity have increased during the recession, but I have not seen evidence on whether this is unusual for a typical recession.) This is a story told about Japan’s lost decade. [4]

So, to the extent that UK banks have become much more cautious, they have stopped providing finance for new (potentially innovative) firms, but are keeping low productivity firms in business. A similar process may be going on within larger companies, where getting finance is not a problem. Innovation often requires investment, and so a reduction in investment generated by uncertainty (and perhaps greater risk aversion) will slow down productivity growth. (The structural econometric model of the UK economy that I built twenty years ago, COMPACT, has a vintage production structure, so I have a fondness for this idea.)

This story puts the unusual nature of the recession - a financial crisis and an associated reduction in risk taking - at the centre of the explanation of the UK productivity puzzle. There is also a nice corollary, which I have not seen emphasised elsewhere. To the extent that new entry has become less likely because of a lack of finance, the extent of competition has decreased. (Markets have become less ‘contestable’.) This will allow existing firms to increase profit margins, which may also help explain why UK inflation has been surprisingly persistent in this recession. So the story helps explain two UK puzzles rather than just one.[5]

Yet this is a story that explains one of the charts - unusual behaviour in UK productivity - but not why none of this is visible in the US. Indeed, given that many European countries have similar profiles to the UK (except just not so bad), and given the econometric evidence noted below, the puzzle here may actually be the US. There are many people who know much more than me on these issues, but at the moment I cannot see any obvious reason why the US should be different.

The US banking industry appears much less concentrated than in the UK: there are many more US banks than UK banks even after allowing for the different size of each economy. I have seen it suggested that larger banks may find it more difficult to use local knowledge about particular markets or industries, local knowledge which could help offset the impact of higher risk aversion on innovation. Perhaps US start-ups have access to a greater range of sources of finance than those in the UK, but there seems to be the same concern in the US about small business lending as there is in the UK.

So I do not think we even have a potential answer to the puzzle posed by both charts, although I should also note an ever present danger in macro of trying to explain too much with too little data (to overfit). A recent very good study that tries to maximise the data by looking at financial crises the world over has just been published by Nicholas Oulton and María Sebastiá-Barriel. They find that financial crises not only tend to lower productivity by more than other types of recession in the short run, but also that there is a permanent productivity effect from financial crises. However they also find that this long run effect is not robust - it comes from the inclusion of developing countries in the data set, particularly Latin American countries. Which suggests that nothing is inevitable, and being fatalistic about potential output that we can never get back may be a big mistake.

[1] The productivity puzzles, Richard Disney, Wenchao Jin and Helen Miller, IFS
[2] Bruegel has some useful links here. This includes some who still believe a lot of labour hoarding is going on, and I would not want to discount that possibility.
[3] In other words we are seeing very low UK TFP growth as well as low labour productivity growth
[4] For example Caballero, R. J., Hoshi T and Kashyap A. (2007) “Zombie Lending and Depressed Restructuring in Japan”, American Economic Review 98.
[5] In fact an increase in monopoly power in the UK following the recession would produce on its own higher inflation, lower real wages and lower labour productivity (via factor substitution). However it would also imply a falling labour share, which as Chris Dillow points out does not appear to have happened. So you need to add some additional productivity story as well.