Myths and Realities of the 1970s

I have been pondering why inflation targeting is so popular, as opposed to the more natural idea of a dual mandate. I say more natural for two reasons. First, because the dual mandate corresponds to the two roles of monetary policy: short run demand management and determining medium/long term inflation. Second, because it maps naturally to the objectives that macroeconomists typically assume or derive when modelling monetary policy: minimising both excess inflation and the output gap.


I think a big reason for the popularity of inflation targeting is the 1970s. A common story for why inflation was allowed to rise so high for so long in that decade is that monetary policy was targeting the output gap, and policy makers got their estimate of the natural rate very wrong. (A classic reference is Orphanides (2002). [1]) A dual mandate, it is suggested, encouraged that mistake, and could lead to the same mistake being made again. So central banks given independence since the 1970s tend to have low inflation or price stability as their primary goal, rather than a dual mandate.

There is an obvious rejoinder to that argument. The US Fed maintains its dual mandate, yet it shows no signs of acquiescing to the kind of increases in inflation we saw in the 1970s. Its latest forward guidance says it will tolerate inflation up to 2.5% (as long as unemployment stays high) before it considers raising interest rates. That is hardly going back to the 1970s. There are people who think that QE will, any moment now, open the inflation floodgates, but I want to keep to serious macro in this post.

So current experience shows there is no reason why a dual mandate should inevitably lead to rising inflation. I think there were three important contributory factors to what happened in the 1970s that are just not present today. First, our knowledge of inflation output trade-offs, although hardly complete now, was much weaker back then. Second, the Fed and other monetary policy makers did not have clear inflation targets that they were publicly committed to. Third, there appeared to be an alternative instrument for dealing with inflation: direct controls on prices and wages. [Postscript: see comment from Robert Waldmann and my reply below.] The 1970s really was a different world in terms of the understanding of macroeconomic policy.

I’m reminded of all this by a fascinating chapter (released today) in the forthcoming IMF World Economic Outlook. The main focus of the chapter is on how the Phillips curve has shifted over time. There are two clear findings. The first is that the sensitivity of inflation to the output gap is much lower now than in the 1970s. Second, the importance of expectations about future inflation (compared to past inflation) is much greater. An obvious way of interpreting both results is that inflation expectations are now much more firmly anchored.

However the chapter also contains an interesting comparison between the behaviour of 1970s inflation and monetary policy in the United States and Germany. We all know that the US had to wait until Volcker in 1979 before inflation control was restored. However the Bundesbank did this much earlier: inflation was brought down to below 3% in 1978. While it could hardly be immune from the impact of the oil price shocks and high inflation elsewhere, its record in keeping inflation anchored looks much better than other countries. Here is the relevant chart from the chapter. 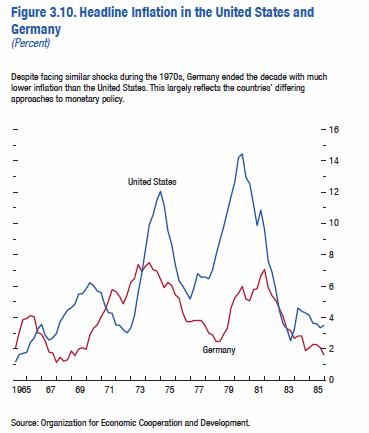 Now there is a popular story about this as well, which is that the Bundesbank was practicing monetary targeting during this period. But, as the WEO chapter points out, this is also a bit of a myth. Studies suggest [2] that in practice the Bundesbank was not a rigid money supply targeter in the way both the US and UK attempted to be in the early 1980s, but instead adopted a more flexible approach which can be characterised by some form of Taylor rule. Furthermore the output gap played an important role in that rule, and the Bundesbank also got its estimates of the output gap wrong.


To quote from the WEO chapter:

“the Bundesbank’s success was not linked to meticulously meeting the monetary targets, which it actually missed throughout the 1970s, or to focusing on inflation with no regard for output developments. Rather the Bundesbank’s success was a reflection of the robust framework it developed, which allowed it to keep longer-term inflation expectations anchored while flexibly responding to shorter-term output shocks.”

I think you can argue that what monetary targets did was proxy a dual mandate. Inflation would not be allowed to rise unchecked for too long, but equally movements in output would be offset by interest rate changes, in the classic IS-LM manner.

So I think the lesson of the 1970s is that it is important to have publicly stated inflation targets, but not that the short term output stabilisation role should be subordinate to hitting those targets. In the future there will surely be a similar IMF WEO chapter looking back at the divergent behaviour of US and Eurozone output in the 2010s (see Ryan Avent here). I’m sure one of its arguments will be that the US did so much better in part because monetary policy had a dual mandate, while the ECB acted as if all that mattered was inflation.

[2] The WEO chapter notes Clarida, R.H. and Gertler, M. (1997) “How the Bundesbank Conducts Monetary Policy” in Reducing Inflation: Motivation and Strategy eds Romer and Romer, Chicago University Press, pp 363-412 and Gerberding, C., Seitz, F. and Worms, A. (2005) “How the Bundesbank Really Conducted Monetary Policy” North American Journal of Economics and Finance, 16, 277-92. The second study reconstructs the real time data set that would have actually been available to policy makers, and finds as a result that it is the change rather than the level of the output gap that was important in their Taylor rule, and that a term in excess money growth is also significant. This slightly earlier paper by Clausen and Meier does something similar, but with results closer to a traditional Taylor rule.