As the Bank of England finally publishes [1] its new core model COMPASS, I have been thinking more about what the central bank’s core model should look like. (This post from Noah Smith I think reacts indirectly to the same event.) Here I will not talk in terms of the specification of individual equations, but the methodology on which the model is based.

In 2003, Adrian Pagan produced a report on modelling and forecasting at the Bank of England. It included the following diagram. 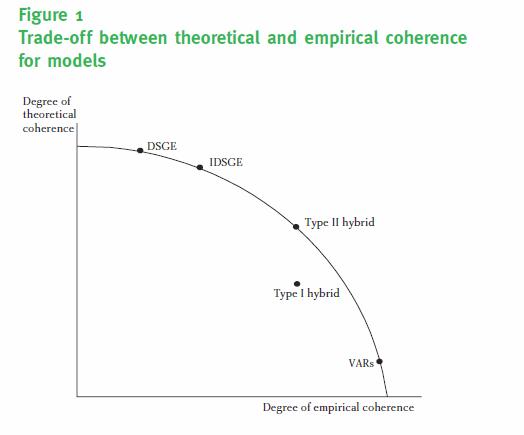 One interpretation is that the Bank has a fixed amount of resources available, and so this curve is a production possibility frontier. Although Pagan did not do so, we could also think of policymakers as having conventional preferences over these two goods: some balance between on the one hand knowing a forecast or policy is based on historical evidence and on the other that it makes sense in terms of how we think people behave.

I think there are two groups of macroeconomists who will feel that this diagram is nonsense. The first I might call idealists. They will argue that in any normal science data and theory go together – there is no trade-off. The second group, which is I will call purists, will recognise two points on this curve (DSGE and VARs), but deny that there is anything in between. I suspect most macroeconomists under 40 will fall into this group.

The purists cannot deny that it is possible to construct hybrid models that are an eclectic mix of some more informal theory and rather more estimation that DSGE models involve, but they will deny that they make any sense as models. They will argue that a model is either theoretically coherent or it is not – we cannot have degrees of theoretical coherence. In terms of theory, there are either DSGE models, or (almost certainly) incorrect models.

At the time Pagan wrote his report, the Bank had a hybrid model of sorts, but it was in the process of constructing BEQM, which was a combination of a DSGE core and a much more data based periphery. (I had a small role in the construction of both BEQM and its predecessor: I describe the structure of BEQM here.) It has now moved to COMPASS, which is a much more straightforward DSGE construct. However judgements can be imposed on COMPASS, reflecting a vast range of other information in the Bank’s suite of models, as well as inputs from more informal reasoning.

The existence of a suite of models that can help fashion judgements imposed on COMPASS may guard against large errors, but the type of model used as the core means of producing forecasts and policy advice remains significant. Unlike the idealists I recognise that there is a choice between data and theory coherence in social science, and unlike the purists I believe hybrid models are a valid alternative to DSGE models and VARs. So I think there is an optimum point on this frontier, and my guess is that DSGE models are not it. The basic reason I believe this reflects the need policymakers have to adjust reasonably quickly to new data and ideas, and I have argued this case in a previous post.

Yet I suspect it will take a long time before central banks recognise this, because most macroeconomists are taught that such hybrid models are simply wrong. If you are one of those economists, probably the best way I can persuade you that this position is misguided is to read this paper from Chris Carroll. [2] It discusses Friedman’s account of the permanent income hypothesis (PIH). For many years graduate students have been taught that while PIH was a precursor to the intertemporal model that forms the basis of modern macro, Freidman’s suggestion that the marginal propensity to consume out of transitory income might be around a third, and that permanent income was more dependent on near future expectations than simple discounting would suggest, were unfortunate reflections of the fact that he didn’t do the optimisation problem formally.

Instead, Carroll suggests that the PIH may be reasonable approximation to how an optimising consumer might behave as they anticipate the inevitable credit constraints that come with old age. There is also a lot of empirical evidence that consumers do indeed quickly consume something like a third of unexpected temporary income shocks. In other words Friedman’s mix of theoretical ideas and empirical evidence would have done rather better at forecasting consumption than anything microfounded that has supplanted it. If that can be true for consumption, it could be true for every other macroeconomic relationship, and therefore a complete macromodel.

[1] A short rant about the attitude of the Bank of England to the outside world. COMPASS has been used for almost two years, yet it has only just been published. I have complained about this before, so let me just say this. To some senior officials at the Bank, this kind of lag makes perfect sense: let’s make sure the model is fit for purpose before exposing it to outside scrutiny. Although this may be optimal in terms of avoiding Bank embarrassment and hassle, it is obviously not optimal in terms of social welfare. The more people who look at the model, the sooner any problems may be uncovered.  I am now rather in favour of delegation in macroeconomics, but delegation must be accompanied by the maximum possible openness and accountability.

[2] This recently published interview covers some related themes, and is also well worth reading (HT Tim Taylor).
Posted by Mainly Macro at 15:21