The relationship between money and macroeconomics is very strange. At one time money was thought to be central to the discipline - advanced courses in macroeconomics were often called monetary economics. We had monetarism. Then gradually money slowly faded away. We had real business cycle models that were just real, and if we wanted to make them nominal you just added money as a ‘medium of exchange’. Then even Keynesian models with sticky prices began to dispense with money altogether, becoming cashless. Money seemed both essential - for example to the concept of inflation and to why Says Law did not hold - but also dispensable.

These thoughts followed from reading a book called ‘Money: The Unauthorised Biography’ by Felix Martin. 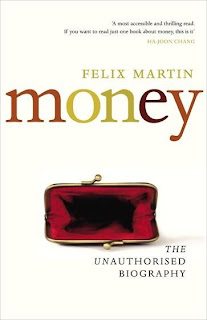 The first thing to say is that this book is a great read, and one that I think non-economists will find completely accessible. Much of the book, as you would expect from the title, involves a historical discussion of how money evolved, was developed and was understood in particular societies at different times. Some of this I was familiar with - like the stones of Yap - but a great deal was new to me. But this is a biography with a message. Money is not fundamentally a commodity medium of exchange that made exchange more efficient compared to barter, but a particular form of credit, a system of clearing accounts (transferable credit). Yet, Martin argues, the dominant view since Adam Smith has been of money as a commodity medium of exchange, and this has enabled macroeconomics to largely ignore financial crises, until they actually happen. Here is a passage:

“From the moneyless economics of the classical school there evolved modern, orthodox macroeconomics: the science of monetary society taught in universities and deployed in central banks. From the practitioners’ economics of Bagehot, meanwhile, there evolved the academic discipline of finance - the tools of the trade taught in business schools, used by bankers and bond traders. One was an intellectual framework for understanding the economy without money, banks and finance. The other was a framework for understanding money, banks, and finance, without the rest of the economy. The result of this intellectual apartheid was that when in 2008 a crisis in the financial sector caused the biggest macroeconomic crash in history, and when the economy failed to recover afterwards because the banking sector was broken, neither modern macroeconomics nor modern finance could make head or tail of it.”

Some of this will be familiar, although what was new for me (but perhaps not to followers of Minsky or MMT) - and quite challenging - was the idea that this could all be traced back historically to a misconceived view of money itself. (According to Martin, the 17th century philosopher John Locke has a lot to answer for.) The threads developed from the historical account of the origins of money are numerous. For example money as credit is inevitably social, and so its value is bound to be politically determined. In a financial crisis, when the size of debts begin to encumber the economy, it is therefore quite logical and natural to adjust the value of money to redistribute between creditors and debtors.

So this is a big ideas, big picture kind of book. Inevitably, therefore, some of the brushstrokes may be a little too broad or bold for some. The story of macroeconomics as essentially classical and real with only a brief incursion by Keynes is I think too simple and easy, and I would have liked to know his take on the explosion of macro work on financial frictions since the crisis. But the historical detail is fascinating, and the ideas they are used to illustrate are clear and thought provoking, so I’m very glad I read it.