This is off the usual macro beat, so probably this point has been made in a much clearer way by others, but it is hardly ever made in the public debate, and I have read economists who argue the opposite. It was prompted by the UK government’s predictable decision to kick ‘plain packaging’ of cigarettes (example below) into the long grass. One of the arguments used against plain packaging is that it represents yet more paternalism by the government. My general thought is this: is banning advertising paternalistic, or is it enhancing our freedom?

A simple definition of paternalism is an action, by a person, organisation or the state, which limits the liberty or autonomy of other people for their own good. So we have individual freedom, interference, and crucially motivation. Advertising is usually portrayed as just providing information so that consumers can make informed choices. Sometimes it may do that. But advertising is often about suggesting associations, which provide no information at all. It is a mild form of brainwashing. Most of the time it is simply annoying.

For some, the information provided by some advertising might be useful. For most it is not. We can try and avoid advertising if we do not want its ‘information’, by turning the page, recording the programme and fast-forwarding through the adverts, averting our eyes, but this requires effort. Why should I have to make that effort? So for most people most of the time, it is advertising that mildly interferes with our freedom. (If I wanted to be clever, I could say that companies who advertise believe their product makes consumers better off, and therefore it is advertising that is paternalistic. However companies advertise to increase profits, not to increase consumer utility.)

So a government that prevents advertising can be seen as allowing individuals to make their own unencumbered choices. It is giving us a little more freedom and autonomy, rather than limiting it. The argument for advertising has to be that the benefits to the few in getting useful information outweighs the costs to the many in either avoiding it, or getting information they do not want. It is not paternalistic to ban advertising, just as it is not paternalistic to stop people being stalked.

That is the general point which hardly ever seems to be made. It applies, for example, to banning food advertising aimed at children, where the nuisance element of the advertising has to outweigh its information provision. However the debate about ‘plain packaging’ is not about either packaging that is plain, or the pros and cons of advertising. The Australian version of plain packaging replaces the logo of the cigarette with a picture of one of the health risks if you smoke these cigarettes (see below). So it is not about banning advertising, but replacing one type of advertising with another. 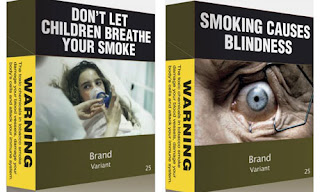 Those who do not smoke and have no intention of smoking are not forced to look at these adverts, so banning this kind of advertising would not increase their freedom. For those who do not smoke but might smoke, and probably for those who do smoke, the information content of the ‘plain packages’ is clearly much greater than packages that were dominated by a logo. So this is one example where the information content of advertising does dominate any reduction in freedom that the advertising entails.

One final point about information. Mark Littlewood, Director General at the Institute of Economic Affairs, says on their website that following the government’s decision:  “Hopefully this will mark a turning point against the excessive elements of the health lobby whose desire to interfere knows no bounds.” Yes, of course, that strange desire to restrict what companies that sell products that kill people are allowed to do. In the Notes to Editors on that website, it says that “The IEA is a registered educational charity and independent of all political parties.” Now I wonder whether the IEA is funded by the tobacco companies that have lobbied hard against plain packaging? That would be useful information, so why does the IEA not provide it, or even advertise it?
Posted by Mainly Macro at 14:48