Are the UK floods Cameron’s Katrina? 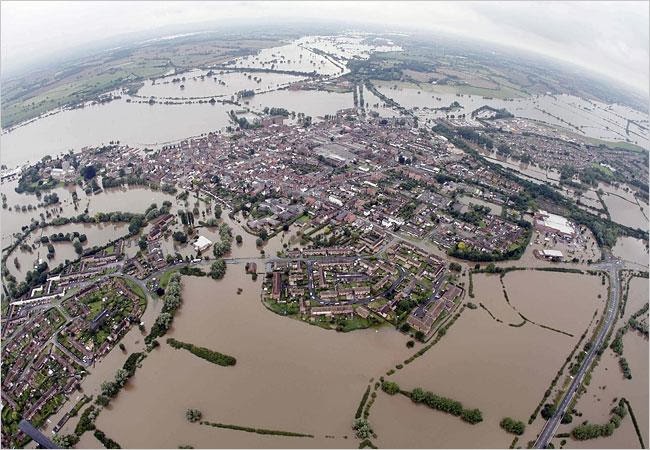 There are three reasons why the government should be very worried about the political fallout from the unprecedented level of UK flooding.

1) When they came into office, they cut back substantially on funding flood prevention, when there was a clear need to increase spending. That is a simple fact, which no amount of playing with averages can avoid. The Guardian reported in June 2012 that “300 flood defence schemes across England have been left unbuilt due to government budget cuts.” (HT teekblog)

2) The reason why there was a need to increase spending on flood prevention was climate change. This was well understood by the relevant government agencies and departments, so it is no surprise that the Met Office should confirm the link. Yet the government is vulnerable on this because so many of its MPs are active or closet climate sceptics, including the minister in charge of the relevant department.

3) The government’s philosophy towards the public sector is to roll back or privatise. No doubt there are some areas where this makes sense, but in others it is undoubtedly causing distress and hardship. Yet those affected typically have little political voice, and so are not too visible. In addition, many in the government have encouraged the idea that recipients of the welfare state are either undeserving, or victims of a dependency culture. In contrast, flood victims are very visible, and a strategy of blaming the victims will not work politically.

So far the government’s attempts to avoid criticism have been remarkably successful. The strategy was clear - target the environment agency. Not those working on the ground, who were obviously working their socks off, but senior management at the agency, and in particular its chairman Chris Smith. The story was that the agency had been giving the government the wrong advice.

That strategy has been remarkably successful largely because the BBC has played along exactly as planned. At first it appeared, as Simon Jenkins says, to allow “the Somerset branch of the NFU to write its newscasts.” When it comes to the cuts, it is either ‘views on shape of the earth differ’ stuff, or just not talked about. Driving home today I listened to Radio 4’s 5pm news program which led with 20 minutes on the political ramifications of the floods, and the government’s spending cuts were not mentioned once! However as the rain keeps coming and the floods spread, that diversionary strategy will lose its power as the facts become more widely known. The Financial Times reports today that “The Environment Agency has had to endure “massive” cuts to its budget since the Cameron government came to power despite warning this would affect its ability to defend the country against flooding, the agency’s chairman said on Monday.” A month ago the Daily Telegraph reported “Officials working on flood risk management will be sacked as Environment Agency sheds about 15 per cent of its workforce to save money, potentially placing ability to cope with floods at risk”. Cuts on this scale are difficult to pass off as ‘efficiency savings’ when villages and regions are isolated by the floods.

As Alex Andreou notes, preventing flood damage and responding to emergencies “requires a well co-ordinated, firm, top-down response, and the spending of tax revenue to alleviate misery, on the strict basis of need rather than worthiness. At the same time, every ideological fibre in a neoliberal's soul must rebel.” Yet, as Rick points out, much of the danger from flooding comes from overwhelmed drains and sewers, and these are the responsibility of private water companies. These monopolies have received their fair share of criticism for not doing enough as they continue to make large profits.

Cuts in flood prevention are a small part of austerity, but there are close parallels with the macroeconomic case. Just as ministers might have hoped that benign weather would not reveal the folly of cutting back on flood prevention, they also hoped that the economic recovery that began in 2010 would continue, and not be derailed by events like the Euro crisis. In both cases they were not lucky. Just as some in government never believed in all this climate change stuff, others thought that this Keynesian idea that austerity might be a bad idea at the zero lower bound was fanciful. (Some, like George Osborne, appear to have thought both.) When these mistakes became evident it was, with the floods, the Environment Agency’s fault, and also the last government, while with the recession it was all down to those Goddamn Europeans, and of course the last government. Yet whereas the links between austerity and prolonged recessions may appear mysterious to many, the links between lack of flood prevention and flooding are all too obvious. And the real danger for the government is that perhaps others may begin to see these parallels.
Posted by Mainly Macro at 17:15