When it comes to the issue of when interest rates should start rising, one of the points I and others have often made is that the risks are not symmetric. If inflation starts rising faster than we expect monetary policy can quickly respond. Alternatively if we actually have more ‘spare capacity’ than we currently believe, it may take some time for this to become apparent (inflation is more sticky when it gets low), and the zero lower bound limits what monetary policy can do.

In this light, the following table from the Bank of England’s inflation report issued today is rather interesting. 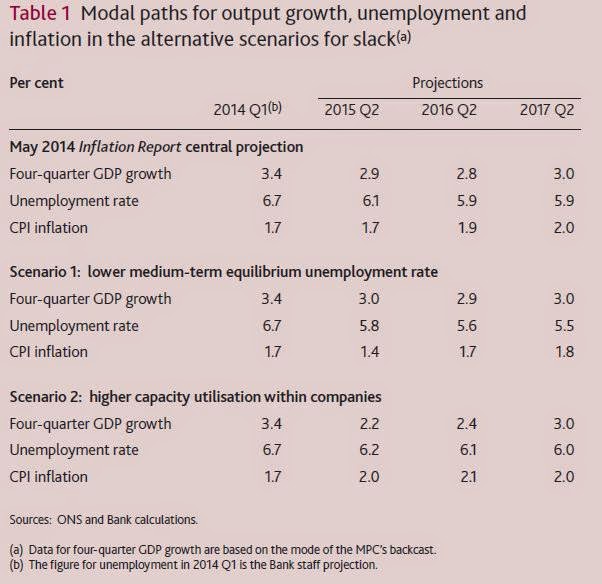 Now as a macroeconomist I really want to know more. These are different shocks, so they are not a pure test of asymmetry. The path of interest rates is not shown, so we do not know how much of a constraint the zero lower bound is (if at all) in scenario 1. In scenario 1 unemployment falls quite a lot more than in the central projection, but the additional GDP growth seems small by comparison. The opposite is true in scenario 2. This is undoubtedly a result of different shocks being applied, but all the report tells us is that judgement was used in deciding how to shock the model to best capture each scenario. As I am sure Tony Yates would say, it would be nice for those who are interested in this detail to know a bit more.

However, putting all these qualifications aside, these simulations are welcome given all the discussion underway. They suggest that the upside risks to inflation are small, because monetary policy is capable of responding quickly. Overestimating the degree of current slack does not lead to inflation ‘taking off’. Perhaps this helps to explain why the Bank appears to some to be rather relaxed about the need to raise rates.
Posted by Mainly Macro at 19:37