As Tony Yates among others has observed, antagonism towards using fiscal policy for macroeconomic stabilisation seems to be an essential part of market monetarism. However their argument is not that fiscal policy will have no impact on demand and therefore output, but rather that monetary policy can always offset this impact. This can be called the ‘monetary offset’ argument.

If empirical evidence could be found that complete monetary offset has operated during a liquidity trap that would be powerful support for the market monetarist case. Scott Sumner recently presented (HT Nick Rowe) some analysis by Mark Sadowski which he said did just that. Taking the cyclically adjusted primary balance as a measure of fiscal policy, it showed that there was no correlation between this and growth in nominal GDP in the single period from 2009 to 2014 for those countries with an independent monetary policy.

There are tons of problems with simple correlations of this kind, some of which I discuss here, which is why quite elaborate econometric techniques are nowadays used to assess the impact of fiscal policy. But there is a rather simpler problem with this correlation. As far as I know, no one had expressed a concern about fiscal austerity because of the impact this will have on nominal GDP. The issue is always the impact on real activity, for reasons that are obvious enough.

So what happens if we relate fiscal policy to real GDP growth, using Sadowski’s data set? Here is the answer. 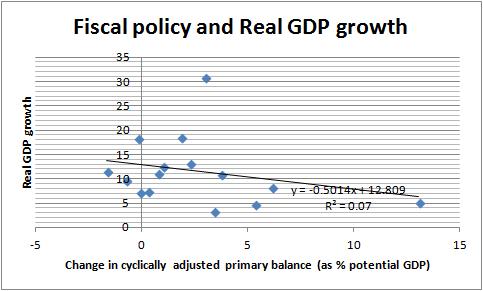 There are two obvious outliers here: at the top Singapore, and to the right Iceland. Exclude those and we get this. 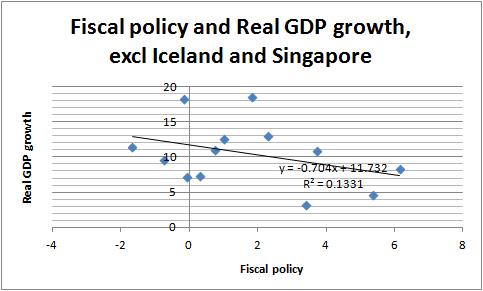 There is a clear negative correlation between the extent of fiscal tightening and the amount of real GDP growth. Strange that Sumner gave no hint of this :)

Do I think this is definitive evidence? No, for two reasons. First, the obvious problems with simple correlations of this kind noted earlier. Second, this sample includes quite a few countries where interest rates over this period have averaged over 2% (Australia, Norway, New Zealand, and Korea) and so are unlikely to be subject to a liquidity trap. Others may only have been in a liquidity trap for a part of this period. What we can say is that these correlations are perfectly consistent with the view that austerity reduces growth in countries with an independent monetary policy. [2]

If you were to conclude that we just do not have enough data to know to what extent monetary offset can operate in a liquidity trap, I think you would be right. If you then went on to say that therefore the data cannot discriminate between the two sides in terms of policy, you would be wrong. What market monetarists want you to believe is that there is no need to worry about fiscal austerity in a liquidity trap, because an independent monetary policy can and will always offset its impact. This is wrong, precisely because the empirical evidence is so limited. We know, both from theory and the great majority of econometric studies, that fiscal contraction has a fairly predictable impact in reducing GDP. We have virtually no idea how much unconventional monetary policy is required to offset this impact. Given lags, that means trying to achieve monetary offset in a liquidity trap is always going to be hit and miss. The moment you think about uncertainty, the market monetarist argument for not worrying about austerity in a liquidity trap falls apart.

[1] It is not the only reason why fiscal austerity in a severe recession might be a bad idea. There is a lot of empirical evidence that the impact of austerity is greater in recessions than when the economy is stronger, and there are other theoretical reasons besides monetary offset why that may be the case. This is of some importance for individual economies in a monetary union.

[2] If the coefficient on fiscal policy was lower for this sample than for Eurozone countries (I’ve not tried), would that at least be evidence for some monetary policy offset? The trouble here is that some of the countries driving the EZ results were also suffering from an overvalued real exchange rate as a result of earlier excess demand, and so this might bias upwards the coefficient on fiscal policy in those regressions.