The EU referendum and the media

The government is to send a 14 page leaflet to every household setting out the ‘facts’ that make a vote to stay in the EU the sensible thing to do. Anything wrong or undemocratic about that? US readers might be rather surprised to learn the official In and Out groups are only allowed to spend up to £7m each on campaigning: we in the UK have this rather quaint and intensely democratic idea that money should not be able to buy elections. But the government’s leaflet, which will cost nearly £10 million to produce and distribute, does not count as part of that. [1]

For that reason alone, this leaflet is both unfair and undemocratic. But most of the complaints about this seem to have come from those supporting the Leave campaign. Is this because others who might normally be expected to speak up for fairness and democracy are staying quiet because they support staying in the EU? I honestly do not know, for reasons that will become clear.

What I think is pretty clear is that a large majority of what you might call the establishment, and also a majority of what was once called ‘the chattering classes’, plus a majority of academics (e.g.), are in favour of staying in the EU. One of those is Timothy Garton Ash, who wrote an article in the Guardian recently about BBC coverage. He complains that because the BBC is focused on being fair to both sides, it is failing to be informative. I couldn’t help thinking to myself as I read this (very fair and sensible) article, welcome to the world that many scientists (including social scientists) have had to live with for quite some time. Here is the BBC’s mission, which I was discussing recently in a talk on a different topic. 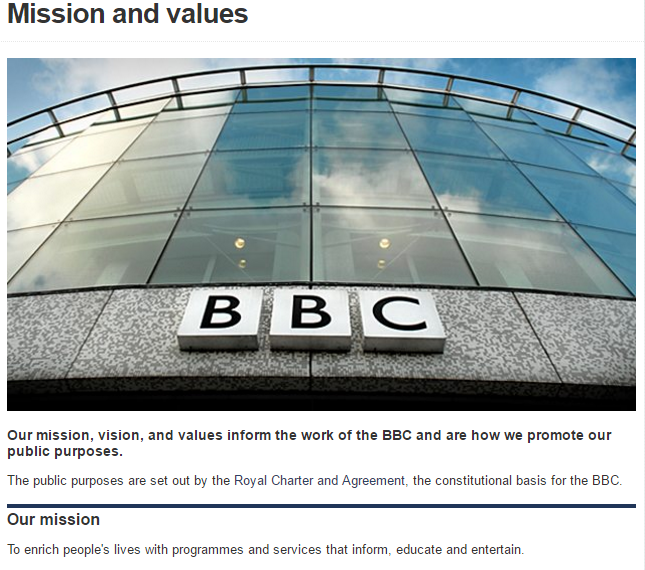 As we are seeing in this EU referendum, setting up everything as a two sided debate does little to inform anyone. It can even be counterproductive, setting the climate change scientist (full of natural scientific caution) against the climate change denier (chosen for their rhetorical ability). It is a format that militates against evidence: you cannot normally show a chart in a debate, and so instead we get the presentation of summary statistics that are selected on the basis of how best they support a view rather than how best they summarise the data. (UK spending on flood prevention is a clear example of how that happens.) It is a format where even numbers lose their meaning, and where dots are hardly ever connected. [3]

It is not hard to see how that happens, particularly when media organisations are fighting for their survival. Some things can be done, as long as they are seen to be non-political. For example journalists can use statistics in a way that informs rather than confuses. For example less status should be given to journalists who have good political contacts, and greater status given to those who know their subject and can quickly source experts. Above all else, we have to do all we can to resist government attacks on the public media.

But these changes will not make a major difference. I suspect that the BBC, for example, will only start to fulfil its mission to inform and educate when it is safe for it to do so. In the meantime we will have to put up with the uniform ‘views on the shape of the earth differ’ style of reporting. The government’s leaflet on the EU may be one consequence. Our membership of the EU may become another.


[1] That the government has resorted to trying to rig the vote in such a blatant way is interesting on many levels. (If you think this language is too strong, how would you react to the government doing the same before a general election?) I suspect the government was unprepared for the impact of being on the wrong side of most of the print media. In many other respects, it reflects chickens coming to roost. (One I did not mention here is voting ‘reform’ which tends to exclude the young who tend not to vote Conservative, but who also tend to favour the EU.) But the move may also reflect continuing hubris. Is it wise to associate the Remain side so clearly with a government which is right now losing popularity? It would have been so much better to do a 2003 Euro entry type exercise. The government must have known it would come out in its favour, so why was this not done?

[2] Just in case anyone does not get the reference, more detail here. I’m not sure whether this example represents ignorance, or journalists talking to the wrong people (i.e. some City economists), or not presenting the facts because this would be seen as ‘being political’. Probably a mixture of all three.

[3] For example, compare how much information you get from this 2 minutes (from the excellent John Van Reenen) to ten times that amount of normal reporting.