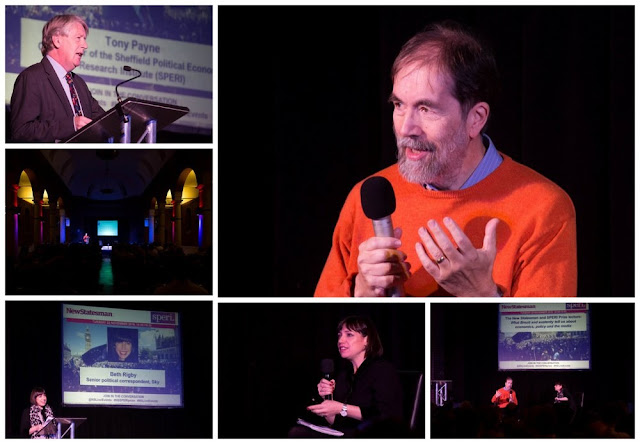 Got back from a trip to London to give my lecture (pics above: thanks to everyone at SPERI and New Statesman, plus Beth Rigby for chairing and everyone else for coming) looking forward to not thinking about economics for the rest of the day, only to find the Chancellor had given an Autumn Statement. Luckily the whole thing appears to be a damp squib compared to the expectations raised beforehand, so here are just a few points. On helping the so-called just about managing, see the ever excellent Ben Chu.

Remember all the talk beforehand about substantial increases in public investment? What we got is increases of 0.3% or 0.4% of GDP in each of the financial years from 2017 to 2020. These increases give us figures that are slightly above the numbers we saw from the Labour government in the years immediately before the financial crisis. We should be spending much, much more when interest rates are so low.

There was also much speculation that we might return to more sensible fiscal rules, now that Osborne’s had been busted. Instead the new Charter for Budget Responsibility is honestly not worth the paper it is written on. We have a target for the total cyclically adjusted deficit (including investment) for a fixed year. Whatever the number involved, this makes two mistakes: having a fixed rather than rolling date, and by including public investment in that target. It is a recipe for panic cuts in public investment a year or two before the target date.

I fear George Osborne has totally discredited the idea of a fiscal rule. Remember that Labour stuck to its fiscal rules for 10 years, before they inevitably fell victim to the largest recession since the 1930s. Yes there was fiddling at the margin, but the important point was that they did have a strong influence on what the Chancellor did. I now suspect that, by breaking a whole series of rules within a shorter period of years, whatever a Conservative Chancellor says has become pretty worthless.

There is this great chart in the OBR’s autumn statement document. 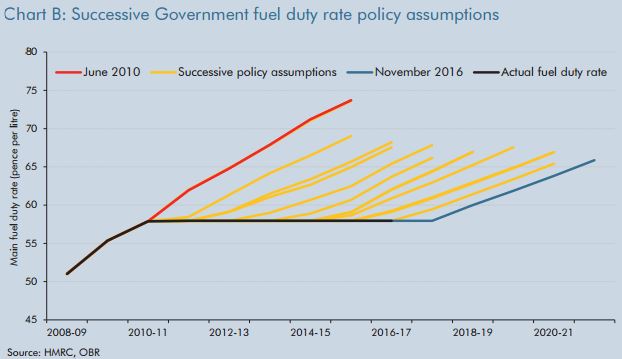 It shows how Conservative Chancellors keep postponing rises in fuel duty. One obvious question is why. But the OBR is also concerned about whether this makes a mockery of its forecasts. Each year they are obliged by parliament to continue to assume that in all subsequent years the government will raise fuel duty after each ‘one-off’ cut. And almost each time the Chancellor announces a ‘give away’ for motorists: they will postpone any increase ‘just for this year’. You can see why they do it: it allows the papers to write favourable headlines. But if they really are going to go on doing this, it means that really their policy is to have no increases in fuel duty. Fiscal forecasts based on the assumption that they will increase fuel duty will be much too optimistic. The government is fooling parliament and the public, but the OBR cannot do anything about it because of the restrictive rules it is forced to operate under.

The cost of Brexit

The big news was of course the higher levels of borrowing. As this table shows, a significant part of that is due to the fiscal costs of Brexit. 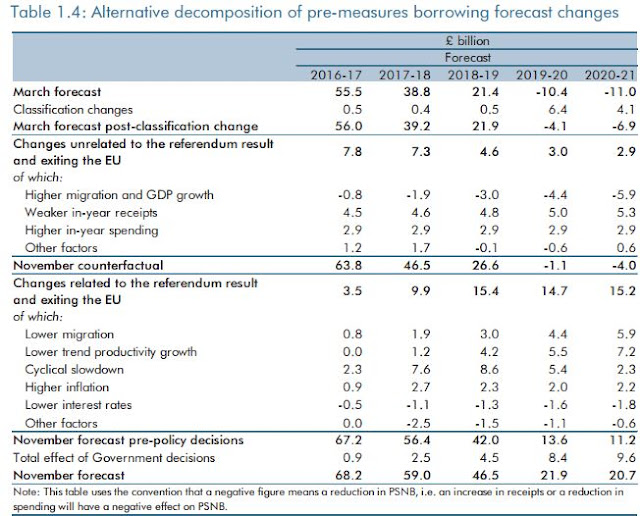 Surprise surprise - there will actually be less money available for the NHS and other public services after leaving, rather than more. It is as if that red Leave bus just crashed and rolled over so it is now upside down. The two big factors are lower productivity growth and lower immigration. The OBR has, unsurprisingly, followed their own previous analysis (immigration) and the consensus economist view (productivity growth).

I can almost guarantee that the Sun and Mail will make no mention of this - or if they do it will only be to rubbish the OBR. So, following the theme of my lecture, I really hope that the broadcasters’ nightly news programmes pick this up. Channel 4 news did do so, but I didn’t watch the others (let me know in comments).

The NHS and squeezing the public sector

Not a penny more for an NHS in crisis. Make no mistake, as this blog has shown before, the current crisis in the NHS is simply because it has been starved of resources for the last six years. I really wish Labour (it has to be them, because they are the only party who the media will take any notice of) would run a campaign that busted the myth of a ‘protected’ NHS. But what Hammond’s refusal to do anything about this shows is that this government is continuing the squeeze of the public sector begun by the Coalition. Here is the relevant chart from the OBR. 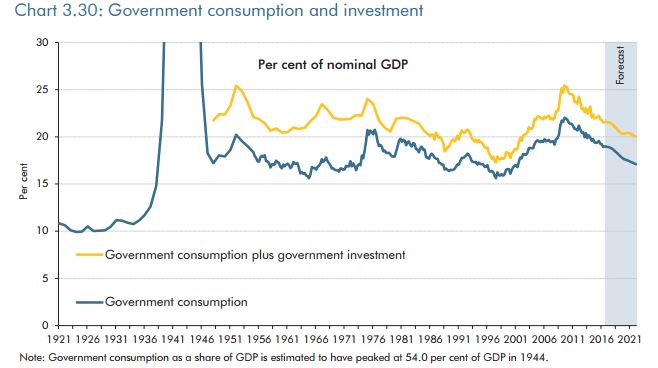