However, there are occasional aberrations. EZ interest rates went up in 2011 rather than down and the MPC almost did the same. (Let’s not mention Sweden.) And then, last month, three members of the MPC voted to raise interest rates. After I had had my John McEnroe moment, I quickly realised that these three members were making exactly the same mistake as a different three made in 2011. Only this time they had less excuse.

The only thing you might worry about in these circumstances is that inflation might be more persistent than you thought because nominal wages start to rise as workers try and avoid falls in real wages. That didn’t happen in 2011 even though inflation reached 5%, and inflation did come quickly back to near target within a year. An increase in interest rates would have achieved nothing except make the recession worse.

Exactly the same applies now, with the only difference being inflation is still less than 3%. We can be sure of this by looking at what is happening to nominal wages. UK nominal wages have increased in the four months of 2017 by less than 2% compared to a year earlier, which represents a distinctly lower rate of growth than in the second half of 2016. A relative price change, like a depreciation, can only shift inflation permanently higher if wage inflation starts rising. Right now it is falling.

When I recently wrote about increasing the inflation target, I knew I would get at least one comment saying wouldn’t this reduce real wages even further. As I always do, I explained that raising the inflation target should raise the rate of increase of all nominal quantities by the same amount, which is what economists mean by inflation. But it seems the same basic point has to be made to these three members of the MPC too: inflation is not just the rate of change of the consumer price index.

The weakness of real wages in the face of rising inflation (and remember this increase in inflation was predictable the moment Brexit happened) also tells us something important about the UK labour market. Here is the Resolution Foundation’s underemployment measure, based on work by Bell and Blanchflower. It shows the index still above its level in the first half of the 2000s. 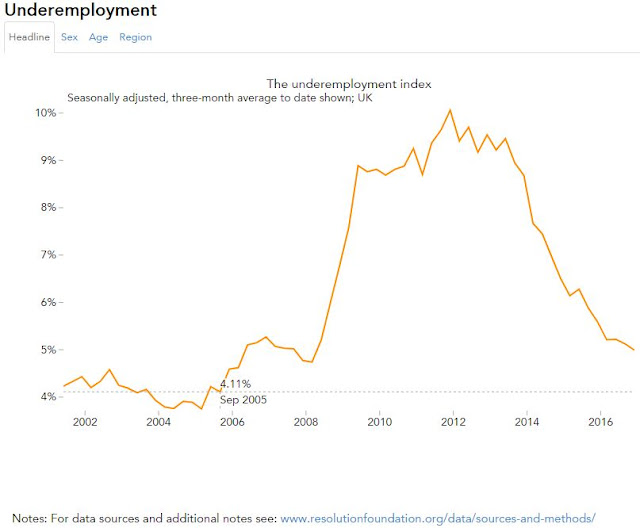 But perhaps more importantly, the weakness of nominal wages suggests that the NAIRU may have decreased since then. A good rule for monetary policymakers right now is to only think about raising interest rates when nominal wage inflation starts rising by more than 2% above underlying labour productivity growth.

The day this post was published a speech from MPC member Andy Haldane was also published. Haldane did not vote for higher interest rates in May. It is a speech of two halves. The first presents a detailed and analytical discussion of the changing nature of the UK labour market, and his conclusion is that the NAIRU may well have declined as a result. He therefore provides solid evidence for the conjecture in my last paragraph.

However the second half of the speech is in complete contrast. It involves a kind of unstructured shopping list of pros and cons for raising rates, full of references to things like 'political uncertainty' and equity markets and 'inflation narratives'. As a result of that, he favours raising rates earlier than markets expect. Sterling rose on publication of the speech. (If nothing else, sterling's reaction to first Carney's speech and then this has been a nice vindication of uncovered interest parity (UIP) theory.)

I think there is another way of describing this speech of two halves. The first involves a careful analysis of a key driver of the inflationary process (and finds a strong explanation of why wage inflation is currently weak). The second is unstructured list making, with a decision based on some unexplained intuitive process. I may be a little harsh, but it looks to me like the best and worst of monetary policy making.
Posted by Mainly Macro at 08:21