Imagine the following economy. Growth has been strong for a number of years: 2.7% 2014, 3.8% 2015, 3.1% 2016 and is expected to be above 3% again in 2017. The OECD also think the output gap is positive i.e. output is above the sustainable rate. Inflation was bobbing around zero for a few years, but since 2016 has gradually crept up to the target of 2%. It was just over 2% in the summer, but dipped just below target in the last two months. Fiscal policy is broadly neutral, and is expected to remain so. The unemployment rate is still slightly above 6%, but the average rate since the crisis in the early 1990s is over 7%.

We are talking about the very healthy Swedish economy. An economy where inflation is at target and some experts think the economy is running hot. What level do you think the Riksbank, Sweden’s independent central bank, has set its interest rate at? The answer is -0.5%. What is more the general expectation (the Riksbank publishes its interest rate forecast) is that rates will not start rising above -0.5% before min-2018. In addition, the Riksbank is undertaking its form of QE.

What can explain this dovish behaviour? Central banks are supposed to be inflation averse, and elsewhere they talk about the need to ‘normalise’ rates the moment the economy starts recovering, so that they are ‘ahead of the curve’. Part of the answer lies in the past. I have told the story in real time (here, then here, then here), so just a short synopsis this time. The Riksbank started raising interest rates from its then lower bound of 0.25% towards the end of 2010, because they were worried about a potential housing bubble. Rates continued to rise to 2%, but inflation began to fall, and did not stop until it hit zero at the end of 2012. There was no growth in GDP in 2012. The eminent macroeconomist Lars Svensson resigned from the Riksbank in protest at this departure from inflation targeting. 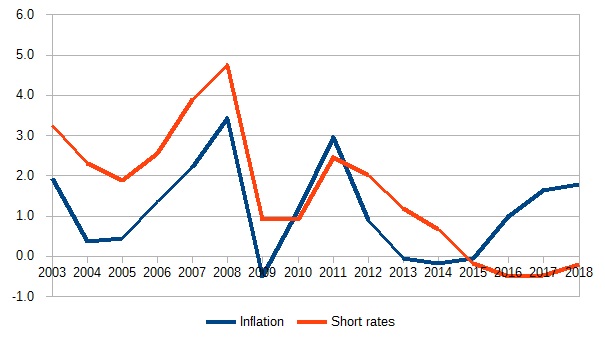 In 2012 the Riksbank admitted their mistake, and started lowering rates to the new lower bound of -0.5%, where they have been since the beginning of 2016. Having made the error of prematurely raising rates once, they are in no hurry to risk doing so again.

The Swedish experience I think illustrates a number of points that could also be applied to other central banks.


It could still go wrong for Sweden, but if it does not then the Riksbank's 2010/11 mistake may have a silver lining. By making the central bank extremely dovish, they have allowed the Swedish economy to grow strongly and unemployment to fall substantially. Perhaps the mantra adopted by other central banks of needing to be ahead of the curve in terms of early ‘normalisation’ is not such a clever idea.