Could the US become a democratic dictatorship?

Consider Hungary. Its Prime Minister Viktor Orbán has pledged to create an illiberal state like Russia or China. Perhaps as a result, European Commission President Jean-Claude Juncker at a 2015 EU summit dispensed with diplomatic protocol to greet Orbán with a "Hello, dictator." To further this aim he has gone about controlling the media and courts either directly or through placement of allies, with complete success. Yet he and his party remain popular in part because of the lethal combination of extreme nationalism, scaremongering about migrants and antagonism against Muslims and Jews. In addition NGOs have been attacked, which has led to legal proceedings by the European Commission. A host of public bodies like its fiscal council, the central bank, and the national elections commission, have been abolished or their independence limited.

Yet Hungary is still a democracy in the sense of having reasonably genuine elections. As the opposition is fragmented there is little need to resort to the kind of tactics used in other democracies, such as Turkey. When occasionally the opposition does win a local election, Orbán unleashes the full might of his nationalist, enemies at the door, enemies within narrative at them. With almost total control of the media and civil institutions, he can make life very difficult for the opposition. He won his last election with ease. It is an effective model that could survive for many years.

So would it be reasonable to call Hungary a democratic dictatorship [1], or is that just a contradiction in terms? Hungary is no longer a pluralist democracy, by which I mean there are no independent centres of power. But there are still elections, which are not a complete fiction. But you cannot call elections where one side completely controls the media fair. The acid test would be if a unified opposition under a credible leader ever did appear whether he would ever be allowed to win.

“American media should study Hungary’s record,” Newt Gingrich declared after a visit to Hungary. He was talking about the 13ft-high razor-wire border fence that Orban erected against the influx of “foreigners”, but few can doubt that Trump would like to emulate Orbán in other ways. He already has what is effectively a state TV station, the widely watched Fox News. His attacks on the independent press are relentless. He does not yet control the media in the same way as Orbán does, but he gets his apologists on CNN and other stations as these stations try and keep ‘balanced’.

Having Fox on his side is crucial in his ability to control the Republicans in Congress. Speak out and you risk losing your seat in a primary election against a Trump loyalist. The few who do speak out tend to be retiring from politics. The democratic norms of politics that have stood for decades in the US have gone out of the window. He breaks the norms because he knows no one will stop him. Other countries that are able to have long recognised that the way to get foreign policy favours is to grant some business perk to him or his family. (We see similar corruption in Hungary.)

He may not control the courts to the extent that Orban does, but he is not miles away. Soon he, or at least his party, will get a majority on the supreme court. He has pardoned whoever he likes at his whim. The Republican party have retained a majority in the House in part because of gerrymandering, and the supreme court allows this to continue. Orbán fights a long but successful battle to close down a university in Budapest, while Trump’s climate change denying appointees try to close down scientific research in the US. (On the latter, see this excellent essay from Carl Zimmer HT Tim Harford.)

Trump makes no secret of his admiration for dictators. In a way it does not really matter if Putin has ‘something on him’ in the form of a tape of whatever, as Trump admires Putin anyway as a strong man leading his nation. His natural enemy is Europe: hence his attack on Merkel and his constant and incorrect references to rising crime as a cost of immigration in Europe.

Another way of looking at this is to consider human rights and their suppression. Hungary has just passed a law making it illegal to provide legal help to undocumented immigrants seeking asylum, as part of a set of bills incredibly called ‘Stop Soros’. George Soros has become Orbán’s bogeyman. Trump separates the children of illegal immigrants from their families. As Fintan O’Toole says, this has not been a ‘mistake’ by Trump, but a trial run

“to undermine moral boundaries, inure people to the acceptance of acts of extreme cruelty. Like hounds, people have to be blooded. They have to be given the taste for savagery. Fascism does this by building up the sense of threat from a despised out-group”


Or to deal with an infestation of immigrants, as Trump said recently. And O’Toole thinks the experiment was a success: the base were happy, and Fox news talked about child actors pretending to cry. Italy’s new interior minister calls for a “mass cleansing” of migrants from “entire parts” of the country, street by street.

Arguments that democracy is still safe in the US seem rather naive. A Washington Post piece from just a year ago says there are four barriers to the US becoming a ‘populist’ state. The four are the independence of congress and the judiciary, being restrained by the Republican party, limited patronage powers, and the absence of any crisis. The first two have not done too well and the last two do not seem to matter. Tyler Cowan thinks the US government is just too large and complex for one man or group to take control. He is correct insofar as Mueller has been allowed to continue. But there is little chance of Trump being impeached by this Republican party. Whether Mueller is allowed to continue depends a lot on whether he goes after Trump family members, and Mueller probably understands that. The important point is that Trump does not need to control every part of government to control what happens.

Trump certainly acts like a dictator would act. The barriers to Trump becoming an Orbán type figure are that his supporters do not control most of the media, and he faces a single and organised opposition party. These are the two threads by which this pluralist democracy hangs. You might think it an exaggeration to call these two only threads, and I hope we will see that it is in the midterms, but there are worrying signs in the US and elsewhere that popular support for democracy is falling, as documented by Yascha Mounk in a book reviewed here. The fact that Trump could be elected and then supported in the first place by one of the two main political parties in the US is a clear sign that all is not well with US democracy. Those, like Paul Krugman, who have for a long time appeared ‘shrill’ about what was happening to the Republican party have been fully justified in their fears.

The rise of the far right and democratic dictatorships in the West have happen before, of course. It is no coincidence that in the 1930s and now economies were scarred by deep recessions followed by bad policy. That may be important in part because it fosters intolerance of ‘outsiders’, particularly immigrants, which parties of both the far right and unfortunately the centre right have exploited. (In the UK, and also in Hungary and Poland, the EU has also become an outsider.) Since perhaps Nixon, the Republicans have exploited race: more explicitly and vigorously as time has gone on. Parties of the right do this in part because their backers want to avoid redistribution being used as a way of mitigating the impact of bad economic times, and focusing on social conservatism can capture voters who would otherwise vote left on economic issues. I have described both the bad policies (austerity and fears about immigration) as forms of deceit (using debt as a cover for reducing the state and setting targets for immigration without intending to meet them), and collectively as neoliberal overreach.

If the demonisation of immigrants is the common thread in these moves towards democratic dictatorships, then it becomes important to resist the early stages of this process. One lesson of the experience across countries is that popular concern is not primarily about numbers. It is not the reaction of citizens worried about being overwhelmed by immigrants. Less than 5% of the population in Hungary are immigrants: 3% if you count only immigrants from outside the EU. Nor is it true that attitudes to immigration are always going to be hostile. This year for the first time in a decade more people in the US think legal immigration should be increased rather than decreased.

But this idea is difficult to get across. In the UK for example it is true that rising concern about immigration follows rising numbers, but it follows increased newspaper coverage even more closely, and which newspapers people read is the best explainer of immigration concern. [2] With a few important exceptions the concern is generally about immigration ‘in the country’ rather than locally. In the UK stoking fear about immigration may not as yet have created the conditions for a democratic dictatorship, but it has spawned a ‘hostile environment’ policy that led people to be locked up and deported illegally, and of course it was critical in forcing the country make one of its biggest policy errors for a generation.

I have heard people say that we have to have Brexit because otherwise half the country will feel betrayed (as opposed to the other half already feeling that). But in reality the opposite is true. Xenophobia becomes strong when economic conditions are bad, and Brexit will make them worse. Brexiters are going to feel betrayed anyway when they realised they have been sold snake oil. If we are to avoid a self reinforcing cycle of economic and political decline, we must give priority to the economy and stop scapegoating immigrants for each policy failure. 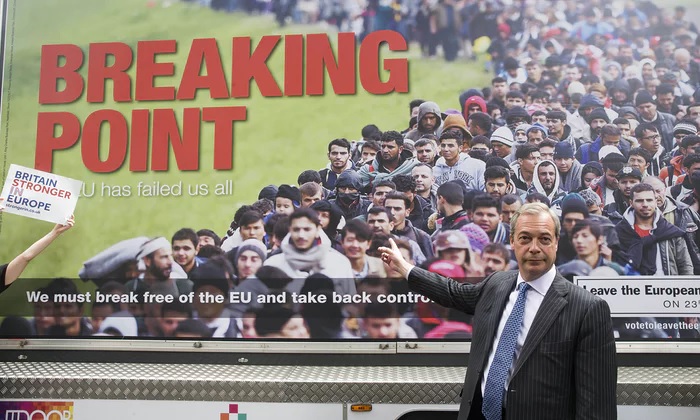 [1] Whether the term dictatorship is more accurate than one party state or the term plutocracy that I have used before is interesting, but not I think critical for the discussion here.

[2] Let me try and be clear what I mean by immigration concern not being about numbers. Of course large numbers of immigrants make it easier for newspapers to talk about ‘floods’ and ‘being overwhelmed’. The mistake is to think that if only the numbers could be reduced somewhat, the concern would disappear. It will not because it is not in the interests of those whipping up concern for that to happen. Any attempt to appease the concern by, for example, vetting patients in A&E only gives credibility to the idea that immigrants are responsible for reduced access to the NHS: in reality the opposite is true.