Who still thinks austerity was a good idea?

It is getting towards autumn in 2020, and the new regime of test/trace and isolate with occasional local lockdowns seems to be working. The economy has begun to recover from the 30% fall in GDP compared to a year earlier in the second quarter. But the recovery is not what the media is talking about. Instead they are focusing on the massive government budget deficit that has been a natural consequence of that fall in GDP and the huge government support effort. In response to media concern, the government announces an immediate 5 year programme of cutbacks to government spending, although the NHS will be “protected”.

If you think that last sentence is unlikely to happen, I would agree. But this is pretty well what happened in the UK and elsewhere after the Global Financial Crisis (GFC). The GFC led to the largest recession since WWII, and as a result of that and the government’s measures to support the economy, the deficit rose rapidly. It was a record post-war deficit, just as the deficit over the next three months will also be a new record high. George Osborne condemned the equivalent of today’s measures to support the economy because they would increase the deficit. And the media followed his lead in making the rising deficit, rather than the economic recovery, the centre of concern.

Of course these two situations are not exactly the same. Whereas what was required, and what happened, in 2009 was a standard fiscal stimulus to combat deficient demand, today we have targeted fiscal support to help people through the consequences of social distancing. A generic fiscal stimulus would be of limited use today, when we are preventing consumers spending their money on a large range of consumer goods. (There is nevertheless a case for immediate transfers to those who are poor.) But what both have in common is that they, coupled with the impact of falling GDP, will raise the government's deficit substantially.

To start obsessing about the deficit once deaths start falling would be a crazy thing to do, just as it was a crazy thing to do after the GFC once output had stopped falling. By cutting public investment sharply, Osborne delayed the recovery from 2010 until 2013. The idea that the NHS was protected was classic spin: a healthy NHS needs to grow faster than GDP to cope with an ageing population, technological change and other well known factors. As the chart below shows, the government over the last ten years has shrunk the share of health spending in GDP over an unprecedented ten year period, and a system that today cannot cope with normal loads is the result. As the chart also shows, the amount spent on health rose in real terms, illustrating that just increasing real spending is not enough to truly protect the NHS. 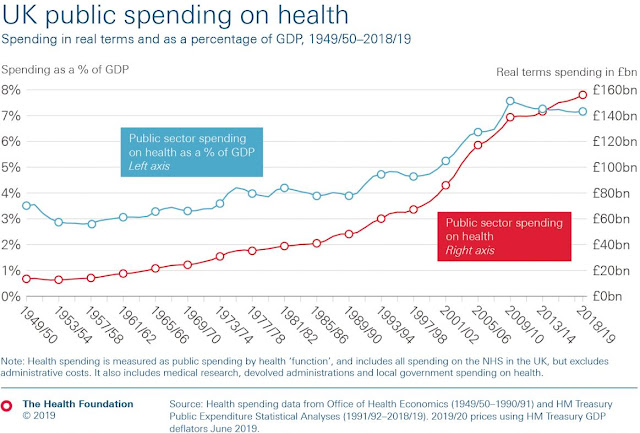 The consequences of that shrinking of health spending can be seen today, as hospitals struggle to cope with the pandemic and other crucial operations are delayed. To understand what ‘running the NHS too hot’ actually means, I strongly recommend this from Chris Cook. But we were told constantly from 2010 that austerity had to be done, because reducing the deficit was the key economic goal. As subsequent research has shown, nearly all the mainstream media not only helped create the initial panic over the deficit, but continued to treat its reduction as the key test of economic success.

A group of academics in the US and UK made great efforts to successfully knock down every argument put forward for austerity. For example the government at the time talked about an imminent funding crisis that the coalition government with its actions just avoided. There was no evidence for this, beyond City folk predicting doom and gloom because they see the increased supply of gilts and ignore the increasing demand for them. These City folk were wrong and we were right, because interest rates on UK government debt fell. In one of my first blog posts I pointed out that for a country like the UK where the central bank (as part of its QE programme) was buying large quantities of government debt could not suffer a funding crisis. This, together with standard Keynesian economics, was a knock down argument against the need for austerity, but the media carried on regardless.

The opposition’s initial attempt to strike some balance between the goals of reducing the deficit and protecting the recovery (a misguided balance - the recovery should have come first) were abandoned because the media had decided that reducing the deficit was the only game in town. As the majority of the media became more obsessed by the deficit, academic opinion was moving in the opposite direction, with a modest majority against austerity becoming an overwhelming majority. Here is a 2014 poll of leading US academics on whether Obama’s stimulus package was a good idea. 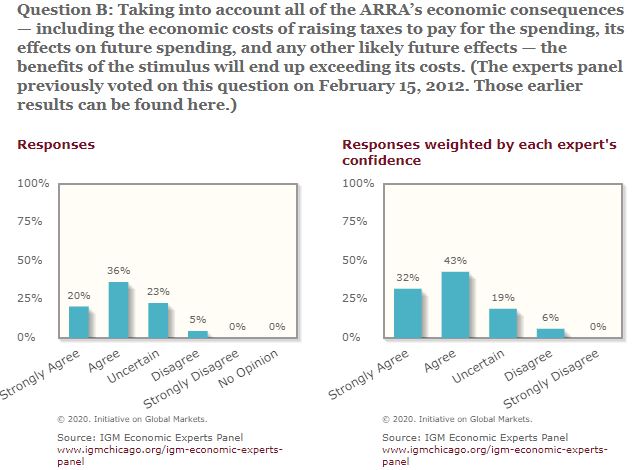 Despite the, by then clear, consensus from academic economists that austerity was a huge mistake, the media carried on promoting deficit reduction. This played a major role in the Conservatives winning the 2015 General Election. Real wages falling by an unprecedented amount? No, the economy is strong because the deficit had come down, according to the bizarre narrative that dominated the media.

After 2015 Osborne and his successor continued with austerity, making an already bad NHS situation even worse. As Jonathan Portes says


“The austerity programme of the last decade has prepared us neither for the health, social or economic consequences of the Covid-19 crisis; instead, it has left us far more vulnerable than necessary.”

Austerity is why the failures identified in Operation Cygnus, a 2016 pandemic simulation, were not rectified. It is important to understand this was all a failure of our media as well as a failure of the politicians of the party that still governs us. The costs of that failure is not only an NHS horribly vulnerable, but a loss of resources worth around £10,000 for the average household in the UK. If, as some economists now argue, austerity has permanently lowered potential GDP, the costs will be even greater still.

Will history repeat itself? Will those Paul Krugman labels ‘deficit scolds’ force the government to take measures to reduce the deficit before the economy has fully recovered from this pandemic? In the UK I suspect not, for a number of reasons. The first is that Boris Johnson in 2020 is not David Cameron in 2010. The second is that many have learnt the mistakes of austerity. The third is that the conditions of 2010 were particularly favourable in getting people to accept austerity was the right thing to do.

There are a number of reasons why austerity obtained popular support for many years. First, we had just had a financial crisis, and so the idea that the financial markets were like a capricious god that had to be appeased was strong. Second, consumers were saving more and borrowing less out of choice, so the idea that governments should do the same seemed common sense, to both voters and political commentators. It was this common sense that Keynes had shown to be disastrous in the 1930s. Third, in the UK and US the right wing parties that championed austerity were in opposition as the deficit rose, but now they are in power.

Perhaps governments will eventually decide that taxes need to rise once the economic recovery from this virus is complete. But that is a conversation to be had way down the track, and should not stop governments doing all they can to support people from the consequences of social distancing and then ensuring the economy recovers once social distancing ends. Those in the media who still want to panic about the deficit need to be reminded of the damage their siren calls did a decade ago.