A government without common sense, and with class arrogance

Recently the Prime Minister urged workers and employers to use their ‘good solid British common sense’ to decide what was safe with the recent relaxation of the lockdown. Which prompts an obvious question (thanks @SuffolkJason). What has happened to the government’s common sense in dealing with coronavirus?

When you see a pandemic sweeping China and with every chance of it coming to the UK, isn’t it common sense to prepare for that possibility by

When the first cases arrive in the UK, isn’t it common sense to do some things to help your test, trace and isolate (TTI) infrastructure by, for example, stopping flights coming from countries with many cases, or at least enforcing quarantine?

Once the number of cases begins to overwhelm your TTI operation (which you will be improving by hiring more people to do the tracing and increasing testing capability), you have a choice between a lockdown (the choice almost all other countries are taking) or letting the virus infect a majority of the population in a controlled way (what one country, Sweden, is doing). The latter will involve hundreds of thousands of deaths. Isn’t the common sense choice a lockdown in those circumstances, seeing that the basic duty of a government is to avoid its citizen’s dying.

Common sense is not always a reliable guide, and it should always defer to science if there is a conflict. But science means the consensus among scientists, and not the collective views of a few in a committee. The collective scientific view was that there was an alternative way of controlling the virus beyond total lockdown, and that is some form of partial lockdown combined with a TTI infrastructure that could take over from full lockdown once numbers of new infections had been brought down.

There will always be individual scientists who say that TTI cannot work, as in the case of Sweden. Was that the case in the UK, or were the scientists advising the government told that testing could not be expanded? That will be for an inquiry to sort out. But no politician with common sense allows hundreds of thousands of their citizens to die without trying those alternatives.

Ironically we managed to give our potential policymakers a test for common sense a year before the pandemic hit. We set them two questions that would sort out the small minority that appeared to lack any common sense. The test involved just two questions.


Anyone answering yes to both questions clearly lacked any common sense. What could possibly be the sense in isolating yourself from your closest and largest trading partner, when you were prepared to do trade deals with other countries?

You know what happened next. We have a government with a cabinet where almost every member has been chosen because they answered yes to both questions. (We could have chosen to have a government whose leaders did not answer yes to both questions. However the powers that be, including parts of the Labour establishment, decided that was too great a price to pay, even if it meant leaving the EU and having a government without common sense. You could say that they, too, did not have common sense.)

You might retort that UK voters also failed to have common sense. But you cannot have common sense if you do not have the relevant information. Like, for example, that if you stop EU migrants coming by ending free movement that will just lead to more non-EU immigration (source). 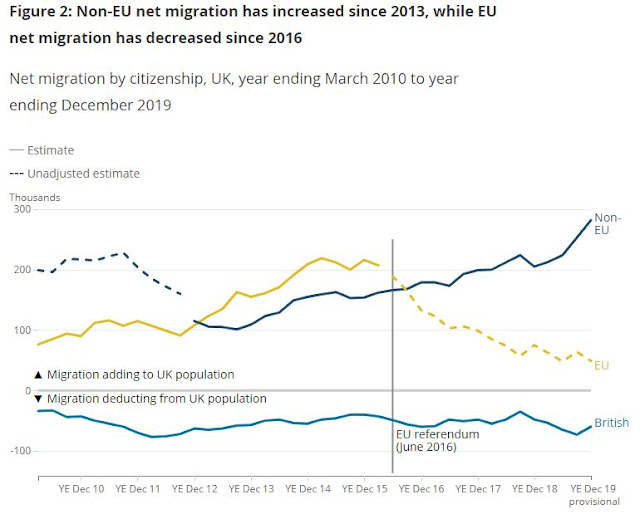 It takes some skill to ensure that enough people hear fake stories such that they vote for decisions which violate common sense. Dominic Cummings has that skill set, which is why he is so essential to the Prime Minister, and why Johnson would burn so much of his own political capital to keep him. I also suspect that Johnson would flounder without him.

Lacking common sense does not come from stupidity, but from letting your judgement be clouded by an ideology that puts the economy and the freedom to do business above everything else, and where freedom is defined not in terms of the ability to do things (including avoiding catching a virus) but in terms of the absence of any kind of government intervention designed to protect workers or the environment. This hatred of state interference in the economy means you are inclined to do nothing when threatened with the biggest health crisis in a generation.

If you have the common sense to understand why you needed an economic and social lockdown to stop the pandemic getting out of control, you will also have the sense to realise that the lockdown can only be relaxed step by step, when an alternative control mechanism is in place. Yet even here the government has shown it lacks common sense. Sending many people back to work is a relaxation in the lockdown, and it was done with no mechanism in place to isolate the colleagues of workers who caught the virus as a result.

We had a functioning test, trace and isolate (TTI) regime in place when the virus first hit the UK, and it helped to keep numbers low for a while with little supporting measures from the government. It would seem obvious, therefore, to build a more effective TTI infrastructure by expanding the infrastructure that already works. But that would be common sense. Ideology dictates that the government farms the whole process out to some private companies with no experience at all. No doubt they told the government that their infrastructure would be “world-beating” and ministers liked the sound of that. We can but hope that it works.

In this short article for the Daily Mirror I set out how we get from today to a full economic recovery, applying common sense with a bit of macroeconomic knowledge. V-shaped recoveries are possible. Our government has already started out on a different path, easing lockdown before TTI is ready and when daily infections remain high, which raises the danger of delaying the point at which the economy can recover.
………………………………………………………………………

While ideology accounts for part of the reason why this government has failed so badly, and carries on failing, there is something else. That something is an attitude of being apart, or more accurately above, most other people. It is the attitude that some public schools seem to encourage. If you break the rules somebody else will sort things out, or literally clear up the mess if you go trashing after finishing your exams at Oxford.

While in some that creates a kind of paternalism, and in a few revolutionaries, in many it creates contempt. The contempt of those that can so easily manipulate others. Cummings ignored the lockdown rules because he believes rules do not apply to people like him. Johnson has been breaking rules all his life, and he has never really suffered for it. With privilege you can break the rules. You can have contempt for those who obey rules, like Rees Mogg saying those who died in Grenfell Tower should have ignored instructions to stay in their flat. For those for whom breaking the rules is common sense. It is the arrogance to charge some of those in the NHS we helped save your life an extra fee to use the service they work in.

Contrast that with anyone claiming universal credit who is late for an appointment at a job centre and has their money stopped, however good the reason they were late. They have no privileges at all. No press conference at No.10. When neoliberal ideology is mixed with the arrogance of the upper class and the contempt of those who manipulate the opinions of voters you get a lethal combination. A combination that leads to the second highest deaths from coronavirus in the world behind the US, and higher than the US when normalised by population size. About one in a thousand of UK citizens has died as a result of coronavirus, and that will be the enduring legacy of Boris Johnson and Dominic Cummings.