How governments in the West failed to learn

You would think, after so many countries were taken by surprise by a pandemic caused by a new virus in the Spring of this year, these countries would resolve to never let it happen again. They would be mad, knowing what they now know, to let cases explode in a similar manner to they did earlier this year. In what we call the West we like to think we have reasonably rational governments that listen to expert advice on matters of life and death.

Well at least some of us thought that. I am prepared to make an exception of the UK and US. The UK is run by fantasists who thought we would hold all the cards in any negotiations with the EU and there would be sunlit uplands. These are the kind of people who would be quite happy to ignore experts. Some of them are even busy right now promoting a kind of death cult. The US is run by someone who only thinks of himself. I could make an exception in both these cases.

Now look at this chart. 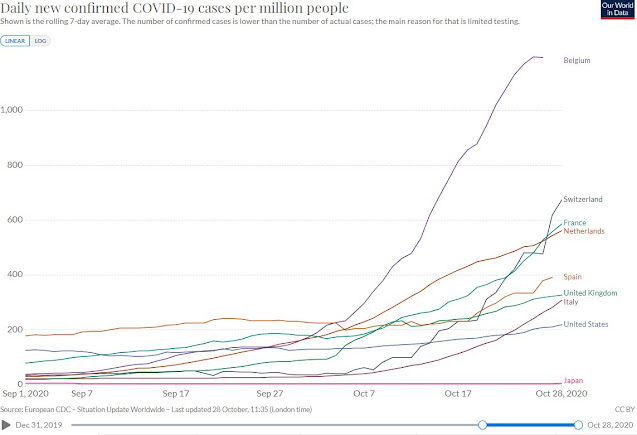 These are new COVID cases each day per million people. Cases in most of the countries shown here began rising seriously in September. (Both the US and Spain were already high.) Yet only now, nearly two months later, are some countries beginning to repeat the lockdowns that were so effective at getting cases down in the Spring. Two months of doing nothing or doing very little. Two months of keeping restaurants open where the virus was free to spread. Two months of doing too little, too late.

I don’t know enough about each of these countries, but I’d hazard a guess that epidemiologists and public health experts in all of these cases are in despair at the lack of action shown by their politicians. What were the politicians thinking? That it would all go away, Donald Trump style. Or more likely that they were balancing health concerns against the economy. That was why I wrote this post.

There is one country stuck at the bottom of the chart above, Japan, which I’ll come to shortly. But first how about some countries in Europe who I always think of as having relatively rational governments: Germany (because it is run by a scientist) and the Scandivian countries. 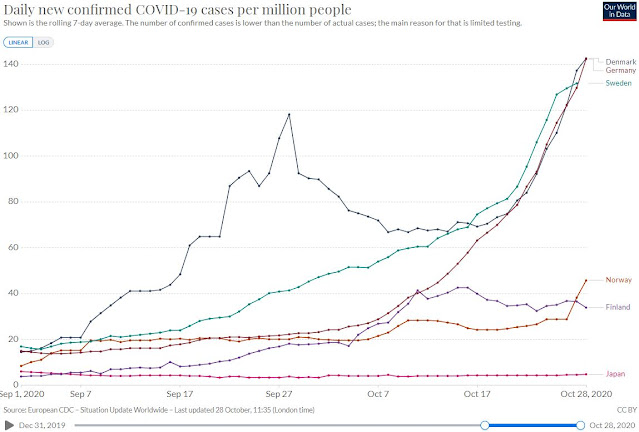 My hypothesis is correct. Compare the left hand scales of the two charts. These countries would all be stuck at the bottom of the previous chart. However for Denmark, Germany and Sweden the pattern is similar, if at a much lower level of cases. Only Norway and Finland have avoided exponential growth during this period. The media should stop looking at Sweden, and look at Finland instead.

Japan is stuck very happily at the bottom of this chart too. But it is not alone. Here are some countries in what we sometimes call the Far East. 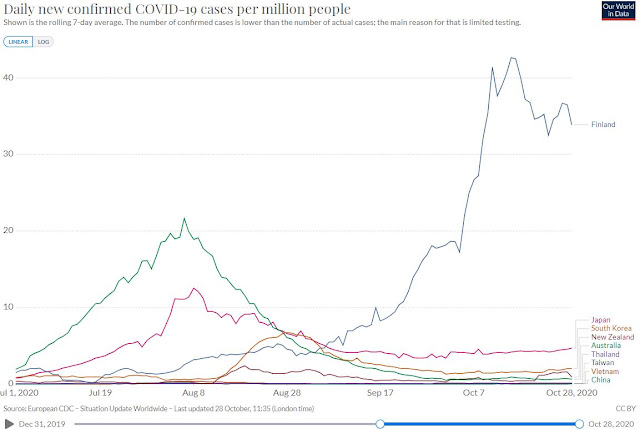 I’ve kept the best of the Scandivian countries, Finland, there for comparison, and started the chart at the beginning or July rather than September. We can see that Australia, and to a much lesser extent Japan, had a flare-up in July and August, but both countries managed to bring it back under control very quickly. South Korea had a smaller flare-up at the end of August but it’s very effective test, trace and isolate (TTI) infrastructure helping bring it quickly under control. To all intents and purposes New Zealand, Australia, Thailand, Taiwan, Vietnam and China have completely suppressed the virus.

There are three overriding lessons. The first is the importance of an effective TTI infrastructure that has the capacity to scale up quickly [1]. The second is that if you start seeing a rapid rise in cases, and your TTI system is beginning to fail, you need to lock down rapidly and hard. Both lessons should have been learnt in Western countries, but were not. One reason may be a third lesson, which is the importance of a clear and shared understanding that the goal is virus suppression. Deaths from the virus are not something to be tolerated as long as they are at a low level, or balanced against the needs of the economy, but something that needs to be reduced to the lowest number possible, and kept there.

We can say, correctly, that unlike the countries in the last chart we in the West are not used to dealing with pandemics as serious as COVID-19. But that is a reasonable excuse for the first wave in the Spring (although not for countries like the UK that lagged behind others), but not for this second wave. Whichever way you look at it, the second COVID wave represents a serious failure of government in most countries.

[1] A weak link for many countries is isolation. Some of the countries above have COVID hotels where those with the virus are isolated. The reason is simply to ensure infected people do not infect others. Many in the West find such an idea intolerable, but Australia only isolates in this way if you have travelled from overseas, so it may not be a necessary requirement for suppression.