Brexit may be pointless, but it will be with us for some time

You have probably read a lot of stuff asking what, precisely, are the benefits of Brexit. I’m going to make some points that try and look at this from the point of view of those who supported Brexit, whether we get a trade deal or not. For those who voted for Brexit the main concrete preoccupation was immigration. Here is the latest version of a chart I have shown before (source): 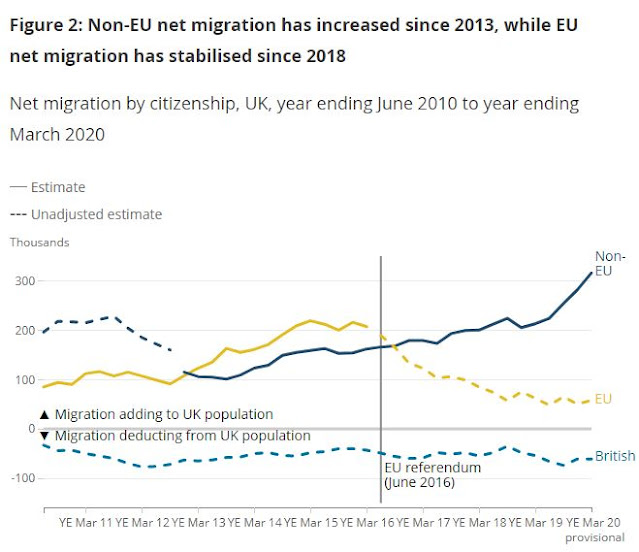 Those voting for Brexit because they wanted low migration will have been disappointed (although I’m not sure how many realise this), because the fall in EU immigration has been matched by an increase in non-EU immigration. Net immigration is slightly higher than it was when the referendum took place. Seems to confirm that immigration really is dominated by firms demanding the best labour (wages unaffected) rather than an increase in labour supply requiring employment (wages fall).

What about sovereignty? For many voters it is about wanting more control over their lives because of things that had nothing to do with being in the EU. For others it is about memories of stories in newspapers which were largely lies. There is no gain in sovereignty for voters as a result of Brexit. Increasingly sovereignty has morphed into crude nationalism.

I have consistently argued that Brexit is much more about the political players who pushed it rather than the voters who adopted it. So what have they gained as a result of Brexit actually happening? The short answer is political power, but that makes Brexit nothing more than a pretext. Those leading Brexiters who were nostalgic for the glory days of ‘global Britain’ have got political isolation, with the UK becoming a country that the outside world increasingly sees as governed by people who don’t know what they are doing and cannot be trusted.

Those who desired a close relationship with the US rather than Europe are finding that the USA in Democrat hands is far more interested in European countries than us. Those who wanted a country that would be dynamised by a bonfire of red tape, labour and environmental regulations are discovering that instead they have landed exporting firms with many extra forms to fill in and that the EU is still able to exert considerable power on these issues even though we are no longer part of the club. Those who, following late-Thatcher, see the EU as threatening attempts to minimise the role of the state realise that they have replaced the EU with the Red Wall voters to whom they promised so much that can only be delivered by state action.

However the power of the Red Wall voter cuts both ways. Those Labour members who despair that every decision that Starmer makes seems to be governed by what Red Wall voters might think have not understood the arithmetic that now determines how elections are won. The distribution of voters by seats means that any party that commands the socially conservative voter always wins. As a result, Labour cannot afford to give the media any issue that might allow Labour to be painted as social liberals.

This also has profound implications for Brexit. Although I have argued that it has ended up doing little for those who either voted for it or championed it, and although it will do extensive damage to the economy, it will be very difficult for any government to begin to reverse it for some time. Fairly obviously no Conservative government will admit that what they have dragged the country through for four years was just pain with no gain. But equally any Labour government will not dare to reignite the Brexit identity that saw them lose so decisively in 2019. There may by now be a majority of voters who think Brexit was a mistake, but that would probably not be enough to win an election even if the anti-Brexit parties were united, and they are not. If Scotland becomes independent the situation only gets worse.

I suspect some Remainers think the economic hit from Brexit will be so obvious that Brexit will lose its current popularity. There are two problems with that view. The first is that, beyond a few big firms in some sectors that initially downsize or close, the economic impact of Brexit is too gradual for our media to pick up. GDP is already estimated to be at least 2% lower as a result of Brexit, and how often have you heard that in the main BBC news bulletins? Remember the media talked about a strong economy in 2015 after the disaster of austerity. Memories of goods shortages and lorry parks will fad as the government and its media puts a COVID recovery down to our new found 'freedom' (HT - RB). The second problem is that, just as the Conservative party will not admit its folly for a long time, neither will the right wing media which played a major part in giving us Brexit. It may take a decade or more before the Brexit identity becomes politically unimportant, unless we adopt a more proportional voting system for General Elections.

This is why I get annoyed by the idea that Remainers should have pushed for a soft Brexit. Remainers were not only right about Brexit, the Remain movement grew in part because the power of the hard line Brexiters became clear. Just suppose May had enacted a softer Brexit (basically staying in the Customs Union) with Labour help. That would just be unfinished business for the Brexiters. The threat from UKIP at the elections, demanding a true Brexit, would still frighten enough Tory MPs and members into choosing Johnson at PM, and we would be back to where we are. Just as UKIP and UKIP-minded Tory MPs forced Cameron to hold a referendum, so they would push the Conservative party to a hard Brexit which could not be defeated at the polls.

Maybe I’m wrong about all this, jaded from four years of Brexit madness, and I hope I am. With that thought, have a good COVID-free Christmas.