How most of the West got the pandemic so badly wrong?

It takes a lot to shock me nowadays, but the failure of most OECD countries over this pandemic I do find shocking. Not in the case of the UK under Johnson, the US under Trump, Brazil under Bolsonaro or India under Modi, as the reasons for their failures are all too obvious. After all Johnson had the idea before the pandemic that the UK should be the one country to opt out of restricting the economy to save lives, and that this would give the UK some big global economic advantage. Only when the implied NHS chaos was explained to him did he change his mind. What I find shocking is the failure of mainland Europe almost without exception

A few countries did completely understand what they needed to do, which was to follow an elimination strategy. If you are still not convinced of the wisdom of this strategy, a recent article in the Lancet should help. It compares the small number of OECD countries (Australia, New Zealand, South Korea, Iceland and Japan) that did undertake an elimination strategy (sometimes called zero-COVID) with most of the other OECD countries that did not. Here is the first chart from that study: 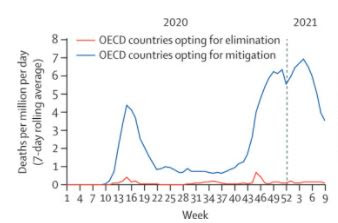 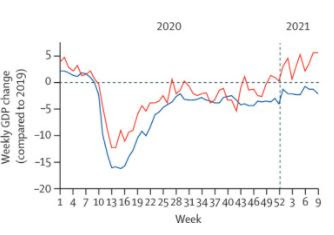 Elimination countries saw a smaller fall in GDP, and a faster recovery at the end of 2020 and so far in 2021. The big lie perpetuated in the majority of OECD countries that failed to go for elimination is that there was a health/economy trade-off. As this table shows that is not true, and as I argued quite soon after the pandemic hit we knew it was not true. The reason it is not true is very simple: if you fail to lockdown hard and early to eliminate the virus, it will carry on growing exponentially either forcing a much longer and stricter lockdown later on and/or people will just stay at home anyway which will have a huge impact on the economy. This is shown clearly in the final chart from the Lancet article: 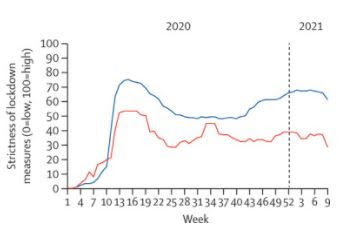 Were the countries that adopted elimination worse off in any way? As far as I can see in only one way: freedom of overseas travel. Elimination requires hotel quarantine or just travel bans to stop COVID cases coming in from abroad. Of course if more countries had adopted an elimination strategy, the less severe those travel restrictions would be because travel would often be possible between elimination countries.

Could the extent of international travel explain why most OECD countries rejected elimination? There is one major reason why this may be important. The bigger your tourism industry is, the bigger is your loss if you essentially end it. However it is difficult to argue that this provides a clear difference between the few countries that have adopted an elimination strategy and those who have not. France certainly has a large number of inward international travellers per head of population compared to most countries, but not compared to Iceland. Germany has a similar level of inward tourism per head as Australia and South Korea, and less than New Zealand. So while pressure from the tourist industry and the airline industry matters, it does not seem critical in preventing countries adopting an elimination strategy.

Having heard countless arguments about why the elimination countries can adopt elimination and other countries cannot, I’ve concluded that looking for any kind of demographic explanation is futile. It is, I believe, much more productive to look at the quality of expert advice received and the quality of governments involved. With just one exception, all the countries that have adopted anything like an elimination strategy (including outside the OECD like China and Vietnam) are in or are close to what we call the far East, and have had recent experience with severe pandemics. Australia and New Zealand have undoubtedly been influenced by that experience. In contrast the West has not, and is more used to pandemics involving much less fatal flu viruses.

The exception is Iceland, but it is a small island run by a pretty rational government with excellent testing facilities. New Zealand also had good advice and a rational government. COVID policy in Australia is state specific, and it was states run by Labour that led the way in pursuing an elimination strategy and closing their state borders.

However it is not the failure to adopt an elimination strategy that I find shocking. After all there was no clear consensus among epidemiologists in Europe in favour of elimination before the pandemic started, and there still isn’t even today despite the evidence above. What is true is that this evidence requires before the next pandemic that some consensus is reached among epidemiologists in the West about when (in terms of how infectious and deadly a virus is) eradication becomes a sensible strategy.

What I find shocking is the failure of governments to learn a much simpler and less controversial point, which is that when cases start increasing you lockdown hard and quickly. In other words the second and now third waves we are seeing in Europe is a terrible indictment of the quality of the politicians leading these countries. No one disputes that if countries had locked down earlier and with full severity during the first wave less people would have died and the lockdown would have lasted for less time. (Eradication is about going the extra mile after any lockdown has brought cases right down.)

Yet despite this obvious truth, European politicians have failed to implement this lesson. Failed not once, but twice. In the cases I know about they rejected advice from experts, and tried to get away with weaker restrictions that failed to stem the rise in cases. As I have previously speculated during the second wave, one way to explain it is that businesses hit by lockdowns have a loud voice heard by governments, while the elderly and medics have a much weaker voice. But that explanation is hardly an excuse, particularly as governments are simply responding to myopia or lack of understanding by those pushing against lockdown.

One answer to this political failure is to get better politicians, but that is hard to do. Another which should be much more achievable is to give a greater and much more public voice to experts, so that politicians find it much harder to deviate from their advice. But we also need, and this is a sentence I never expected to write, to give loss of life a greater weight in political calculations. The average COVID death leads to between 10 and 20 years of life lost (e.g. here), but those lost years seem to carry far too little weight among the politicians of the West. That is shocking.