COVID in England, and another wasted summer

One of the rules in this pandemic is that Johnson’s government does not learn from mistakes. Johnson, his ministers and many of his MPs prefer a self-serving libertarianism to looking at evidence. As a result, England has got rid of every measure aimed at reducing the chance of passing on the virus, while most other countries have retained some controls like mask wearing. Ministers are even telling workers to go back into the office, just as they did last summer.

The lesson they failed to learn from the summer of last year is not to imagine you have solved the COVID problem. Last summer cases and deaths were low, restrictions were lifted and despite what their scientists were telling them many in government thought it was time to focus on other issues. Sunak encouraged people to eat out which helped start cases rising again. In the autumn and winter it became clear how foolish that belief was..

This year we are again seeing a similar attitude. This is not helped in some quarters by a kind of perverse triumphalism that COVID cases have for a time fallen or stabilised in England. They said the experts were wrong, we didn’t get 100,000 cases, which implies for them that they were right to ignore the experts when they abandoned all controls. For those of us with painful memories of Brexit, we see a similar pattern repeating itself.

Forecasts in any social science are inherently very difficult. I suspect forecasting in a pandemic, where so much depends on how many people are being cautious, is a bit like economic forecasting: both are almost certain to be wrong. But in both cases it’s the wrong way to judge disciplines. What matters is if they get the policy analysis right. Economists were right that Brexit would be costly for the UK economy. Equally the experts were right that abandoning all restrictions on 19th July would tend to raise case numbers compared to what they would have otherwise been. Unfortunately many on the political right are so determined to ignore science they will take any opportunity to rubbish it.

As the Chart below shows, cases in England began falling from July 17th, while cases in Scotland have been falling since the beginning of July. The difference is probably due to a combination of school holidays and the Euros. 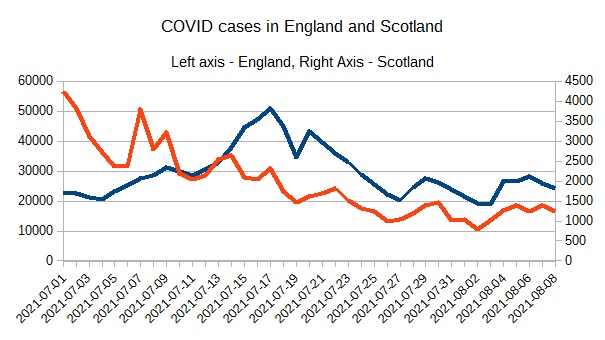 What about the end of restrictions on 19th July. The whole point of Johnson urging people to be careful after 19th July was to minimise that effect. Evidence suggests the advice (or common sense) succeeded in moderating the rise after 19th July. However inevitably that effect will wear off as time goes on. Although cases are now roughly flat in both countries, they are nearly half the level relative to population in Scotland compared to England. Cases are likely to increase again in England, in September if not before.

The government says we have to ‘live with COVID’. But there is a world of difference between COVID being endemic with average cases below 100 or even 1,000 a day compared to average cases at 20,000 a day. Living with COVID is not equivalent to ignoring it. So what should the government be doing now to prepare for autumn and winter. The first obvious move is to vaccinate older children: 12-17 rather than the 16-17 already planned.

Expert opinion is mixed on this issue, but the cost benefit analysis presented in this paper is persuasive. Perhaps for that reason, many other countries are going ahead with vaccinating teens, as this chart from the FT shows. 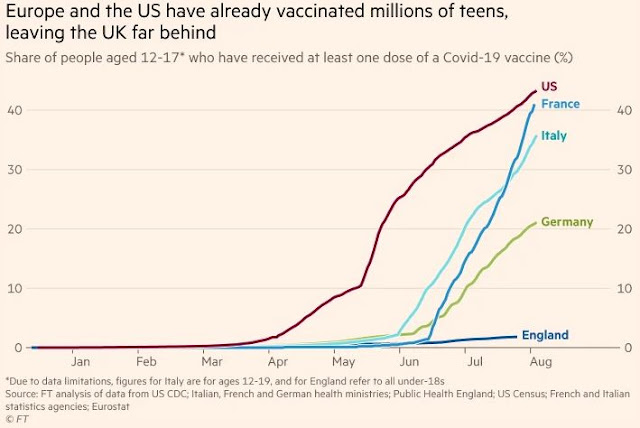 Devi Sridhar has a good discussion of the issues here.

Vaccinating teens with two doses will take some time, so in the meantime the government needs to help making schools safer. Yet making schools safer seems to be the opposite of what Schools minister Gavin Williamson has been doing. His record is lamentable, as a recent report from the Institute for Government shows (good summary also here), and he ended compulsory masks in schools before the government extended that to adults. Apart from bringing back mask wearing, the government should be improving ventilation in schools, following other countries as Stephen Reicher suggests.

The government should also reverse their mistake in reintroducing mandatory mask-wearing in situations where people gather indoors (shops and transport). As I noted here, most people want them to do this, and most experts want this too, but so far the government has allowed the irresponsible minority to determine policy. Why not publicise the use of more effective masks, as well as providing them in hospitals, care homes and to the vulnerable?

As the chart below shows, the UK continues to be the worst performer alongside Spain in terms of the last wave of COVID cases compared to our closest neighbours, although the US with even worse political problems involving the Republican opposition and vaccination may end up surpassing us.(On hospitalisations we are joined by the US, and for deaths Portugal.) 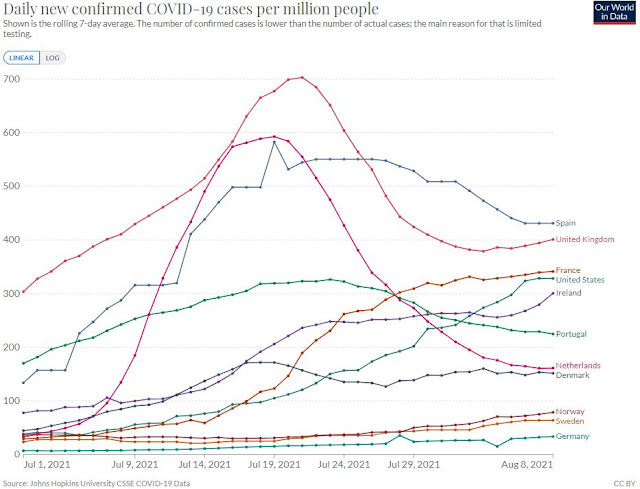 While both the UK and US have particular problems with self-serving libertarianism, this is not absent in other countries, and most governments have struggled to understand the basic rules for dealing with a pandemic, with or without vaccines.

The basic rules of how to handle a pandemic during and after people are vaccinated are straightforward. After an outbreak caused by a new variant, governments should use restrictions and mitigation to bring cases down to a level that allows nearly all people to fully participate in the economy and public life. Once you have cases at that level, you release restrictions to a point that ensures that R stays at or below one. The level of restrictions can vary with the seasons to avoid autumn/winter surges. If that is done, new variants are less likely to emerge at home, deaths, hospitalisations and cases of long covid will be lower and the economy can fully recover. In addition, if dominant variants arrive from abroad (lambda?) you have more resources to react to avoid the point at which hospitals start cancelling cancer operations.

If instead governments allow cases to remain high because they abolished restrictions and failed to fully mitigate, and excuse this failure by talking about saving the economy, they are both lying and are negligent with public health and the economy.