Why have Conservative Chancellors since Osborne been bad for households?

Here is a chart from the resolution foundation 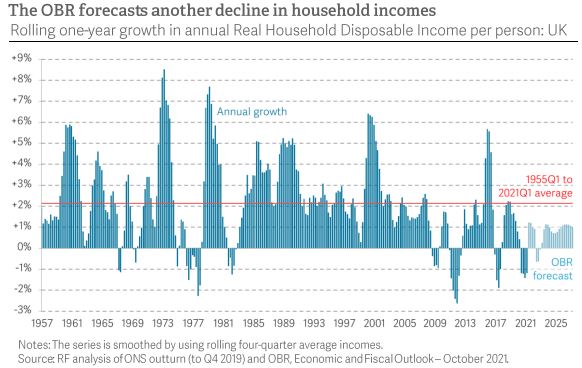 It shows how growth in real disposable income has been well below the post war average since the Global Financial Crisis (GFC). However trend growth rates have been falling in many major economies for some time. What this chart doesn't show is something else has happened, which a chart of levels rather than growth rates reveals. Below I’ve added GDP per head as this is the main determinant of household income. 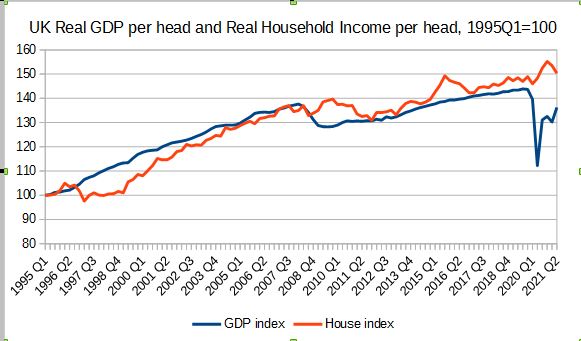 I have shown previously that before the GFC, real GDP per head grew at a remarkably constant trend growth rate of 2.25% a year from 1955 to before the GFC, although with perhaps a slight dip in the 2000s. It collapsed during the GFC. The key point this illustrates is that while previous recessions were followed by a bounce back that returned the economy to its underlying trend, that didn’t happen after the GFC. Instead the path of GDP and household income shifted to a lower level and then grew at a slower rate.

According to the OBR, a similar although more modest pattern will be seen after the pandemic: a permanent downward shift and thereafter permanently lower growth, the latter largely as a result of Brexit.

The two main reasons that real household income will differ from real GDP per head is changes in tax policy and the real exchange rate. In the immediate aftermath of the GFC the Labour government stimulated incomes by cutting VAT, but that was more than reversed subsequently. Incomes benefited from falling commodity prices during 2015 and an appreciation in sterling, but that was quickly reversed after the sterling collapse following the Brexit referendum. Finally the furlough scheme protected incomes during the pandemic. But these are fluctuations around an underlying trend set by GDP per head.

The big question we need to ask is why, for the first time since WWII, GDP per head didn’t return to its pre-recession trend after 2010, and why it will not completely recover from the pandemic. I think the answer lies in this chart.

Why? Because before the GFC recession, interest rates were used to stabilise the economy. Since the GFC they have not been higher than 0.75%, and most of the time they have been as low as the Bank of England dare push them. Unconventional monetary policies are no substitute. As a result, when interest rates are at their lower bound you know the economy is not being stimulated enough.

Although the Labour government did use fiscal stimulus during the recession, this policy was quickly reversed by George Osborne as deficit reduction rather than macroeconomic stabilisation became the central goal of fiscal policy. In my view this was a key reason why the slump in GDP caused by the recession became permanent. Equally Rishi Sunak is now squeezing fiscal policy before the recovery is complete.

Few economists dispute that 2010 austerity was a disaster for the UK’s recovery from recession, and today organisations like the IFS or NIESR have argued that Sunak is making a similar mistake. What economists find harder to explain is why the lack of fiscal stimulus led to a permanent loss in UK incomes, rather than just a delayed recovery. The standard macromodels assume the economy always recovers after a recession, although theory has always been very weak on how that happens without policy intervention [1]

But as the 1930s showed, without help from monetary (interest rates) or fiscal policy recovery may not happen. With interest rates stuck at the lower bound, and no fiscal stimulus, there is no reason why the recovery will come from consumption. The UK savings ratio, which rose sharply during the 2009 recession, stayed high until the year of the Brexit referendum. With austerity in Europe as well there was no boost to exports. So any recovery in private sector demand had to begin with investment.

UK investment collapsed in 2009, and although its growth rate bounced back to average over 3% in the next six years, that was only enough to help offset the deflationary effect of austerity, implying the economy as a whole showed average growth at best, and did not recover the ground lost from the recession. The most robust determinant of investment is GDP growth, because growing demand forces firms to invest more to meet it. Since the second world war governments have ensured that after economic downturns it took the lead in stimulating the economy. That ended in 2010.

Why isn’t this talked about more? Why doesn’t the media talk about how recent Conservative governments have, and perhaps currently are, permanently cut our living standards? This is a question I have asked many times on this blog since it started almost 10 years ago, but following the pandemic and seeing the coverage of COP26 I think this problem isn’t peculiar to economics. With economics, pandemic management and dealing with climate change we have a common theme in the broadcast media, which is that expertise either isn’t referenced, or is devalued compared to party political discourse. [2]

[1] After the GFC, there have been some papers that have looked at why recovery may not happen, and the economy shifts to a worse equilibrium.