The 1970s: myths of left and right about inflation and trade unions

With a global energy price hike generating high inflation in most countries, and central banks reacting by raising interest rates, comparisons with the 1970s are in fashion. The 1970s have for a long time been seen by the political right in the UK and US as the chaos before the calm, where the calm is the advent of neoliberalism. For much the same reasons, a common refrain on the left is that the 1970s were a lot better than what came later in many ways. A good example of the latter is a recent article by Adam Tooze in Foreign Policy. While taking the kind of holistic view he does there has its merits, it also frames the debate as an answer to the question ‘1970s: good or bad?’, while reality is more complex than that. In this post I just want to focus on just two issues: inflation and trade unions.

Tooze says that successfully controlling inflation (through independent central banks) was a victory for conservative politics. Historically inflation produces winners (borrowers) and losers (savers), and so controlling inflation was a victory for savers. In addition high inflation goes with unpredictable volatility. Inflation started at 5% in 1970, rose to over 25% in the mid-seventies, then fell to below 10% only to rise again in the early 1980s. So those who prefer stability, like most business owners, will also prefer low and stable inflation. But the constituency that enjoyed the high and variable inflation of the 1970s is both small and lacks political representation.

The high and variable inflation of the 1970s was generally unpopular, and as a result no political party campaigned for it, just as no political groups today are arguing that the current increase in inflation should continue. I think it would be fairer to say that successfully controlling inflation is generally popular, rather than characterise it as a victory for conservative forces. There are many reasons why high and variable inflation is unpopular. While economists often focus on the costs of unwarranted relative price dispersion, what was far worse in the 1970s was heightened social disruption. Days lost in strikes reached a post-war peak in the 1970s and early 1980s. Strikes are costly because of lost pay and production, but also because of the social dislocation they can cause.

The political right likes to slide from this observation to suggest that strikes are always the fault of workers, or even worse ‘trade union barons’. Their predictability on this makes their claim to be ‘the party of the working class’ risible.

Many on the left do the opposite. Strikes, after all, appear to be the archetypal battle between workers and capital. Unfortunately this overlooks one key point, which is that firms also set prices. As a result, when inflation is widespread strikes are not a battle between wages and profits for their share of any surplus, because employers can often recoup their share of the surplus by raising their prices. The reality is that strikes represent the breakdown of negotiations between two sides, where either workers, employers, both or none can be to blame. Such breakdowns tend to be bad for both the employers and employees involved, and often for many who use the products or services they create. High and volatile inflation goes together with a high number of days lost through strikes for obvious reasons.

The unfortunate reality that is often missed on the left, but which is understood by most macroeconomists, is that a large increase in global energy prices have to lead at some point to a corresponding reduction in real wages (compared to what they otherwise would have been), for reasons I discussed here. Governments can and should act to cushion that effect for those on low incomes (and more widely if higher commodity prices don’t redistribute from consumers to those working to produce commodities but instead redistribute to the profits of commodity producing multinationals), but unless higher energy prices are known to be temporary there is no reason to permanently cushion that impact for all workers, and good reasons why they shouldn’t.

In these circumstances, suggesting all workers should aim to get nominal wage rises that match the level of inflation is unrealistic, as most will not. Attempts to do so will just risk recreating what happened after the 1970s: very high interest rates and a recession. Equally now is not the time for firms to attempt to generate large increases in profits, because this too invites a reaction from central banks. But the first is not a cure for the second, except insofar as a recession hits profits as well as workers. [1] (As the postscript to this post points out, larger than average real wage cuts imposed by governments on public sector workers are a completely different issue.)

Some of the dislike on the left for independent central banks is because the cure to excess inflation often involves an increase in the number of people losing their jobs. But this has little to do with central banks per se, and represents a more general dislike of using demand management to control inflation, whether it’s through interest rates via an independent central bank or a government using fiscal or interest rate policy. The 1970s in the UK in particular represented a prolonged experiment in attempting to control inflation without imposing the costs of higher unemployment, and instead using a mixture of wage and price controls and deals between governments and trade unions. The result of this experiment was clear – it failed.

There is a more nuanced criticism of independent central banks with low inflation targets, which is that they replace the inflationary bias of the 1970s with a deflationary bias. This is the line Tooze takes, although I think it needs pinning down more precisely than he does in the article. We have no clear evidence of deflationary bias in the 1990s or early 2000s. In the UK, for example, underlying growth was steady at similar levels to the 1950s, 60s, 70s and 80s. There is no reason why, in normal times, controlling inflation should be deflationary, and no good evidence that it generally is.

However it may well be the case that central banks, given the history of the 1970s, overreact to similar external shocks to those that happened then. David Blanchflower has rightly argued that the Bank of England was too focused on raising rates following higher commodity prices in the second half of the 2000s to notice the impact the Global Financial Crisis was having. The ECB raised rates in 2011 when commodity prices started rising after crashing during the GFC, and the Bank of England nearly did the same. Some might argue that central banks are overreacting now because the dangers of a wage-price spiral are much less than in the 1970s.

I noted earlier that one reason why the left wants to question the image of the 1970s pushed by the right is because the 1980s saw the beginning of the neoliberal hegemony. In particular, it saw the start of a decline in trade unionism in both the UK and US. In addition, and whether it was a factor behind decline is not obvious, these neoliberal governments substantially reduced trade union power. 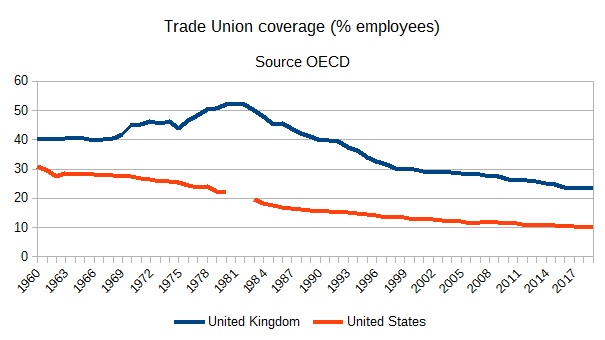 But if it is the case that we are less likely to get a wage-price spiral leading to a severe recession today because unions are less powerful, isn’t that a good thing? There's an apparent dilemma here which many on the left are reluctant to face. The dilemma is that there is an inherent power imbalance between employee and employer in most workplaces and trade unions are important in redressing that imbalance. But is it possible to have strong unions without also generating wage price spirals following commodity price hikes?

International experience suggests the answer may be yes. While trade union density has declined in many countries in a similar fashion to the US and UK, in others it has not. 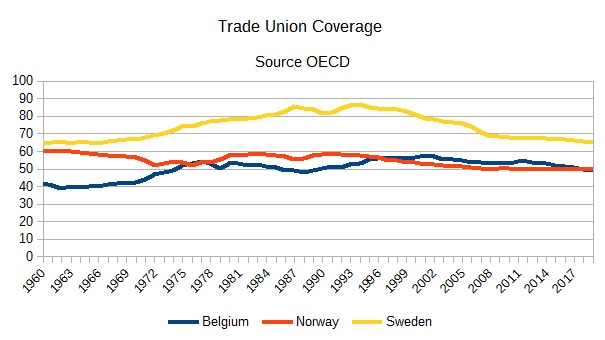 Will these countries suffer a worse wage price spiral, and therefore recession, than elsewhere because of greater union coverage? If not, then the link between widespread unionisation and the high inflation of the 1970s is less clear cut than many on the right (and some econmists) like to suggest. There is no dilemma if it is possible to have strong unions that also recognise when real wages have to fall following higher commodity prices.

[1] This is why central bankers who extol wage restraint without also pushing profit restraint should know better. In the current context both are inflationary, and the only cure central bankers have for either is the same: higher interest rates and a decline in economic activity. There may also be more medium term concerns about rising mark-ups that are possible because of monopoly or monopsony power in particular sectors, but there are plenty of medium term remedies available to governments to deal with those, like encouraging competition (in the UK’s case, reversing Brexit), better regulation and a stronger antitrust policy.

[2] There is a stronger case against separating monetary and fiscal policy, which is that it facilitates austerity. I make that case here, although as I argue here even that strong case ultimately fails.