Forecasting which political party will win the next election three or more years out, much like economic forecasts of what growth or inflation will be in two years’ time, is setting yourself up to fail [1]. But learning from errors can still be useful. Only a year and a half ago, I wrote a long post entitled “As things stand, the chances of defeating Johnson at the next election are minuscule”. It was full of analysis about why Johnson had won in 2019, about how Labour would have to appeal to social conservatives to win and how difficult that would be without, at least, some form of progressive alliance.

I stand by that analysis, and indeed by being friendlier to the Liberal Democrats and social conservatives Labour have gone down the route I suggested they needed to do (given a FPTP electoral system). [2] However the title of that post now looks embarrassing, with Johnson forced out and the polls suggesting an overall majority for Labour if an election was held today.

I made two big mistakes in that post. The first was not anticipating a global cost of living crisis. I did expect the V shaped recovery we got. What I didn’t foresee (along with pretty well everyone else) was the extent of commodity price increases that this global recovery would bring, now exacerbated by Putin’s war against Ukraine. It was clear from the analysis in that article that a Labour opposition would do better fighting on economic rather than social terrain when economic events were not being helpful to the government.

The second mistake is what I want to focus on in this post. What I missed was the ability of a plutocratic populist right of the Johnson/Trump ilk to self-destruct through overconfidence. In mitigation I began to suspect my mistake just three months later, when I wrote a post entitled “Will the Trump/Johnson base lead to its destruction?”.

In the US Trump and large parts of the Republican party, by pandering to their base through denying the severity of the attack on Congress and elsewhere, were alienating everyone else. In the UK the political right’s obsession with wokeness was winning them few votes. But I made a mistake in that second post too. What I got wrong was that the growing distance between Johnson (and Conservatives generally) and expert opinion on the pandemic would also be an own goal. It was in medical terms, but politically I underestimated how much most people wanted to believe the pandemic was over.

However it was another part of Johnson’s attitude towards the pandemic that would confirm the idea of the plutocratic right’s ability to self-destruct. What still seems extraordinary about No.10 breaking their own rules by holding parties is that they thought they could get away with it. People tend to focus on Johnson’s own belief that he was above the rules, but more surprising was that the very people giving political advice to Johnson were taking actions that would not only lead to his growing unpopularity, but ultimately would cost him his job. I suspect that can only come from overconfidence, encouraged by a large majority and a largely biased or tame media.

Since then other developments on both sides of the Atlantic have confirmed the ‘self-harm through overconfidence’ idea. In the US we had the Supreme Court overturning Roe vs Wade. Of course the SCOTUS is not supposed to be political, but the Republican majority on it certainly are. As I speculated at the time, doing this before Republicans had taken back either Congress or the Presidency risked bringing out the Democrat vote, and the polls so far suggest that might happen.

In the UK we have the more recent events of Truss winning the leadership and her Chancellor’s ill-fated budget. As I noted here, as has Chris Grey at greater length, it was the most right wing, pro-Brexit MPs that got Truss onto the party members ballot for leader. Letting party members choose the party leader will not inevitably lead to the selection of a politician who is far better at pleasing party members than the wider electorate, but it does seem that is more likely to happen the more recently that party has been in power. That Truss and Kwarteng thought they could get away with an unfunded budget that cut taxes for the better off when most people are finding it harder to make ends meet suggests self-destructive overconfidence.

In an Annex to that original post, I included a diagram from the Financial Times of where the majority of voters from different parties were clustered in the space of their economic and social views. It was designed to show how the Conservatives had been so successful in 2019 by attracting the votes of many left wing social conservatives through the means of ‘getting Brexit done’. Thankfully John Burn-Murdoch has recently updated the diagram, shifting the economic axes to allow for the election of Truss. 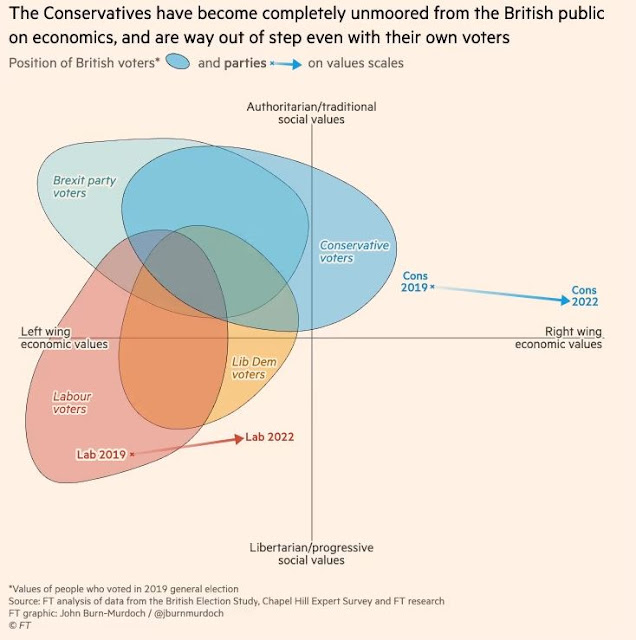 Conservative MPs may be attracted to the idea of lower taxes and public spending, but as I noted here this puts them to the right of not only most voters, but also Conservative voters and even party members. This is the main reason why both Conservatives and Republicans prefer to fight elections on ‘culture war’ issues. Johnson understood that, which is why he was prepared to raise taxes and some areas of public spending. [3] [4]

Truss and Kwarteng with their budget not only made this gulf between Conservative MPs and voters explicit, but it was probably to the right of where most Conservative MPs dared to go. This is the core analysis behind why Truss and the Conservatives are now so unpopular.[5] And if you are going to advertise your small state, help the rich ambitions, the time not to do it is when everyone is being hit by higher energy and food prices after a decade of stagnation.

However, with over two years to go before an election, there is time for the Conservatives to claw back some support. The likelihood is that 2024 will see much lower inflation and interest rates. In addition, it’s possible we may see lower energy prices and a recovery in the economy. But the economy had been reasonably healthy for some years before 1997, and the Conservatives still lost. [6] The big worry for the Conservatives must be that Truss and those around her seem intent on doing many of the stupid things she promised party members in the summer, and yet more things that are just politically dumb. Yet their biggest fear must be that she seems unwilling or unable to bend her policies and those of her cabinet of like-minded loyalists to the very different views of the vast majority of voters.

[3] Osborne got away with austerity because he reframed it after the Global Financial Crisis as an issue of responsible budgeting rather than the desire for a smaller state.

[4] If it hadn’t been for the pandemic, this strategy might have worked for Johnson. Unfortunately, even without the parties, Johnson’s wish to ‘live with Covid’ (in practice doing almost nothing to prevent infection once the country was vaccinated) meant there was a step up in the demand for NHS services to treat those with Covid, with no corresponding step-up in resources to do so. Thus a large increase in NHS spending, paid for by higher national insurance contributions, turned out to be completely inadequate, leading to ever growing waiting lists for treatment.

[5] Unfortunately for Truss there is more besides. The market reaction to the budget shattered what remained of the Conservatives erroneous reputation for economic competence, much as Black Wednesday had done before.

[6] In contrast, growth (in wages as well as the economy) did help Cameron to victory in 2015. However, it is easy to think of many reasons why the Major loss is a better analogy than Cameron’s victory.