In an earlier post I celebrated the announcement that the US Federal Reserve intended to publish interest rate forecasts. It has now done so. Here is the key chart. 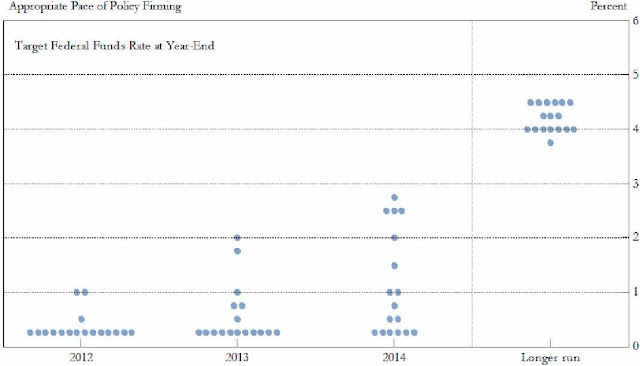 The vertical axis in the level of expected interest rates. On the horizontal axis we have four points in time: the end of 2012, 2013, 2014 and the long run. Each dot represents the expectation of one of the FOMC members (roughly the equivalent of members of the Monetary Policy Committee in the UK).
This tells us some important information that could only be guessed at beforehand. The majority of FOMC members expect interest rates to stay at almost zero for the next two years. Every member of the FOMC expects interest rates to be below their long run level (i.e. they expect monetary policy to be expansionary) in three years time. (We know it is expansionary because we also have FOMC inflation forecasts, so we can work out what real interest rates will be.) Now these forecasts are not necessarily better than others, but that is not the point. What they tell us is what these individuals are likely to decide to do if events (inflation, growth etc) turn out as they expect, and if they are being consistent. (More formally, this makes it easier for a central bank to demonstrate its credibility in the face of potential time inconsistency: see my earlier post for an example of what this means.)
The Federal Reserve example also weakens two of the standard arguments against the Bank of England doing the same. The first argument is how you get all the MPC members to agree a forecast. As the above shows, you do not. Each member of the MPC says what they think. The second argument is that the public will confuse conditional forecasts with commitments. However, unless every MPC member has the same forecast (which seems unlikely), what you get is alternative opinions, so clearly this is not some kind of unconditional target for interest rates.
The central bank of New Zealand has been doing this for years, and those of Sweden and Norway for some time now. Those central banks have not decided it was a horrible mistake because the public did not understand what it was doing. However, these were relatively small economies, so the Bank of England could brush their experience to one side. Now that the US has followed in their footsteps, I believe the Bank has to move in the same direction.
Posted by Mainly Macro at 17:02