David Cameron was on the BBC this morning talking about the excesses of executive pay. What I liked about what he said was his clear identification of the problem as market failure. We do not hear this phrase enough in public discourse – indeed the BBC in the linked report puts market failure in quotes! It was good to hear a Conservative Prime Minister saying it too. (Perhaps having a PPE degree helped!)
I remember naively saying after the credit crunch that at least it would put an end to the idea that markets always work, and that regulation was always unnecessary. We would instead, I hoped, have a more intelligent discussion that acknowledged market failures and focused on the best ways of dealing with them. That did not seem to happen. In part that is because the right wing think tanks that are paid to spin the ‘markets always know best/state intervention is always bad’ line carried on getting their funding. But what should have happened is that this line lost credibility because someone would immediately reply with the knock out ‘you mean like financial markets’. I’m not quite sure why this didn’t happen.
Whether the measures the government is due to announce will have any impact on executive pay is another matter. The Prime Minister talked about transparency, and shareholder power. I'm not sure strengthening either will have much impact. This is because it remains unclear exactly what the source of market failure is, and why it should have become so much more important in the last few decades. (Or perhaps the market failure was always there, and the other forces that used to restrain excessive executive pay have withered.) A key piece of evidence is that these trends have differed a lot among countries, as this wonderful database indicates. (Executive pay and the 0.1% share are not the same thing, but Atkinson, Anthony B., Thomas Piketty, and Emmanuel Saez. 2011. "Top Incomes in the Long Run of History." Journal of Economic Literature, 49(1): 3–71. suggest the former is a major cause of the recent increase in the latter.) Although this paper is full of ideas that could help explain the trends shown below, we are a long way from a comprehensive account. 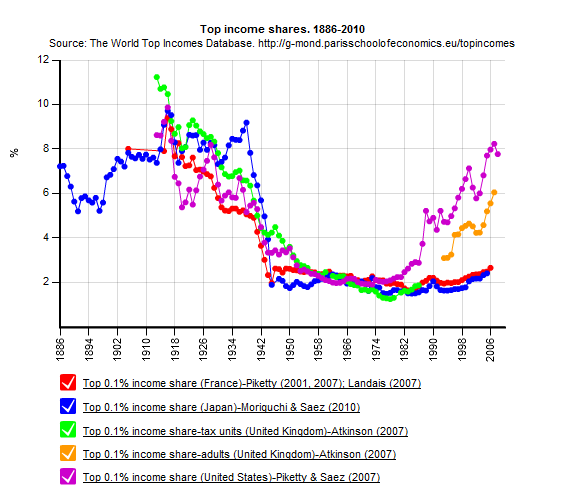