Maybe not the most compelling title for a post, but the news that Lars Svensson is not renewing his term as Deputy Governor of Sweden’s central bank (HT Saroj Bhattarai) will be of great interest to academic macroeconomists. What I want to suggest here is that it should also be of wider interest.


Apart from making major contributions to the discipline, Svensson has also been extremely influential among policymakers, and is often associated with the idea of flexible inflation targeting. (Here is just one example.) It is interesting news because of why he is leaving. He says: "I have failed to find support for a monetary policy that I believe would lead to better performance, with both a higher inflation rate closer to the target of two percent and a lower unemployment rate." He has for some time been fighting a losing battle to persuade his colleagues that current Swedish monetary policy is too deflationary (see for example Britmouse), and he has decided to give up the fight.

Interest rates in Sweden are low, at 1%, but according to Svensson they should have got there faster and should now be even lower. Here is a plot of inflation (blue, left hand scale) and unemployment. 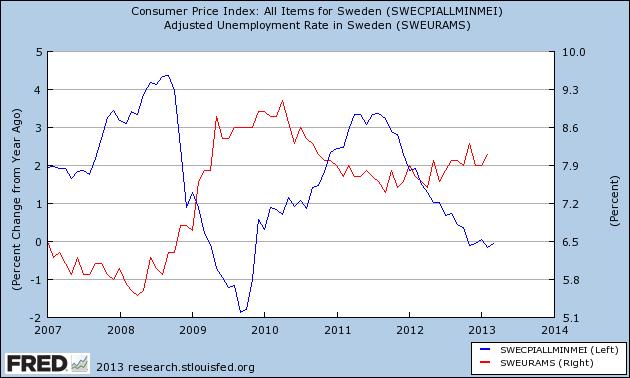 Inflation is currently zero, so well below the 2% target. GDP growth was 1.2% last year. Unemployment rose in the recession, came down a bit, but has begun to rise again. The case for lower interest rates over the last two or more years looks pretty clear.

So why have most of Svensson’s colleagues not been following his advice? Their concern is that low interest rates are encouraging Swedes to borrow too much. Now of course one of the ways monetary stimulus is supposed to work is that it encourages more borrowing, but the worry is that borrowing in Sweden is dangerously high, and could threaten financial stability. There are echoes here of doubts expressed by some members of the Fed (see here and here) and international organisations (Tim Taylor here). However so far these have been just concerns, which do not seem to have had a major impact in preventing expansionary policy. Except in Sweden.

Svensson’s arguments against such concerns are persuasive (pdf), and I find the argument that there are better financial instruments available to deal with these problems particularly strong. However I want to draw a slightly different parallel, with policy at the ECB. At first sight similarities appear slight: although both central banks are resisting a cut in interest rates from low to very low levels, in the Eurozone growth is negative rather than just slow, and inflation is currently only a little below target rather than zero (although the ECB itself expects it to fall to nearly 1%). In addition, the ECB has not focused on financial stability as a reason for not cutting rates. Yet the parallel is this. In both cases we have central banks making decisions that appear to contradict the wisdom of mainstream macroeconomics. So what, you may say, but in both cases the cost is being measured in unnecessary unemployment, and below target inflation. Compute the cost in terms of lost output, and they are the kind of losses that could cost a politician their job. The cost in terms of human misery is greater still. You may be pretty skeptical of the wisdom of macroeconomists, but do you really think that these central bankers know better?
Posted by Mainly Macro at 17:50