Confusing levels and rates of growth

It was entirely predictable. Once growth returned to the UK economy, those with a political axe to grind, but also some who do not, and even some who should know better (uneconomical has a good detailed response), will start saying that any aggregate demand problems have gone away. The simplest argument suggesting otherwise is NIESR’s well known chart, the latest version of which is reproduced below. 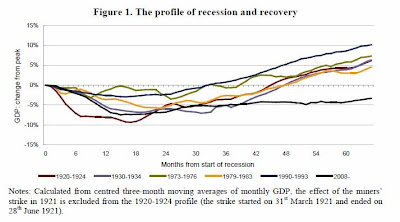 Of course this does not prove that the UK still has an aggregate demand problem. Perhaps something unprecedented has happened to UK supply over the last five years. After all, consumer price inflation (CPI) is still above target. Well, as I pointed out here, CPI was above target in 2008, and 2009, and 2010 ….. so unless you want to suggest that the UK never had an aggregate demand problem, the behaviour of the CPI today is not very reliable evidence.

The main point, however, is that aggregate demand problems are about the level of GDP, not its rate of growth. In a demand induced recession, aggregate demand will fall: consumers start saving more; firms reduce the level of investment etc. As a result, resources are underutilised, the clearest indication of which is an increase in unemployment. We start a recovery when aggregate demand starts rising again at a rate that exceeds the rate of growth of underlying supply (labour force growth and technical progress). That might have just started in the UK.  GDP growth in the last quarter was 2.4% at an annual rate, which if you were pessimistic might be above trend. The chart shows the recovery started in 2010 but then stopped, but better late than never.

However that is just the start of a recovery. As the chart again shows, we should really be looking for rates of GDP growth of 4% or more if we are going to start utilising those resources which are currently being wasted (i.e. if we want to reduce unemployment). The aggregate demand problem only disappears when those resources are utilised again, and unemployment goes back to its non-inflationary rate (NAIRU). (And no, CPI inflation does not tell us that has already happened - average earnings are increasing at rates well below CPI inflation, which strongly suggests unemployment is well above the NAIRU.) As yet, falls in UK unemployment have been tiny relative to the increase that occurred during the recession.

The reason why this is so important is that it may be too easy to settle into a political equilibrium, where the economy is growing roughly at trend, but unemployment is not falling. It is a political equilibrium because the unemployed have very little political voice, and sections of the media encourage politicians (I’m being as polite as I can here) to label the unemployed as workshy. This may not have happened in the US since the war, but with fiscal policy being tightened as a result of Tea Party fundamentalism it could well do this time. In the UK there are some similarities with the 1980s, when unemployment stayed above 10% until near the end of that decade. Luckily no one in the UK has started arguing that current levels of unemployment are ‘structural’, but given the rhetoric about strivers vs skivers it will not be long before they do, and of course if you wait long enough to reduce unemployment you are in great danger of creating a structural problem.

So we will stop having an aggregate demand problem when unemployment falls to near pre-recession levels, and (assuming rational monetary policy) nominal interest rates start rising significantly. It would be great if that happened very quickly because of rapid growth, and while I can think of reasons why that might be unlikely, I know enough about forecasting to know it is also quite possible. However that will have no impact on the costs of austerity that have already been incurred, which is why I wrote my ‘final verdict’ on the current Chancellor six months ago.

Even earlier, over a year ago, I wrote this: “come 2015, the spin “we have done the hard work and the strategy has worked” will accord with (relatively) strong growth, while talk of output gaps and lost capacity will have less resonance. True, unemployment will still be high, but not many of the unemployed are Conservative voters, and the immunising spin about lack of willingness to work can be quite effective.” Paul Krugman described this post as ‘remarkably cynical’. I fear it will be one of my better forecasts.
Posted by Mainly Macro at 14:45