This is my own take on the idea of expectations driven liquidity traps (as opposed to liquidity traps where the natural real interest rate is low and unobtainable). I note some of the literature that has promoted these thoughts at the end, but I am not trying to summarise what these papers actually say, but rather to give my own thinking on how such a trap could arise. The usual health warning on such occasions applies: if you think I have got something wrong, or missed something important from the literature, please let me know.

Consider the diagram below, which represents the simplest possible model. Real interest rates are always constant, which is the 45 degree line. Monetary policy follows the Taylor principle, but nominal rates cannot go below zero, so the bold monetary policy line kinks. There is one ‘locally stable’ equilibrium at the inflation target (let us call that the ‘intended’ equilibrium), and one ‘indeterminate’ equilibrium when we are at the ZLB (which involves negative inflation). 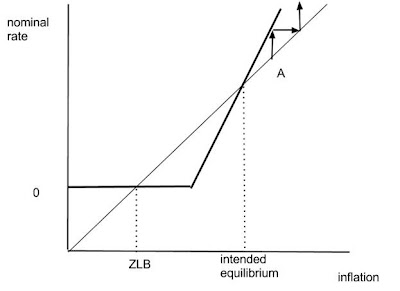 It is often said that the intended equilibrium is ‘globally unstable’. (Michael Woodford in Interest and Prices  - page 123 onwards - talks about global ‘multiplicity of equilibria’.) By this is meant that, in the absence of imposing an endpoint constraint that has to be met, there are infinitely many rational expectations solutions to the model, many of which involve inflation exploding. I trace one: if we start at A, the monetary authority raises nominal interest rates, but for constant real rates that must mean that expected inflation next period is even higher etc etc.

John Cochrane says: “Transversality conditions can rule out real explosions, but not nominal explosions.” As a result, he suggests, we cannot rule out travelling along this unstable path. After all, hyperinflations do occur. I am less worried about this. Hyperinflations occur when monetary policy makes no attempt to stabilise inflation. Here we have a model where everyone understands it does, so it makes sense to impose an endpoint on any dynamic path.

Note that we cannot just say - suppose we start at A, as if history put us there. History does not put us there: in this forward looking model history is irrelevant. Given the Taylor principle, there are only two reasons we could be at A within the context of this model: agents get the real interest rate wrong, or the inflation target wrong. Once we allow beliefs to be revised, it seems inconceivable that hyperinflations would occur within the context of this model.

In looking at how beliefs change we are applying a simple notion of learning. The fact that learning helps stabilise inflation around the intended steady state should not be surprising, because what we are in effect doing is adding some backward dynamics into the model. A locally stable steady state with forward looking dynamics will tend to flip to a stable steady state with backward dynamics. This property is helpful, because we probably do not know the mixture of backward and forward looking dynamics we have in the real world, so it is good that policies should be robust to this.

A consumer has to eventually get on to their stable saddlepath because it is stupid for them to accumulate infinite wealth and stupid for others to carry on lending them more and more (no Ponzi games). But things in this model are not so very different - all we are saying here is that we are working with a model in which we rule out hyperinflation because that is a stupid thing for central banks to allow. But unlike the consumer case, it is not impossible that central banks could allow it, which is why we sometimes see hyperinflation. [2]

If we start off with inflation below the inflation target, then we can apply a symmetrical argument. Nominal interest rates will fall. This is inconsistent with agents’ beliefs, so if they revise these beliefs it seems likely that inflation will rise rather than carry on falling. But suppose they do not revise their beliefs. In that case we do not shoot off to hyper negative inflation. This path will converge on the ZLB steady state. This steady state is not ‘locally stable’, but ‘indeterminate’.

To put this point another way, recall that in this purely forward looking model history is irrelevant. We cannot say ‘history means we start somewhere, and then we converge to the indeterminate steady state’. Now incorrect beliefs could start us anywhere, but beliefs are not completely independent of the model and subsequent dynamic paths. All along the approach to the ZLB equilibrium, events are contradicting those initial beliefs.

However, it may be as unrealistic to assume beliefs are continually revised as it is to assume they are never revised. Suppose beliefs are not revised for some time, and the initial belief involves an inflation target which is below the actual target. Inflation is below target, which leads to interest rates falling, which if real rates are constant implies still lower inflation next period. If beliefs do not get revised, we do not go to hyper disinflation, but to the ZLB steady state. Suppose agents only revise their beliefs once they get close to the ZLB steady state. What will happen then?

Recall that originally agents thought that the inflation target was a bit below the actual target (1% rather than 2%, say). Inflation has now fallen much further (to -3%, say). Is it possible that they might conclude that they originally overestimated the true inflation target? If they ignored the fact that the ZLB is a constraint, they might decide that current stability implied that the inflation target was -3%. The central bank cannot demonstrate that this is incorrect by lowering nominal rates, because of the ZLB. This is why this situation is very different from the hyperinflation case.

In a model this simple, we have stretched credibility a bit to get us to a point where we stay at the ZLB steady state. Agents ignore all the observations on the path towards that position, each of which was inconsistent with a -3% inflation target. But if you add in additional uncertainty, allowing the real interest rate to temporarily change for example, things get more complicated. Agents could interpret falling nominal rates when inflation was 1% as being due to temporarily lower real interest rates.

So for a time, at least, we could stay at the ZLB steady state because of ‘self-fulfilling’ but mistaken expectations. If we allow real interest rates to change, then at some point real interest rates will rise and agents will recognise this. Instead of nominal rates rising (as they should if the inflation target was -3%), they will stay at zero, which should make agents revise their belief about the inflation target. So the ZLB steady state remains transitory. But we could stay stuck in the ZLB steady state because of mistaken beliefs for some time: for as long as beliefs remain unchanged or no information arrives that makes them change.

Does this story of an expectation driven liquidity trap fit the evidence better than stories based on an unobtainable negative natural real rate? Or is it instead just a cute (‘liberating’) theoretical construct with zero application. I think it is difficult to argue that something like this applies today to countries like the US or UK. Expectations of inflation are still positive, and central bank inflation targets are clearly positive and pretty credible. (The concept of pessimistic beliefs, or animal spirits, might well be more applicable in the context of other models with different unobservable variables.)

However, if we take the idea seriously at all, it does suggest that one-sided inflation targets are dangerous. Central banks that have a target of 2% or less invite speculation that they would settle for zero inflation if that came around, which would make falling into an expectations driven liquidity trap that much easier. Perhaps the major economy where the central bank’s intentions towards inflation have been least clear, and therefore the potential for an expectations driven liquidity trap greatest, has been (until very recently) Japan.

[1] With asset market bubbles, we can get the rather interesting possibility that we continue to travel along the explosive path, not because expectations of the fundamentals are wrong, but because agents think they can make money along that path but get out before the bubble bursts. However, this does not seem to apply to inflation and monetary policy.

[2] Of course it is not completely impossible that some people are misers or get away with Ponzi schemes, which illustrates the point that the difference in rationale for imposing end point conditions in each case is not that great.