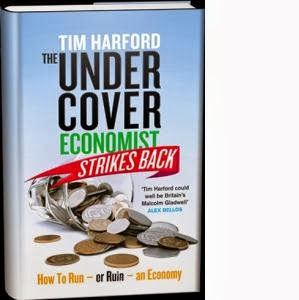 Let me first deal with a potential conflict of interest. Tim has a wide twitter following, and quite often tweets a reference to my blog posts. This might lay me open to the charge that I would be inclined to favourably review his new book to return this favour. Actually it has the opposite implication. The fact that he finds my blog interesting simply shows he appreciates good macroeconomics, which is just as well for someone who has just written a book about the subject. What it does mean is that if I had found anything in his book which I had clearly shown to be fallacious in one of my posts, I would be doubly disappointed.

A difficult hurdle to pass, that. I suspect the only person who could write a book that agreed with everything in your blog is yourself, and even you might find that difficult

Ah, that reminds me of the second thing I should say at the start. The book employs the dialogue format that Tim uses in his FT columns so well. This is more unusual in a book and might potentially bother some, although most of the time it is used much more sparingly than in the columns. Otherwise it is written in just the same style that makes his other books so readable.

Yes, but microeconomics and the other subjects he has written about before are potentially interesting. This book is all about macroeconomics: yawn, yawn.

Indeed. Up until now it was unclear whether it was possible to write a general explanatory (rather than specifically topical) book on macro that did not have the eyelids dropping after a few chapters, or which began to stretch the reader quite quickly. Given Tim’s ability to write about economics in an engaging way, with this book he could settle the matter one way or another. Now in one sense I’m probably not the best judge, given my prior knowledge, but it seems to me Tim has pulled it off.

Oh come on. How can you make understanding Keynesian economics enjoyable?

With a mixture of stories about economists of the past, and lots of useful analogies and examples. So, not surprisingly, Bill Phillips and his machine play a major role, as do shortages of ‘money’ in baby sitting circles and Iphones when discussing price stickiness. Some I knew about, but others (like Henry Ford’s application of efficiency wages) I had forgotten about.

But I bet it is highly selective in the stuff it covers. All the juicy topical issues, but nothing on RBC models or how you measure GDP.

Actually no. Chapter 11 is all about measuring GDP, and it beats most treatments you will find in the textbooks hands down. The Lucas critique, and how that changed the way macroeconomists use evidence, is there. The importance of commitment is illustrated with quotes from the film Dr. Strangelove. That allows him to cover not just how commitment can help, but also when it goes wrong. Let me quote: “That is the problem with commitment devices: if something goes unexpected wrong and a crisis happens anyway, the commitment device guarantees that it will escalate into Armageddon. Unfortunately we have an important parallel in economics: it is called the Eurozone.”

Which means Tim is not afraid to occasionally call it how he sees it. For example you will find the equivalent of the standard discussion of the optimal rate of inflation early on, but Tim makes it pretty clear he thinks raising inflation targets above 2% would be a good idea. You will also not find any equations in this book, but it does cover much of the same ground as a textbook.

Is that so surprising? Tim wants to discuss the material that will enable readers to understand the big macro issues of the day, and I’ve always argued that textbook macro does a pretty good job of doing that (although with a few obvious gaps). But you will also find some things here that would not normally be in a macro textbook. There is a chapter of management, for example, drawing on the work of Bloom, van Reenen and others. There is a chapter on happiness, and one on inequality. Finally Tim has the advantage of not being part of the macro tribe, which he argues has become far too insular and narrow in the last forty years. So he can maintain a healthy critical perspective. Here is one example. “Robert Shiller told me that while the microeconomists would show up to argue when he gave seminars on behavioural finance, the macroeconomists just haven’t showed up at all.”

Which means macroeconomists will not be adopting this book as their set text then!

That is not the market he is aiming for. It is ideal for the interested non-economist who wants to understand something of macroeconomics in an easy and enjoyable way. However I also think it is a great supplement to the textbooks for students. All too often, students reading textbooks focus on the formalism, and fail to understand the key concepts, or relate them to the real world. Tim’s book is an excellent antidote to that. And last but not least, it provides a wealth of material  for academics to make those lectures much more fun for students.

So it’s both thumbs up from you then

Absolutely, although I’m still not sure about that dialogue style.