What is wrong with the USA?

A lot of US blog posts have asked this after the US government came very close to self-inflicted default. It was indeed an extraordinary episode which indicates that something is very wrong. All I want to suggest here is that it may help to put this discussion in a global context. What has happened in the US has of course many elements which can only be fully understood in the domestic context and given US history, like the enduring influence of race, or cultural wars. But with other, more economic, elements it may be more accurate to describe the US as leading the way, with other countries following.

Jared Bernstein writes “The US economy has left large swaths of people behind.  History shows that such periods are ripe for demagogues, and here again, deep pockets buy not only the policy set that protects them, but the “think tanks,” research results, and media presence that foments the polarization that insulates them further.” Support for the right in the US does appear to be correlated with low incomes and low human capital. Yet while growing inequality may be most noticeable in the US, but it is not unique to it, as the chart below from the Paris School of Economics database shows. Stagnation of median wages may have been evident for longer in the US, but the recession has led to declining real wages in many other countries. Partly as a result, we have seen ‘farther right’ parties gaining popularity across Europe in recent years. 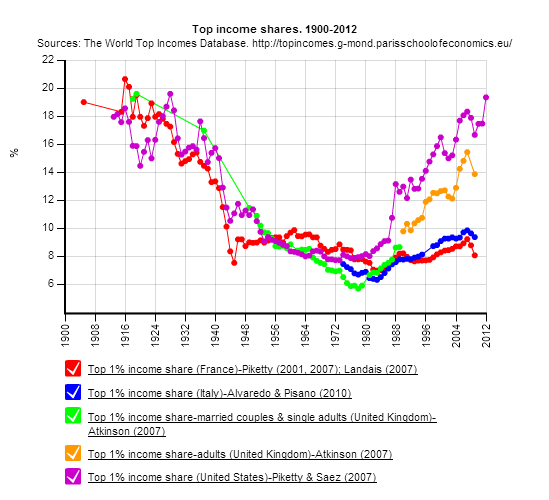 Yet surely, you might say, what is unique to the US is that a large section of the political right has got ‘out of control’, such that it has done significant harm to the economy and almost did much more. If, following Jurek Martin in the FT, we describe business interests as ‘big money’, then it appears as if the Republican party has been acting against big money. Here there may be a parallel with the UK which could be instructive.

In the UK, David Cameron has been forced to concede a referendum on continued UK membership of the European Union, in an attempt to stem the popularity of the UK Independence Party. Much of UK business would regard leaving the EU as disastrous, so Cameron will almost certainly recommend staying in the EU. But with a fiercely anti-EU press, and a divided party, he could well lose a referendum. So the referendum pledge seems like a forced concession to the farther right that entails considerable risks. Chris Dillow notes other areas where a right wing government appears to be acting against ‘big money’.

While hostility to immigration has always been a reaction to economic decline, it is difficult to argue that hostility to the European Union is a burning issue for the majority of people in the UK. So why was Cameron forced to make such a dangerous concession over the referendum? One important factor is that the EU is a very important issue for all of the right wing press, which is universally antagonistic in its reporting. Murdoch’s hostility is well documented, which suggests the press is leading rather than reflecting popular mistrust. So while a right wing press is generally useful to the Conservative Party, in this particular case it seems to be pushing it in a direction ’big money’ does not want to go.

Most discussion of the Tea Party seems to view Fox News and talk radio as simply a mirror to a phenomenon that must be explained. However in the case of the EU and the UK press it seems causality runs the other way: it is the press that helps fire up the passion of a minority and the attitudes of a wider majority. When I see lists of influential people within the Republican Party, names like Rush Limbaugh, Matt Drudge and Glenn Beck seem to figure prominently. Perhaps in both the US and UK, ‘big money’ and those on the centre right need to ask themselves whether - in enabling and encouraging a highly partisan and emotive media - they have helped create something they can no longer control.


I would not normally bother with responses to my post like this, but Mr. Bourne has a line which might for a fleeting moment sound convincing. He says that my post insults eurosceptics like him, because by suggesting that the influence of the press is strong on this issue, I must be assuming that he, other eurosceptics and perhaps all the British people are stupid. (It also shows I despise democracy and the nation state, apparently, but let’s ignore that.) This struck me as odd, because I can be pretty eurosceptic at times, so I must be insulting myself!

This is nonsense, because it confuses intelligence with information. People’s views are influenced by the information they receive (mine certainly are), and therefore it is important that this is not one sided. My concern with much of the UK press is that on many issues people are getting very distorted information. Now Mr. Bourne thinks that in worrying about that, I am implying that people are stupid. But wait a minute. Mr. Bourne’s employer, the CPS, recently released a report criticising the BBC for bias. If they think that is important, and they seem to, does that not mean they also think people are stupid?

I suspect Mr Bourne chose to be insulted so he could have a good old eurosceptic rant. Which is fine, but please do not make completely unjustified assertions about what my views are at the same time. That is insulting.