Why I am obsessed by austerity

Chris Giles of the FT says about the austerity debate:

“What is important is that all this gnashing of teeth is beside the point. The numbers are small. For example, let us have faith in Profs Jordà and Taylor’s estimate for a moment. Output is 18 per cent below the 1997-2008 trend, so the effect found by these academics represents a sixth of the total. Is 3 per cent still not large? No.”

This is right in one sense, but wrong in four. If the aim is to explain why UK output is so far below trend, then looking at fiscal policy is not going to get us very far. We need to look elsewhere: maybe at why consumers are saving so much more than they used to, or why UK productivity has fallen so far. Yet, although I have written posts about these things, I have written much more about fiscal policy. Why?

Or instead, let’s take the more conservative estimates recently provided by the OBR in the nice chart below. Jonathan Portes has already discussed the paper from which this comes, so let me just explain the colours and dig out the numbers. This looks at the impact of discretionary fiscal policy (changes the Chancellor actually makes) in successive years. The blue bar in 2009/10 shows the expansionary impact of the Labour government’s attempts to moderate the recession, which had a continuing positive impact (according to the OBR’s calculations) in subsequent years. But in 2010/11 this was outweighed by fiscal tightening in that year (light brown), some of which was already planned by Labour, but which the coalition added to. And so on. So if you add the light brown, green, red and yellow areas, you get the total impact of fiscal tightening on output from 2010-13, which is a bit above 5% of GDP. Not as high as 6%, but still an awful lot of money. And the cost goes on, as the chart shows. Now is not the time to get into detail about how these numbers are estimated. In particular, they are ‘expectations naive’, in that they assume policy has no impact when it is announced, but only when it happens. But however you estimate the numbers, any reasonable evidence based estimate is going to have the same order of magnitude – it is always going to be a huge economic cost. And that is not counting additional costs, in terms of the distribution of income, or the lasting damage of long term unemployment, or health. 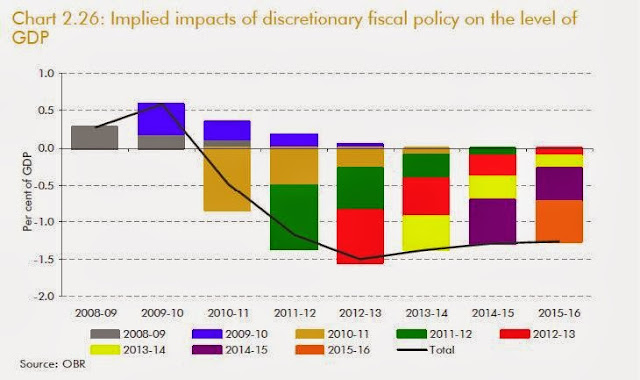 The second point is that this was something where the government had a choice. Most of the time GDP changes for reasons that governments have very little control over, except perhaps in the longer term. If GDP is low because banks, firms and consumers are adjusting their balance sheets, there is very little the government can do to stop them. (Monetary policy can try to discourage them making this adjustment too quickly, but as we know, interest rates cannot go below zero.) But discretionary fiscal policy is, by definition, directly under the government’s control.

Which brings me to the third reason why Chris Giles is wrong. The baseline here should not be ‘doing nothing’. There is nothing that says the best the government could have done was to be fiscally neutral in terms of GDP impact. As we can see, in 2009/10 we had fiscal stimulus, and this could have continued. Now of course there is a debate about how far fiscal stimulus could have gone: would the impact on inflation have been too great, or would the financial markets have panicked in a way that would have been harmful to the economy. But 6%, or 5%, is just the positive harm that government policy has done – it might have instead done some positive good.

The fourth reason why I, and maybe others, might be a little obsessed about austerity is that governments, and regretfully a few economists, have tried to deny that austerity has had any impact at all. The public debate has often been about the sign of these effects rather than their size. When governments appear to ignore or contradict the bread and butter macro that academic economists teach their students, then I believe these academics have every right (and indeed a duty) to get a little hot under the collar.

This is the other reason that I wanted to display this chart. In the past, both the Prime Minister and the Chancellor have been the first to quote the numbers crunched by the OBR when it suited them. So let them be consistent and honest. Why not say that the OBR estimate that their fiscal actions have kept GDP well over 1% lower than it might have been each year since 2011, and that this will continue, but that this is worth it because it prevented a debt crisis (or whatever). And if they will not do that, why cannot journalists quote these OBR numbers when discussing the merits or otherwise of austerity. Then let the people decide whether these numbers really are as small as Chris Giles suggests.