Two observations on the Autumn Statement

I may come back to some of the detailed measures announced in the 2013 Autumn Statement at a later stage, but here I just want to make two points about the overall strategy. The first comes from the OBR’s accompanying forecast. They calculate that government plans imply that “government consumption of goods and services falls from 23.2 per cent of nominal GDP in 2009 to 16.1 per cent by the end of the forecast period, its lowest on record in data back to 1948.” The document mentions this at least three times, perhaps because they find it a little unbelievable. Yet it certainly indicates the scale of George Osborne’s ambitions to shrink the size of the UK state.

This reduction in government spending could allow immediate and large reductions in taxes. However the government wants to bring down debt fast. Here is a nice chart from the Autumn Statement document. 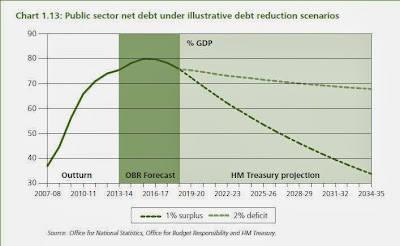 The government’s preferred strategy is to go for something like 1% surpluses, bringing debt back to pre-recession levels by 2034/5. As Chris Dillow also notes, small budget deficits would still bring down debt, but more slowly.

Now let’s imagine that at some stage in the not too distant future the UK recovers much of the enormous amount of ground it has lost since 2007, and interest rates are no longer at their lower bound. At that point aggregate fiscal policy should be all about choosing between paths like these (or, of course, something in between). I think this is a very important debate to have. It would be a tremendous advance if we could have this debate without confusing it with the issue of how large the state should eventually be.

Yet neither this Autumn Statement, nor the speed of the recovery, alters in any way my view that this is not what should govern fiscal decisions today. UK GDP per capita is over 15% below the trend that it has followed since the 1950s. The more fiscal tightening we have, the longer it will take to recoup this lost ground.
Posted by Mainly Macro at 00:33