The big news in the UK over the Christmas period has been flooding caused by heavy rain. The Prime Minister naturally toured some of the worst affected areas, but the reaction he got was not what he might have hoped in terms of media coverage. Was this hostility fair? Here are some facts. (Source (pdf): Flood defences in England, House of Commons Library, SN/SC/5755.) 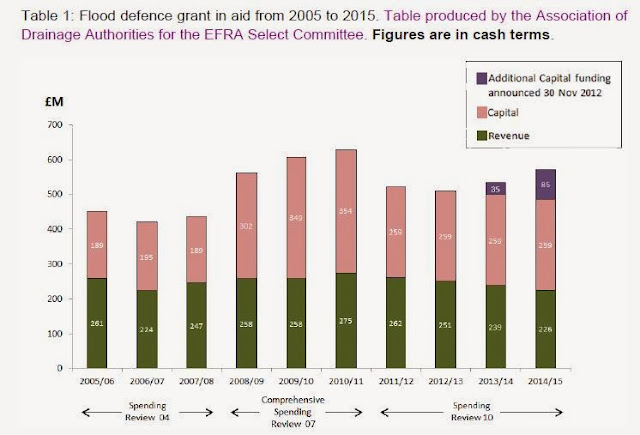 Until 2010, flood defence spending by the government had been steadily increasing: between 1997 and 2010 spending increased by 75% in real terms. There are good reasons why spending should be increasing. One is that climate change is likely to substantially increase the chances of periods of severe rainfall. Flood damage currently costs over £1 billion a year, but the Environment Agency has estimated this figure could rise to £27 billion by 2080.

When the current government came to power, their 2010 comprehensive spending review reduced spending by 20% in real terms, according to the Committee on Climate Change. Following floods in 2012 the government provided a small amount of additional money - shown in purple on the chart. So instead of continuing to raise spending to deal with a growing threat, the government cut back spending as part of their austerity programme.

It is a distraction to try and link specific episodes of flooding to spending cutbacks. These things work on probabilities. It is also a distraction to obsess about whether spending has gone up or down in real terms. The government will claim that spending on ‘frontline’ defences has not fallen because of ‘efficiency savings’ elsewhere and partnerships with local authorities, but the real point is this. The recession presented the government with a huge opportunity, to bring forward the many existing plans to enhance the UK’s flood defences at a time when labour was cheap and borrowing costs very low. They chose not to take advantage of that opportunity, ostensibly because of a potential debt crisis but in reality because of an ideological distaste for public spending. Over the next decade or two, many people will pay the price for that decision, either directly as their homes and businesses are flooded, or indirectly through higher insurance premiums.