The collapse in UK productivity since the recession is extraordinary. Here is a chart from the OBR (pdf), showing how much lower potential output is estimated to be compared to estimates made just 6 years ago. 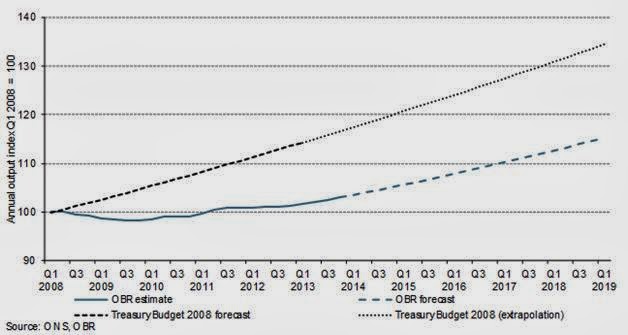 According to the OBR, nearly 14% of output has been permanently lost, because underlying productivity has stopped growing over the last six years. This is unprecedented. As I have shown in earlier posts, UK GDP per capita has shown almost constant trend growth since the Second World War - until now. Not only is this ‘sudden stop’ in productivity unique in recent UK history, it is also a decline that is worse in the UK than almost anywhere else.

In quantitative terms understanding why this has happened dominates everything else as far as the UK macroeconomy is concerned, including the impact of austerity (if the two are unrelated). It should be what is obsessing any UK Chancellor. Yet this is something George Osborne hardly talks about. In his budget speech the word ‘productivity’ does not appear even once.

It is not hard to understand why the Chancellor keeps quiet about this productivity disaster. When growth was non-existent through 2011 and 2012, he liked to point to buoyant employment as an indicator of success, which of course is the obverse of the productivity puzzle. It would be embarrassing for him now to recognise how misleading this was. The Labour opposition’s main attack point concerns falling living standards, which is in large part a result of stagnant productivity, so he would much rather talk about something else.
The fact that this Chancellor thinks this way is not surprising. To quote Tim Harford: “So let us applaud George Osborne for playing his own game well – a game in which economic logic is an irritation, the national interest is a distraction, and party politics is everything.” Yet it should be noted that this kind of attitude can only work in an environment where the government has substantial control over much of the media. I made fun of this here, but it is a serious abrogation of democracy.
All this would matter less if actions revealed some coherent analysis and serious effort to deal with the problem. One widely held theory, championed by the recently appointed Deputy Governor of the Bank of England Ben Broadbent, is that the productivity collapse has something to do with what has happened to the UK’s major banks. This is certainly something LibDem Business Secretary Vince Cable worries about. Yet the government’s attempts to do something in this area, although welcome, have been modest, and these measures have had no noticeable impact on productivity. You would be forgiven for not knowing that the state currently owns a large part of the UK banking sector.

Another possible explanation for the productivity puzzle is subdued investment, and the need for many productivity improvements to be embodied in the form of new capital. The budget did increase investment allowances, doubling the allowance introduced at the end of 2012. But the real question, which I asked back in 2012, is why all this was not done much earlier. It is respectable to believe such measures are ineffective or inefficient, but this budget indicates that is not the Chancellor’s view. So why not introduce these incentives when the recession was at its worst, rather than when growth is recovering? It is just another manifestation of the austerity U turn.

George Osborne’s twin obsessions are winning the next election and reducing the size of the state. However perhaps he should also worry about his legacy. There are two possible verdicts that history will bestow. The first, and more optimistic, is that the OBR is wrong. There will be a long and vigorous recovery such that over the next decade the economy does recover the ground it has lost. The question economic historians will then ask is why the recession lasted so long, and George Osborne’s austerity will be up there as a major explanation. He will be remembered as the Chancellor who helped create the longest recession the UK has ever had. The second possibility is that the OBR is right, and this productivity has been lost forever. In that case historians will search in vain for his analysis of the problem, and mark him down as the Chancellor who presided over a disaster and pretended it was not happening.