When you just know something is true, like fiscal policy never matters much and NGDP targeting would have avoided the Great Recession, everything becomes about proclaiming your faith in the most effective way possible. It becomes a debating contest. The best example I know of someone like this is Scott Sumner. Here is what he had to say about something I wrote recently.

The italics are mine. When you read that someone got the data wrong, or that they claim the data is whatever, you expect to find that they made an excel error, or used old data. But Sumner is not using ‘wrong’ and ‘claim’ in their ordinary sense. He is in debating mode. What he means is that by choosing to use the (correct) annual data, I’m (accidentally, deliberately?) hiding something important. He then quotes two figures that supposedly prove his case. No analysis, no graphs – it’s a debate.

Well here is a graph of US real government consumption expenditure and gross investment, taken from FRED. 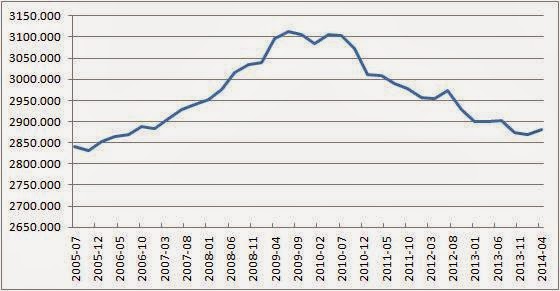 According to Sumner “austerity began on January 1st 2013”. Now look at the graph.

It gets worse. Tyler Cowan quotes from Scott’s post with approval, I guess because the guy shares the faith.

Now do you really want to follow those whose macroeconomics is so faith based that they do not even need to check the numbers? Do you want to follow someone who says (earlier in the post) “it would be useful to do a more systematic study of fiscal austerity”. What about the many studies that have already been done (e.g. here, here or here). Do they not count because they generally find that fiscal policy can matter a lot, and so fail to accord with the faith? Do you want your macroeconomics derived from faith or from careful academic analysis?
Posted by Mainly Macro at 11:21