After the collapse of output of some 6-7% engendered by the financial crisis, output per capita grew by “just under 2%” from 2010 to 2013, whereas in 1981-84 and 1992-95 growth was over 8%. Wren-Lewis comments: “In short, the performance of the coalition government has been a disaster.” “Disaster” is a strong word from such a rigorous academic as Wren-Lewis, but I fully agree with him.

I like the idea - which is probably true - that rigorous academics generally refrain from calling things a disaster in print. Does that mean I’m not as rigorous as Keegan believes? I thought I’d try and justify my departure from this norm with some more data. It comes from a newly released dataset put together by the Bank of England. I’ve used it to calculate GDP per head over a much longer time horizon than I’ve shown before. Here it is. 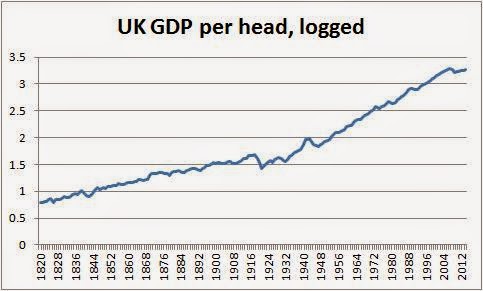 It is a story of two trends: one from 1820 to WWI, and another from the end of WWII until the financial crisis. Now whether this really is a good way to describe how the economy evolved over the last two centuries I will leave to others, but it is remarkable how well this simple idea of deviations around a constant trend seems to work for the UK economy. To see this more clearly, here is 1820 to 1913 with the trend drawn in. 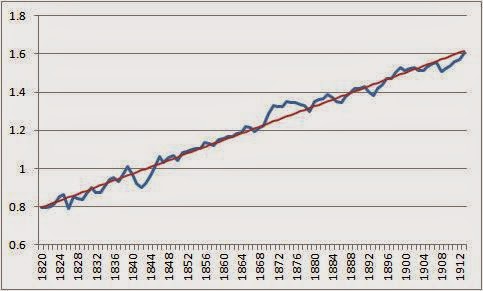 The trend growth rate is just under 0.9% per annum. Here is the equivalent graph since 1950. 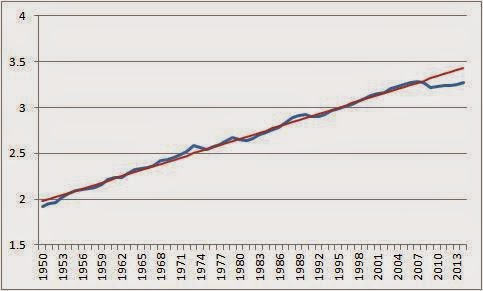 The trend growth rate, estimated from 1950 to 2010, is more than double that of the 1800s, at about 2.25%. Quite when and why the growth rate increased so much between the two world wars is a huge question, but my concern here is with deviations from these trends. Apart perhaps from two booms - the 1870s and the 1970s - large deviations from trend are short lived, with correction back towards the trend occurring pretty quickly.

The big exception, of course, is what has happened since the Great Recession. The deviation from trend just kept on getting bigger, and even with a fairly generous estimate for 2014 the best that can be said is that we might have started growing at trend again, so the gap has stopped getting any bigger. Even after the slump of 1919-21, GDP growth for the next four years was well above trend. What has happened since the financial crisis is unprecedented. This below average growth in GDP per head is one reason why real wages have been falling steadily over this period, which is also unprecedented.

It could of course be that what we are seeing is part of an adjustment to a new lower trend growth rate that was going on behind the scenes before 2010. That is what the methods used by the OECD and IMF (but not the OBR) assume. However they imply that 2007 was a huge boom in the UK, whereas all the other evidence says any boom was decidedly modest. It could be that these trends can suddenly shift after traumatic events. What is abundantly clear is that the last few years are no success story, and the constant drum beat in macromedia that the economy is doing well is completely inappropriate. A much better way of describing the last four years is to say it has been a disaster.