As I noted in my previous post, the very big government budget deficit in 2010 was largely the result of the recession. That fact is difficult to square with the myth that the coalition government rescued the economy from an impending financial crisis, so it is important to push another explanation for the large deficit: that it reflected the profligacy of the previous government.

Economic journalists know full well this is a myth. Yet it is a myth repeated on countless occasions by the coalition parties, and by journalists working for the partisan press. On one occasion one of these journalists tried to rubbish a post where I wrote it was a myth, and I hope learnt to regret the experience.

Just inspecting the chart in my last post shows this myth is nonsense. But the political commentators that are central to mediamacro seldom look at economic data. What they do remember of the pre-recession budgets of Gordon Brown was some criticism that he was not being as prudent as he might be. That memory is both correct (both the IFS and NIESR made that criticism) and the criticism is valid, as I set out in my study of this period. (To read the study free before the election, go here.) This is the half-truth that sustains the myth.

But mild imprudence is not profligacy. We can see that by looking at another chart, for the debt to GDP ratio. Profligacy would imply a rapidly rising ratio, but this ratio before the recession (37% in 2008) was below the level Labour inherited (42% in 1997), and below its fiscal rule figure of 40%. No profligacy there. 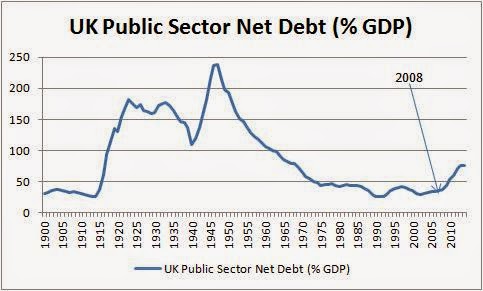 So the Labour profligacy argument on its own would fall apart, if it was not itself buttressed by another myth: the argument that the government should have been running large surpluses in 2007, because we were in the midst of a major boom. That myth is important and widespread enough to deserve a post of its own tomorrow.

One final point. There was no impending financial crisis in 2010, but there was a very real financial collapse in 2008. Even though Labour was not profligate, if it had been more prudent wouldn't that have given it more ammunition to fight the recession caused by the financial collapse? To the extent that Labour's countercyclical fiscal policy in 2009 was moderated by a worry about debt (which I suspect it was), this is a half-truth. But as Vicky Pryce, Andy Ross and Peter Unwin state in their book 'Its the Economy Stupid: Economics for Voters' (which I happily recommend, and which in its initial chapters covers much of the ground of this series):

I would also add that the Conservatives not only argued for even less financial regulation before the financial collapse, but opposed Labour's measures to moderate the recession in 2009.

Previous posts in this series
(0) UK mediamacro myths: an introduction
(1) 2010 Britain faced a financial crisis
Posted by Mainly Macro at 08:45