On cue to confirm what I wrote yesterday, Ryan Bourne at the Institute of Economic Affairs complains about the BBC coupling the Telegraph business leaders story with the CFM economists survey. [1] Mr. Bourne’s main gripe is that the CFM question on austerity was silly. The question was “Do you agree that the austerity policies of the coalition government have had a positive effect on aggregate economic activity (employment and GDP) in the UK?”

Why was it silly? To quote: “the overwhelming majority of even supporters of austerity would disagree with the question, because in the short-term they would also believe that cutting spending and raising taxes would dampen growth. Indeed, the OBR and others factored this into their models. It is well known.” And later on: “these proponents of austerity were willing to make a trade-off: slightly slower growth today, in order to achieve other objectives.” [2] So they would be forced to disagree with the statement, even if they agreed with austerity.

This tells us two things. First, it emphasises something I and others have occasionally said, which is how far austerity supporters have lost the intellectual debate. I remember not that long ago the arguments being about expansionary austerity, or how monetary policy could (would) offset any impact that fiscal policy might have on activity. Or it was about how we had to have austerity, because without it there would have been market panic. Apparently not - it was really all about current sacrifice for future gain.

Second, it illustrates the gulf between what most economists understand and mediamacro. In mediamacro, austerity was necessary because without it terrible things would happen (or at least there was a good chance of them happening). Not sometime in the future, but pretty soon. To quote the Prime Minister: “Britain was on the brink“. This of course is why some of the non-partisan media found the CFM survey interesting.

There is a huge amount in Mr. Bourne’s post that I could take issue with [3], but let me just focus on one point. He says: “Certain commentators are keen to claim that employment growth has only been strong because the productivity performance of the economy has been weak. This is an utterly bizarre claim.” He mentions this, of course, because the government is making great play over the number of jobs ‘they have created’.

To say that this is a bizarre claim is, frankly, bizarre? Let me explain why. No one disputes that our labour productivity performance over the last five years has been terrible. Here is a chart from the latest ONS release. 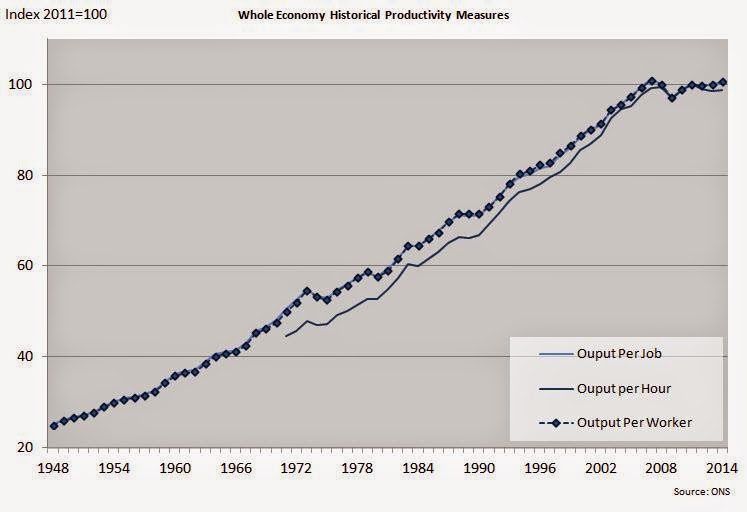 Note that a fall in productivity during a recession is not unusual. What is unusual is what has happened during the period of the coalition government. (See more on UK productivity from Ken Mayhew at the coalition economics site.)

[1] Mr. Bourne will have been pleased to note that, at least from what I saw, none of the evening news bulletins covered the CFM survey, while the business leaders’ letter retained its top spot. I’d love to know the reason for this change.

[2] Mr. Bourne gave three reasons why sacrifice now would lead to later gains: (a) lower borrowing costs, (b) preparing for the next recession, and (c) a smaller state increases productivity. As I have argued before, there is no evidence that at the beginning of 2010 interest rates on UK debt involved any noticeable default premium. I have discussed at length how we might be better prepared for the next recession, but strangely sacrificing large chunks of GDP today was not on my list. As for (c), look at the record on productivity.

[3] For example, the question Mr. Bourne would have rather seen is whether fiscal policy was the main cause of weak growth from 2010 to 2012, or whether external factors were more important? He does not say why this is a much better question. Of course the question Mr. Bourne would really like is why the economy did worse than the OBR expected, because the OBR were always expecting austerity to reduce growth. Personally I find questions like what impact did government policy have on the economy rather relevant, particularly coming up to an election.