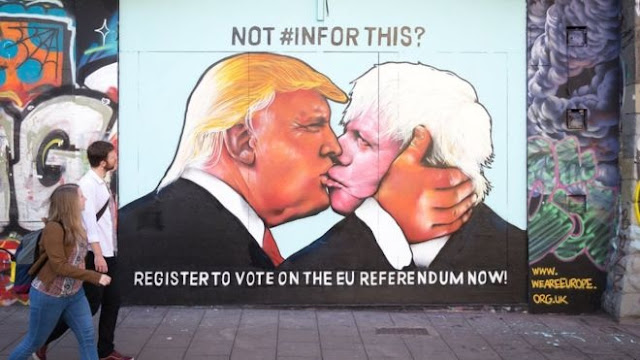 In the chaos that has resulted from the Brexit vote, not enough has been written about how this will almost certainly mean that we will have as Prime Minister someone who in many respects could be described as a British Donald Trump. They both benefited from privilege: in the US case with a large fortune and in the British case through class. They are both populists who gained and enhanced their popularity through the media, and most of the media loves them. They both have a habit of mendacity: you could almost imagine Johnson saying that the promise of £350 million a week extra for the NHS was ‘just a suggestion’. Nick Clegg, former Deputy Prime Minister, has described Johnson as like ‘Trump with a thesaurus’ when he says whatever he wants to win the Brexit vote.

Max Hastings, a well known journalist, historian, Conservative and former boss of Johnson, wrote four years ago that if Boris Johnson is the answer, “there is something desperately wrong with the question.” It is worth quoting later lines from that article:

“If the day ever comes that Boris Johnson becomes tenant of Downing Street, I shall be among those packing my bags for a new life in Buenos Aires or suchlike, because it means that Britain has abandoned its last pretensions to be a serious country.”

“I would not trust him with my wife nor – from painful experience – my wallet.”

“His chaotic public persona is not an act – he is, indeed, manically disorganised about everything except his own image management. He is also a far more ruthless, and frankly nastier, figure than the public appreciates.”

“I would not take Boris's word about whether it is Monday or Tuesday.”

In other circumstances you might think this kind of language was distorted by some personal animosity, but unfortunately it all rings true. Johnson has been sacked from two jobs for lying. As Sonia Purnell, who has written a biography of Johnson, says: “Voters, feeling lied to and let down, yearn to be able to believe in their politicians again. But Johnson, for all his claims to be an authentic alternative, is more the problem than the answer.” These traits were very evident in the Brexit campaign: he was happy to let lies like Turkey was about to join the EU pass if they helped him win.

He did not lead the Brexit cause because of any long standing commitment . As Nick Cohen writes:

As late as February, Johnson was saying that leaving would embroil “the government for several years in a fiddly process of negotiating new arrangements, so diverting energy from the real problems of this country”.


Instead his championing of the Brexit side derived from political opportunism. To be elected leader of the Conservative Party you have first to be chosen as one of two candidates by MPs. Before the referendum, although he was very popular among party members, he seemed not to have a great following among MPs, just as Trump is not popular among senior Republicans. Coming out in favour of Brexit changed that overnight. Once he had won and deposed David Cameron, he did not attempt to dispel the uncertainty he had created but preferred to firm up his chances in the forthcoming election for leader of the Conservative Party, and therefore become Prime Minister.

Boris Johnson plays the cultured aristocratic fool, and many love him for that. But if he becomes Prime Minister, as now seems almost certain, it may be the British public that ends up feeling played and foolish.