I got some stick on twitter the other day for my (longstanding) view that economics is in many respects like medicine. It is of course not exactly like medicine: as the man said, economics is an inexact and separate science. But think about what most doctors spend their time doing. They are in the business of problem solving in a highly uncertain environment in which they only have a limited number of clues to go on. They have solutions to a subset of problems that work with varying degrees of reliability.

If you read Dani Rodrik’s book Economics Rules (which if you have not you should, and can the person who borrowed my copy return it please!), you will see that economists have a large number of distinct models, and the problem that many economists spend their time solving is which model is most applicable to the problem they have been asked to solve. Where doctors have biology as the underlying science behind what they do, they also rely on historical correlations to see if the science is appropriate. Think about solving the problem of why there had been an increase in lung cancer in the middle of the last century.

The science for economists is microeconomic theory, now enriched by behavioural economics. Most of the models economists use are derived from this theory. But as Rodrik emphasises, the trick is to know which model is applicable to the problem you have been asked to solve. To help solve that problem, economists, like doctors, want data. Many have observed how journal articles are now more likely to be about investigating data than establishing theoretical results. Economists have recently started adopting the terminology of medicine in economic studies, talking about treatment effects for example. We both do controlled trials (for economists, mainly in development economics).

Sometimes the paths of the two disciplines cross (as they do all the time, of course, in health economics). One of the big empirical discoveries of recent years has been by Case and Deaton, looking at mortality rates of the US white population. Here is a key figure from their 2015 study. 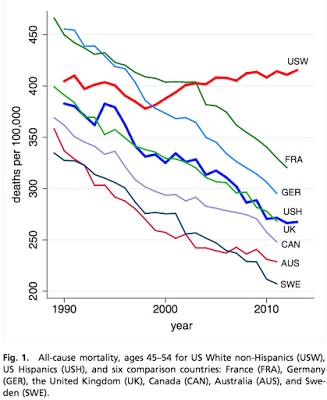 Mortality has been falling steadily almost everywhere, except since just before 2000 among US whites. Focusing just on the US, the problem seems to be mainly for non-college educated whites (this graphic comes from here). 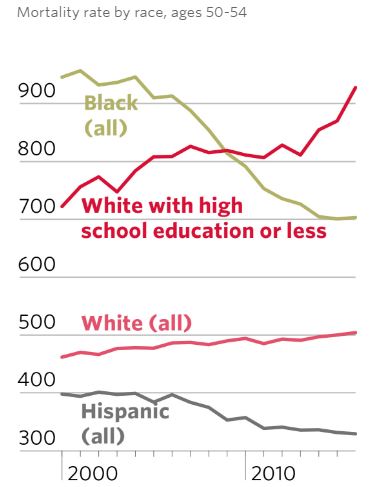 As with anything to do with race and class in the US, this work has been controversial, but some excellent analysis from Noah Smith shows that the problem suggested by the data is real enough.

Case and Deaton have a new study which tries to understand why this is happening. They describe it as evidence of ‘deaths of despair’. In each age cohort among this group, deaths from suicide, drug overdose or alcohol have been steadily rising. Some useful data is shown here. The interpretation the authors give for the despair is the decline in economic circumstances and status of the white working class in the US.

One of the factors that they describe as an ‘accelerant’ in this development has been the overprescription of opioids drugs that provide short term pain relief, but which have negative consequences in the longer term. US policy over the last 20 years has led to what some describe as the

“worst drug epidemic in U.S. history. Enough opioids are prescribed in the United States each year to keep every man, woman and child on them around the clock for one month.”

“It is hard to believe that medicine, which prides itself on empiricism, could have taken such a wrong turn.”


Of course individual doctors make mistakes all the time, but the profession as a whole can make major mistakes. It is of course subject to pressures from individuals and large organisations (drug companies). In this, again, it is like economics. 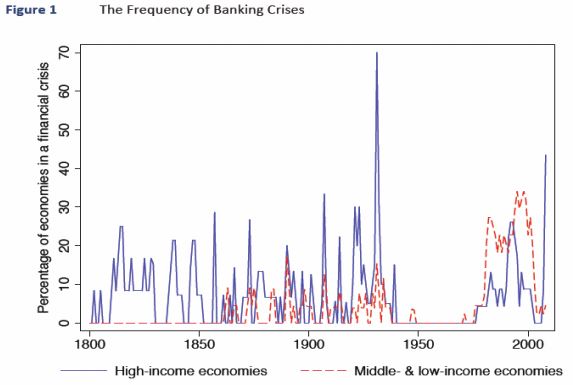 The blue line shows the percentage of high income countries experiencing a financial crisis each year. Crises were endemic until after WWII, when it appeared for two decades or more that they were a thing of the past. In the 1980s they returned, but without any major impact on high income countries. Then there was Japan’s lost decade, and plenty of papers were written about how that was a particularly Japanese problem. The 2000s seemed quiet, and some called it the Great Moderation, until the global financial crisis arrived.

Looking at this chart, it is hard to believe that economics, that prides itself on its empiricism, could have made the mistake of believing that now things were different. But economics, like medicine, can make big as well as small mistakes. The point I want to make here is the different nature of the response to these mistakes from outside these disciplines. No one says that medicine has failed us, and we need to find fresh voices. No one will say that ‘mainstream medicine’ is in crisis, and we need to look at alternatives.

They do not say that because it would be stupid to do so. With the opioid epidemic something has gone very wrong and it needs to be corrected, and the same is true for economics and the financial crisis. So why the overreaction when it comes to academic economics? One reason is that doctors are not generally asked how long people will live, and even when they do their forecasts are not published almost every day in the press. Most economists are as honest as doctors would be about that kind of unconditional forecasting, but it suits the media to appear shocked and surprised when things go wrong. Another reason is that ordinary people can see doctors doing good things all the time to themselves, their friends and families, but the work of economists is felt less directly. It also seems intuitive that medics are in some sense better than economists, although how you could measure that I do not know. Both factors may explain why medicine is internally policed to a large degree (doctors can be stopped from practicing), whereas economics is not.

Another big difference involves politics. Economists bring unwelcome news to both left and right, so it suits both sides to occasionally bash the discipline that brings the message. We have seen a great deal of that from the right over Brexit. For the left more than the right there are also non-mainstream economists who have an interest in arguing that the mainstream has been corrupted by ideology. Quite why so many on the left choose to attack mainstream economics rather than use the mainstream to attack the right I do not know. All I do know is that they have been doing it for 40+ years, as I remember being told by many economists that the mainstream was fatally flawed back in Cambridge in the early 1970s, which was before Thatcher and Reagan.

But these differences should not obscure the similarities between economics and medicine. We both deal with people, and their mind and body can be pretty complicated whether as individuals, or as a society. In some areas we have developed quite detailed degrees of quantitative understanding that allow us to make successful interventions (more so than in other social sciences I suspect). In other areas we do things that work most of the time but sometimes fail, but there are many important areas where if we are honest we do not have any real idea of what is going on. So we make mistakes, which can sometimes be extremely costly for huge numbers of people, but we also learn from these mistakes.