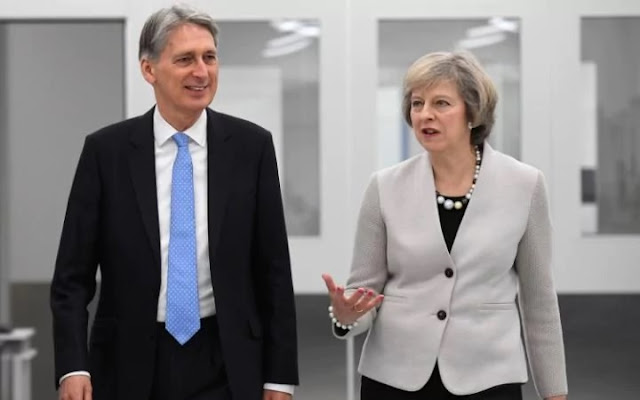 There has been much talk of Re-leavers: those who voted to Remain but are now voting for Theresa May to get the best Brexit deal. I had talked about something similar long before the term arose (see here and the previous linked post), so I do not think this is just an artifact of particular poll questions. But I’m also sure that this is not the only reason many Remainers will vote Conservative.

Some, as Ian Dunt suggests, just believe that Brexit is inevitable (as you would based on most of the MSM [1]), and that May would be better at negotiating our exit than Corbyn. Others always vote Conservative because they belong to particular groups in society, and they are sure that party will - whatever happens - protect their interests over others. Think the typical Times reader for example. If we are talking about what you might call the affluent middle class, their assumptions have a solid empirical base.

This becomes important once you recognise the dismal economic outlook that faces the UK over the next decade. Productivity growth has virtually stopped. That means that, on current policies, growth in output per head is likely to be pretty slow. In addition, the Brexit depreciation will reduce real incomes, a process that has already begun. Finally May seems determined to reduce immigration as far as she can, which if it happens will damage the public finances.

Think of both the Conservative's core support and these dismal economic prospects in trying to decide how seriously to take the interventionist proposals in Theresa May’s first manifesto. (For good background discussion on this written before the manifesto was published, see Rick here and Geoffrey Wheatcroft here.) The words in the manifesto are certainly different: for example

"We do not believe in untrammelled free markets. We reject the cult of selfish individualism. We abhor social division, injustice, unfairness and inequality. We see rigid dogma and ideology not just as needless but dangerous."


Furthermore some of the proposals would have been condemned as socialist nonsense in certain quarters if they had been made by another party. For example a cap on energy bills, worker ‘representation’ on company boards, more council housing, a ‘modern industrial strategy’, and of course more measures to discourage (and maybe control) immigration. Now not all of these measures require serious money, but a lot of them do if they are to be meaningful. And, unlike the Labour or LibDem proposals, the Conservative’s plans are completely uncosted.

As a result, it becomes imperative to ask how much each measure will cost, and where the money comes from, because that will reveal a basic contradiction between rhetoric and reality. It is extremely difficult if not impossible to tackle social division and inequality if you want to protect your core supporters and are not increasing the size of the cake. You could find the money by raising taxes on business, but given Brexit the Conservatives are unlikely to reverse their cuts in corporation tax. (Not so much because of their economic effects, but to preserve the support of the business community which has become strained by Brexit.) You could find the money by raising taxes that largely impact on the better off, but that risks losing your core support. You could put fiscal rectitude to one side, but that would seriously tarnish the brand.

Given these contradictions, the rhetoric above is only likely to be accompanied by token gestures in reality. The most obvious thing May could have done to help the just managing family was to scrap the proposed cuts to in work benefits, and she did nothing. To be able to address inequality and social division without taking away from the better off you need a growing economy. The tragedy for Theresa May is that her insistence that Brexit means controlling immigration ensures [2] that is very unlikely to happen, and it is not clear she realises this.

But surely the change in rhetoric must mean something? The start of a Red Tory era, or the re-emergence of pre-Thatcher Conservatism, or at least the death of neoliberalism in the UK? I will start to believe those things when the IFS starts expecting falls in child poverty, rather than the - policy induced - increases they project. I will start to believe it when the pledge to introduce inequality enhancing Grammar schools is dropped. Until then, I suspect all we may be seeing is the same grasp of economics May has always displayed in government: she wants everyone to have more, while implementing policies that impede economic growth. I fear this Red Tory may be another symptom of the disease that hit the UK with Brexit. We are in the 'have your cake and eat it' era, an era that through its own contradictions cannot last.

[1] The MSM where I fear the idea that the current fall in real wages is down to Brexit is now a ‘contested view’, thanks to recent remarks by the Prime Minister.

[2] Both directly through the impact of lower immigration on the public finances (uncontested by the Conservatives, perhaps because it comes from the OBR), and indirectly because it means we have to leave the Single Market.
Posted by Mainly Macro at 08:32