Still not getting it after all these years

I met Nick Macpherson, the most senior civil servant at the UK Treasury from 2005-16, for the first time (I think) a few weeks ago. It was at a conference about, among other things, getting economic ideas across to the public. He is also on twitter, and I saw the following exchange between him and Tony Yates. 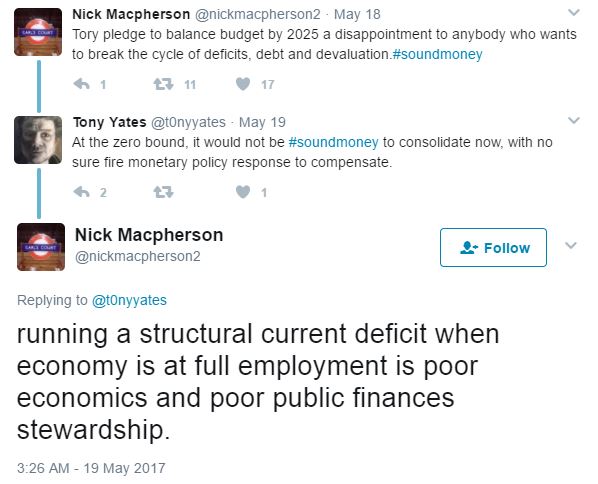 To be fair to Nick, I get many people saying the same thing: we are at full employment, so we should not be running deficits. Let’s not on this occasion discuss how we can be at full employment when nominal wage growth is so weak, or into the distinction between current and total deficits. The main point that Tony makes above is that you cannot discuss what an appropriate fiscal policy setting should be without thinking about monetary policy.

There was one reason, and one reason alone, that we had fiscal stimulus in 2009. It was because nominal interest rates had hit their lower bound. A recession in itself is not a sufficient condition for a fiscal stimulus if monetary policy can do all the work of getting us out of the recession. [1] But when interest rates are stuck at their lower bound, monetary policy has lost its ability to regulate the economy, which means we are either stuck in a recession or are vulnerable to any negative demand shock. Unconventional monetary policy, although better than nothing, is far, far less reliable than conventional monetary or fiscal policy.

It is therefore a prime duty of government to ensure that, if interest rates have hit their lower bound, fiscal policy is solely directed at allowing monetary policy to raise rates. This idea is not new. It was always implicit in New Keynesian theory and what I call the Consensus Assignment. Paul Krugman, Brad DeLong and others have been going on about it at least since the financial crisis. The idea should be part of any fiscal rule, as Jonathan Portes and I suggest here, and this is still part of Labour’s fiscal credibility rule.

In the UK, at this very moment, we are once again at the lower bound for interest rates. That means fiscal policy is currently too tight. Whether we are at full employment is neither here nor there. Interest rates are at their lower bound because the negative influences on aggregate demand are more than monetary policy can handle. One of those negative influences is fiscal consolidation. That fiscal consolidation should wait [2] until interest rates are safely clear of their lower bound.

This is not one particular theory of monetary and fiscal policy interaction. It is the consensus theory. That it is not understood by the public is understandable given mediamacro. But not being understood by senior civil servants (and I doubt Nick is alone here) when they are free to speak their minds is much more surprising.

[2] It can wait because there is no problem in financing the deficit, and because we print our own currency there has never been any such problem.
Posted by Mainly Macro at 08:12